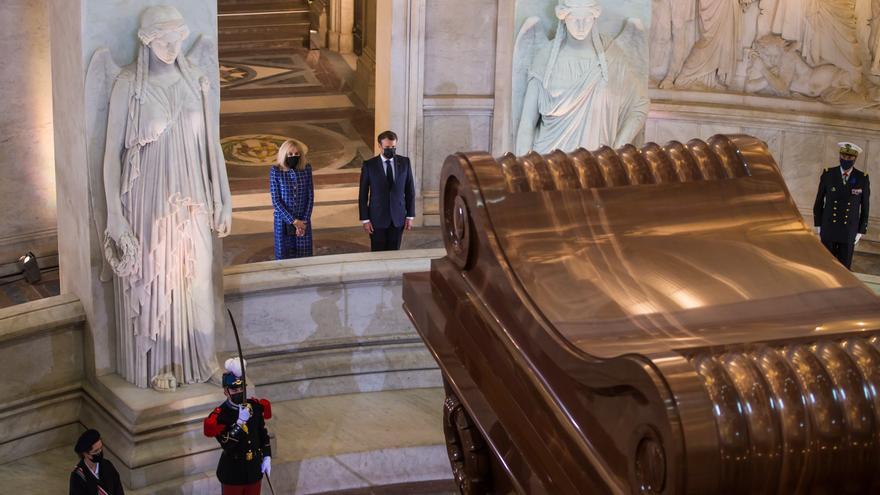 Paris, May 5 (EFE) .- In the midst of the controversy over the figure of Napoleon in France, divided between supporters of commemorating the bicentennial of his death and those who consider him a tyrant, French President Emmanuel Macron took office on Wednesday his inheritance "marked by errors and actions that have shaped the nation."

Both, said the president, are part of a past that deserves to be "looked at in the face" in the name of "the fight against ignorance" to advance knowledge of the present and to continue building the future.

"Napoleon is part of us," said the head of state in a solemn speech at the Institute of France, which brings together the different academies of the country, from that of Language to that of History, before depositing a wreath of flowers in the tomb of the emperor.

Faced with pressure from an entire part of the country that denigrates the figure of the man who dissolved the Republic with a coup d'état, who sowed Europe with corpses in his deadly military campaigns and who reestablished the slavery that the Revolution had abolished, Macron took sides for attending the commemoration of the emperor, who died on May 5, 1821 in exile in Saint Helena.

The president thus broke with the distance that his predecessors had kept with Bonaparte: Neither the conservative Jacques Chirac nor the socialist François Hollande participated in Napoleon's ephemeris during his stay at the Elysee.

Nicolas Sarkozy, who did not have any during his tenure, was on Thursday as a spectator at the bicentennial of his death, the first to have a sitting president since Georges Pompidou attended the 200-year anniversary of his birth in 1969.

Macron did not shy away from thorny issues, he accused Bonaparte of having "betrayed the spirit of the enlightenment" by reestablishing slavery in 1802 and of having forgotten the value of human life in his many battles.

"Since then, we have known how to place life above everything, even a pandemic," said Macron, who a year after the presidential elections claimed the figure of Napoleon as a reference without whom "the fate of France would not have been the same. same".

NAPOLEON IN THE ELECTORAL FIELD

Macron thus placed himself on a similar plane to that of the far-right Marine Le Pen, who all polls place as her great rival, and who has not hesitated to praise the emperor.

The president was more prudent, justified a "clairvoyant commemoration" in the face of an "exalted celebration" and asked that his figure continue to be studied to "know what Napoleon made of us and what we have made of Napoleon."

He assured that the emperor "understood that he should seek the unity and greatness of the country" and export the values ​​of the French Revolution throughout Europe.

It did, it is true, through the war, the president acknowledged, who warned about those who "want to carry out an anachronistic process that consists of judging the past with the eyes of the present."

The president spoke to the country's academics and listened to the historian Jean Tulard, one of the leading specialists on Bonaparte, who recognized that "a golden and a black legend" circulates about the emperor, but defended an increasingly serious historiographical work.

The historian gave as an example the action of Napoleon in Spain, where he "despised the people" and saw how "the best Army in the world could not win against the pride of a nation."

CEREMONY BEFORE THE GRAVE

The critical equidistance was parked when Macron went to the Palace of the Invalides to deposit a crown on the monumental tomb of Napoleon, accompanied by Jean-Christophe Napoleon Bonaparte, heir to the imperial dignity.

The acts, excessive for some, minimal services for others, were the climax of a year of celebration of Napoleon marked by the pandemic, which has tarnished many of the planned events.

The improvement in the country's health situation seems to allow some of the scheduled exhibitions to be opened to the public by the end of the month, such as La Villette, which brings together some of the emperor's most personal objects, such as a carriage, weapons, porcelain or furniture. .

This exhibition, with which the organizers hoped to break the record of public attendance held by that of the treasure of Pharaoh Tutankhamun, is accompanied by others, such as the one exhibited in the Army Museum with elements related to his death.

The year has been marked by the publication of numerous works about a character of which, according to Tulard, more than 80,000 books have been published, one for each day that has passed since his death.

Another symbol of the fascination he arouses is the success found in the auctions of objects related to his figure, from the golden leaves of the laurel wreath that he wore at his coronation to locks of hair or parts of his personal wardrobe.