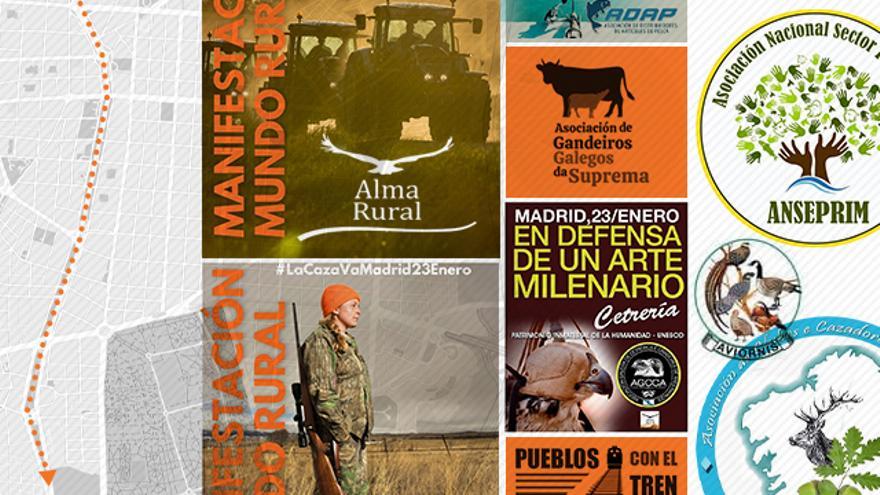 Pet sellers, exotic spider enthusiasts, camel-riding companies, fighting cock breeders, circuses. Everything has fit to enlarge a march this Sunday through Madrid self-styled "of the rural world" in which -also- there are livestock groups, farmers and many organizations of hunters and bullfighting.

The formation of a kind of rural opposition front to the Government has led to a leadership dispute based on separate marches through Madrid with slogans such as "Basta ya!" or "It's time to put things in their place!" This demonstration, organized by an association called Alma Rural, is held on January 23, but in just two months, on March 20, another demonstration is called under the slogan "together for the countryside" under the umbrella of the Spanish Federation of Caza, the Asaja employers' association, COAG and another association called Alianza Rural.

Like the first, this call is awarded the representation of the rural. Both affect messages of confrontation: urban world against rural world.

Meanwhile, the far-right Vox party has taken advantage of the image of discomfort that has been drawn and promotes the demonstration despite having voted against the law that prohibits offering farmers prices below their costs last December or encouraging the implementation of macro farms.

Those of Santiago Abascal sneak their slogans into messages related to the demonstration, such as that they are "the only party willing to combat globalist policies that want to end the rural world" or "with rural people as a priority on their agenda." this week they went warming up the call from official accounts claiming to be "the voice of the ranchers against the Government." And also mixing groups: "We support our farmers, ranchers, bullfighters and hunters in the face of government attacks."

"The only demonstration that is prepared and is going to be held in Spain in the rural world is going to be on January 23 in Madrid. There are no more demonstrations," Abraham Corpa Martínez said in a video-harangue distributed by mobile messaging groups. , from the Alma Rural team. Its general secretary, Carlos Bueno, admits that these words "create a feeling of division." But he blames the organizers of the March march: "We have tried to reach an agreement to go together, but on their part there has never been any intention of getting together."

If the one who hits first, hits twice, the march of 23E takes advantage, since it plans to launch horsemen, ox-drawn carts, tractors and falconers along the Paseo de la Castellana.

"They are now yes with the macro farms. You are talking about the emptied Spain. Well, make macro farms! Abraham Corpa lights up in his audiovisual statement. "What problem is there now with the macro farms? Why do 50 people smell the towns? If in the villages there have always been chickens, roosters, pigs... what do you want? For this reason, please, on January 23 all of Spain should be in Madrid. At least the whole rural world. If you're not, then don't complain," he concludes.

The rival call for March has placed the slogan "They censor our culture and traditions", but Alianza Rural has not replied to elDiario.es. This organization is chaired by the rancher and rejoneador Fermín Bohórquez Domeq, president of the bullfighting bull breeders. At his side are, among others, Pedro Barato, president of the Asaja agrarian association; Manuel Gallardo, president of the Spanish Hunting Federation; or José Luis López-Shummuer, who was president of the Anfac automobile association and now directs the Fundación Artemisán hunter lobby.

In February 2020, just after the coalition Executive between the PSOE and United We Can was formed, the association at the head of this march, Alma Rural, published a statement that said: "We already have enough problems that negatively affect the entire population and especially the rural world". Without any measure having been approved, he enumerated the problems: "The extortion and blackmail suffered by Agriculture and Livestock, speculation around farmland, unemployment, labor, immigration, the self-employed, the serious economic situation that we all suffer, tax increases, pensions, health, citizen insecurity, the situation in Catalonia..."

What will parade through Madrid is a totum revolutum. They have signed up from an Intereconomy television program to brotherhoods of the pilgrimage of El Rocío, although there is no project in sight to eliminate bullfights or religious pilgrimages.

The associations of pet breeders and dealers stand out in the list: "Pets are a social good that contributes to the health and well-being of their owners", they have warned in an illustrated statement with guinea pigs, dogs, cats and parakeets, which they are not varieties especially associated with country life. In fact, in the city of Madrid alone, where the event will take place, there are nearly 400,000 pets, including dogs and cats only, according to the municipal census.

Similarly, the president of the World Association of Fighting Cock Breeders, Víctor Negrete, who has come to Spain from Peru for, he says, "the great march in defense of cultural traditions" in "the motherland".

The list continues with associations of fans of Venezuelan, Peruvian and Norwegian bulls. Some recreational boat importers who wanted to parade with boats through the center of the city have also signed up, although the Government delegation has managed to dissuade them.

"The enemy is not us, the enemy is the Animal Welfare Law. Therefore, one of the reasons for this demonstration is to interfere when it is still a blueprint to finish breaking it," says the person in charge of the organization. And under that umbrella almost anything has entered, although the whole has been labeled rural.

An example: the Federation of United Associations for Nature and Animals FAUNA wants more freedom to breed invasive alien species: "A responsible regulation to avoid the inclusion and condemnation of potentially non-invasive species in the list", they say. Organizations for fans of arachnids, reptiles or Koi carp (an invasive Asian fish now banned, but which was the star of aquariums) have come together in this niche.

Among so many diverse groups and claims of a cultural nature, there are also agrarian claims that now call into question much of the legislative work of the Ministry of Agriculture.

Although of the public interventions of Luis Planas after the hoax about the words of Alberto Garzón and meat production, the Minister of Agriculture will have to hear how they ask to change the value chain law which Planas described as "probably the most important for the agri-food sector in this legislature" and which has been in force for just over a month. Also the regulations of pig, poultry and cattle farms are in the spotlight.

The livestock group of the demonstration abounds in the meat hoax and places as the first point of its manifesto "to demand the cessation of attacks on the sector". Then he continues: "Spanish farmers produce proximity and quality meat with the highest standards of animal welfare."

In addition, they ask that "slurry be declared as usable by-products and not a polluting product." Spain has always failed to comply with current limits for ammonia pollution generated by agricultural waste. And it is before the European Court of Justice for contaminating the waters with nitrates that come from these activities.

They also want the recent decrees that regulate the basic standards of intensive farms to be undone and for the law of the food chain to guarantee "business benefits".

In this sense, dairy producers do not want there to be a limit regarding the "incidence of cattle farms in nearby towns and the distance to them", as included in the draft decree now in preparation. And they add that "farms, by housing animals, imply a concentration of elements innate to animals, such as: animals moo, bleat, cluck and make liquid and solid stools."

All this when the December 16, entered into force the new food chain law that includes an article for which buyers cannot acquire an agricultural product at a price lower than what it has cost the farmer or rancher to produce it.

PP and Vox voted against this text, which establishes that "the price (...) must be, in any case, higher than the total costs assumed by the producer or the effective cost of production." And that cost includes everything: seeds, plants, fertilizer, insecticides, fuel, energy, machinery, veterinary expenses, feed, irrigation, interest on loans and the hiring of personnel or the work of the farmer or his family on the farm.

All this, added up, is the effective cost and must be, by law from December 16, 2021, contained in the price of a shipment of strawberries, a batch of steaks or the milk that will later be sold in a supermarket.

Adhering to all these demands appears the hunting sector: the hunting groups of 23E copy almost word for word the demands already made by the organizers of March 20: unprotect the wolf, allow hunting and fishing in national parks, continue using lead, authorize the silvestrism or "the right to hunting education in schools."

Precisely the Government, through the Ministry of Agriculture, has drawn up a Hunting Management Strategy –required by law– that praises the figure of the hunters, attributes to them a good number of ecological and economic benefits and calls for a campaign to improve the image of the sector. It has not served to keep the hunters from taking the lead in the anti-government protest.