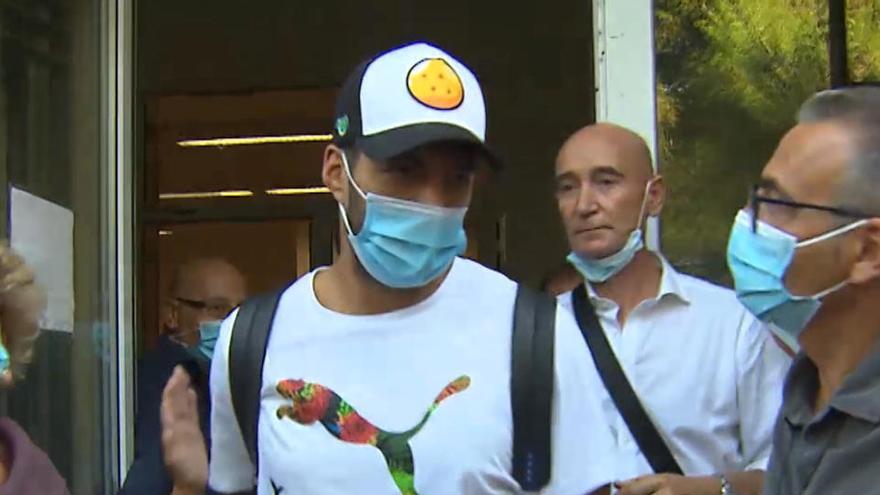 The Uruguayan forward Luis Suarez could not hold the tears in his farewell with the Barcelona, and noted that "in addition to a player, a human being who has feelings leaves."

Visibly moved and with a broken voice since his speech began, Suárez assured that "always" will be "grateful" to the club for "trust" that he deposited with him when he signed him in 2014.

"Barça knew in the conditions that it was coming, that it had made a mistake (the FIFA had sanctioned him with four months without playing for biting the Italian Giorgio Chiellini in the Brazil World Cup), and I will always be grateful to him for that, "he confessed.

Suárez's tears turned into a smile after a video with his best moments was shown in the 1899 Auditorium of the Camp Nou, where the act of his goodbye was held. "From here I take friends", assured the Uruguayan tip, wrapped in his farewell by his wife, Sofía Balbi, the four captains of the team -Lionel messi, Sergio Busquets, Gerard Piqué and Sergi Roberto- and also Jordi Alba.

He was also accompanied by the president of FC Barcelona, Josep Maria Bartomeu, that highlighted "his charisma, his human version and especially his sports version" and that "he is already part of the Barça legend."

And it is that Suárez goes to Atlético de Madrid as the third top scorer in the history of Barcelona (198 goals) and after lifting thirteen titles (1 Champions League, 1 Club World Cup, 1 European Super Cup, 4 Leagues, 4 King's Cups and 2 Spanish Super Cups) in six seasons.

"It has been to see a dream come true, but I never imagined reaching these figures. Here you must always perform at your best and you don't know how old you can be. I am leaving more than proud and satisfied with some spectacular and wonderful years at Barça, "he said.

He also remembered his friend Leo Messi, present in the room: "I agree that my children have seen me play with the best in the world," he stressed, referring to the Argentine star.

Although he admitted that he has not yet "digested" having to leave the Barça entity, he did not want to look for culprits in his departure. "I'm not going to please anyone. I'm going to leave like the great player I was at Barcelona, for the numbers and the history he has made in this club, "he insisted.

At 33, he assured that he has chosen Atlético, because he believes that he can still perform in a team of the highest level. "I feel empowered to continue playing in The leagueI'm really looking forward to it and I want to show that I can continue competing if not in Barcelona on another team, "said the Uruguayan, who started the applause of those present at the event on several occasions at a press conference full of emotion.