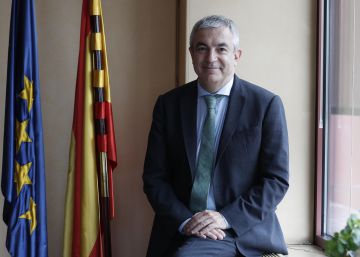 Economist at the head of Ciudadanos and equidistant with the leadership of the party in recent times of Albert Rivera, Luis Garicano won his post as deputy in the European Parliament last year and is also the vice president of the Renew Europe group, successor of the Alliance of the Liberals and Democrats for Europe. From that position he works so that the EU aid comes to fruition. But he warns that the image of Spain in Brussels is very deteriorated and insists that the country has to be the first of the class to regain credibility. He affirms that a rise in the salaries of civil servants and pensions in the General State Budgets would have “a very negative reading in Europe.”

How do you see the government’s plan for the money from the European recovery fund?

The strategy of asking for direct aid first and then for loans [unos 70.000 millones de euros en cada caso] is it adequate?

Spain needs all the funding to fight the crisis we are in, and the European one is much cheaper than the one the country gets by its own means. I would prefer that you use the financing available now.

Does the EU look at Spain with a magnifying glass?

There begins to be concern. In 2007 and 2008, Spain was considered a normal country in the European context. Between 2008 and 2012 there began to be a bit of general suspicion, and now we run the risk of aggravating that suspicion and leading people to believe that we are not a serious country.

What do you think of Nadia Calviño’s economic forecasts?

The growth forecast for 2021 of 9.8% counting on European funds seems very optimistic to me. There is no forecast of income, only of expenses, the deficit is taken from the sleeve, and the 27,000 million Europeans practically replace the gross formation of fixed capital of the previous year. In that sense, I do not see transformative ambition in the Budgets.

So, how is the eventual support of Citizens for the Budgets?

I do not enter that, that issue is being taken care of by my party colleagues who have that task.

From the outset, the Government foresees increases in the pensions and salaries of civil servants. What is Europe thinking about this?

From the point of view of the European Commission, in a situation of practically an economic catastrophe, if pensions and civil servants’ expenses are raised, it will appear that Spain is not aware of the structural situation of finances in the coming years. It is going to have a very negative reading in Europe.

He has told the European Parliament that “it must be avoided that there are governments that use the money to create similar economic elites and client networks with which to perpetuate themselves in power, European funds cannot be used to pay for an advertising campaign to the country’s president shift”. Is this a risk in Spain?

Yes I see it, I am concerned that there is no reconstruction and reforms office. It is Moncloa, and the chief of staff of the Prime Minister is a person in the field of communication, whose main concern is the story and the electoral campaign instead of governing. It does not come from the state sphere and is concerned with electoral success, not with making sure that Spain makes the reforms it needs.

But there will be a control by Europe of projects and money, right?

That is the wish of my group and what we are negotiating now in the regulation, which is not ready yet. I hope it is demanding, with concrete milestones, numbers, compliance and transparency. That is what we are going to try. The only hope right now is that governance comes from Europe, because the institutions, the Government and Parliament are in a confrontational situation with a lot of politicking and little high-ranking politics.

The president of the Community of Madrid has said that “the most important thing is that the economy does not suffer more” in relation to the management of Covid-19. Is there a conflict between economy and health?

Could there be problems with the financial system?

We all thought in May of a symmetrical crisis, which would have allowed a simple answer because all countries would be in the same boat. What we see now is that it is a very, very, asymmetric crisis, more than the financial one that broke out in 2008. In other words, Spain is going to have growth eight or nine points worse than the northern European countries. Faced with eventual financial problems in these countries, it is not clear that the northern countries are going to allow common European instruments to be used for this.

The ECB is acting with debt and liquidity purchase plans for the banks. If the asymmetry worsens, is there a risk that I will abandon these measures?

The risk is political rather than economic. If countries behave well, there is no reason why the ECB should not follow through. But it may be that in Holland, Germany or other countries there is growing reluctance, especially if the feeling spreads that Spain is not doing its homework. There are two uncertainties: the support of the ECB and the suspension of the stability and growth pact. Until 2021 we can let the deficit run, but from then on, in principle, no.

But that would be a catastrophe for Spain and other countries …

It is necessary for European support to continue, not to stop, because if it stops, we will have to ask for extensions. That is why it is so important to be the best student in the class. Spain has to be aware that it needs credibility to maintain that support.