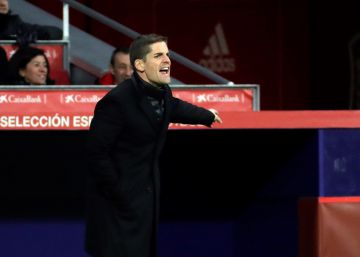 As this newspaper advanced the day he announced his last list of called as a coach, the possibility that Robert Moreno did not sit on the bench in the next Eurocup if Luis Enrique decided to return to training is about to be confirmed. "It is closer to taking over," a federal employee admitted Monday. Moreno did not appear before the media at a press conference after the victory against Romania after saying goodbye to his players. The decision taken by the president of the Federation, Luis Rubiales, to offer the position to the Asturian coach began to take shape with the two draws and the image given to Norway (1-1) and Sweden (1-1). Since then, neither the president himself nor the sports director, José Francisco Molina, ruled out that, given the possible return of the Asturian coach, Moreno had to take the step to the side that he announced the same day he took over.

The commitment acquired by Rubiales with Luis Enrique, in the conversation in which he announced that he was leaving the team, to open the doors has been fulfilled. For several days, from the Federation they were already preparing the ground sliding that this was the project of Luis Enrique and that only the fatality of the death of his daughter placed Robert Moreno at the head of the selection while ensuring that only if the If he was his boss, he decided to return, he would take over. There have also been informal polls to the press to gather opinions.

Communication, according to federative sources, between the leader and Molina with Luis Enrique has been frequent, with visits included to Barcelona. They began as simple conversations about the mood of the coach after the death of his daughter who expanded to football. At that point Rubiales began to detect that the possibility of achieving the return of the Spaniard was viable. Molina didn't seem so clear, nor did the dressing room. Last week, during the rally, Sergio Ramos told the internationals that they were interested in the matter that there was little chance of being relieved. Nevertheless, Rubiales stoked the fire of doubts by refusing to ratify Moreno in the face of the European Championship. Moreno himself, on Sunday, in the previous match with Romania, took his continuity for granted, following Rubiales' words. “I don't need to sit down with Rubiales and Molina because they have trusted me and have always told me things in the face. I give more value to that than to what can be perceived from the president's response in a mixed zone, ”he said in an appearance in which he gave himself nervous and annoyed at the information that pointed to his relief. "I give myself a ten," he added about his work.

Moreno's continuity within Luis Enrique's organizational chart is also not guaranteed. In the Federation they say that "you can fly alone". The president, Rubiales, called a press conference with Molina on Tuesday at 12.30 p.m.