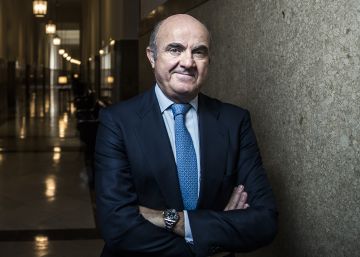 In spite of carrying little time as seat mates, Draghi and Guindos are old acquaintances. They coincided in the Eurogroup meetings from the end of 2011 until March 2018, when the Spaniard left his minister's portfolio to prepare for the jump to Frankfurt. There, for example, the European bailout to Spanish banks was cooked in 2012. A few days after saying goodbye, Guindos highlights two fundamental aspects of Draghi: his ability to generate consensus to boost the decisions that Europe needed and the modernization of the body that is about to leave.

Question. Central bankers have acquired unprecedented relevance. Would it be desirable for them to return to a certain grayness?

Reply. There has been an excess of prominence of monetary policy because other policies have not acted. That's not good.

P. Mario Draghi is about to leave the presidency of the ECB. How will you be reminded?

R. His mandate was marked by the debt crisis, bailouts from three countries, the borderline situation in Spain and Italy and the real possibility of expelling Greece from the euro. With a phrase, he showed that he would keep the currency and marked the beginning of the recovery from 2013. His second big moment is the massive purchase of assets. Despite the difficult decision making at the ECB, it generated a consensus to implement a policy that was then strictly necessary. And so he modernized the tools of the ECB, putting it up to the Federal Reserve or the Bank of England.

P. His latest measures have been much criticized. Draghi himself has recognized that the side effects are increasing. Isn't it contradictory to say that the ECB has room to act and at the same time warn of the adverse effects of its policies?

R. We must find a balance. We try to act and do our part, but time shows that the side effects are increasingly evident. Central bankers are not all-powerful. We cannot solve problems such as the commercial war or Brexit. Fiscal policy, structural reforms or the banking union must contribute. If not, the side effects will be larger. That is what we want to avoid.

P. Are the fiscal plans announced by governments such as German or Dutch enough?

R. The framework of fiscal policies – national policies and the Stability Pact – are not enough to cope with a profound slowdown. With the current framework, the possibilities of complementing monetary policy are very small. Therefore, I am convinced of the need for a centralized and independent fiscal instrument. It would also be an aid for national fiscal policies.

P. The ECB has not met its inflation target since 2013. Have you failed in your price stability mandate?

R. Let's not forget that the risk of deflation was avoided, which was very dangerous. It is true that inflation takes time below the target, but that is due to structural changes for which we still do not have all the explanations.

P. Does this damage the credibility of the body?

R. No. We would have had a credibility problem if the deflation had settled. The question is why wage increases do not transfer to inflation. That is one of the legacies of the crisis of 10 years ago.

P. What is Lagarde's biggest challenge?

R. On the one hand, the depth of the economic slowdown. We expect growth slightly above 1%, but with downside risks. In the financial field, the biggest challenges are the very low profitability of the bank, the risks derived from low rates and the assets under management of the fund industry, which have grown tremendously.

P. The ECB's policies have had an unwanted effect of income redistribution.

R. They have had a certain negative effect on savers or a possible rise in the price of assets, but also a positive one thanks to economic growth, job creation and improved wages. According to our calculations, the net effect has been two more points of growth. Thanks to what the ECB did, the situation in Europe has nothing to do with that of 10 years ago.

P. The more political and less technical profile of the ECB has been criticized with Christine Lagarde and you in front, both former ministers without experience as central bankers.

R. Monetary policy must be a piece that fits the economic policy. Having experience in other fields is good. Sometimes, central bankers have been in an ivory tower. Not to mention me, Christine Lagarde knows perfectly the mechanisms of the euro zone. Those responsible for the ECB must understand the situation, choose the alternatives correctly and communicate it appropriately. And this Lagarde will do it very clearly.

P. Internal criticism, resignations, leaks interested in the press … The divisions in the ECB seem to have exploded in recent weeks.

R. It is curious that sometimes there is more politics in a central bank than in governments. Now seriously: the 25 members of the Governing Council should try to generate a consensus. And when a decision is made, it must be defended.

P. That is not happening now. Do these fights harm the ECB?

R. I would not say that they damage it, but they certainly do not facilitate the effectiveness of the policies.

P. Criticisms of Draghi rise in tone in northern Europe. Do you fear a distancing from the European project in countries like Germany?

R. You have to make a communication effort. The ECB has provided reduced inflation and a favorable environment for Germany to take 10 years with significant expansion. Germany has done much better with the euro.

P. In the last vote, critical votes came from countries with more than half of the eurozone population.

R. In the Executive Committee I do not represent Spain. We must act thinking of the entire eurozone. A system of a country, a vote, as in the Governing Council of the ECB, is especially democratic to avoid imbalances in decision making. But it is clear that Germany must be paid attention. If Germany stops, it affects us all. We are all in the same boat.

P. Could the arrival of Lagarde limit some of these tensions?

R. I don't think there will be a sudden change at all. I am convinced that everyone on the Governing Council will collaborate with Christine Lagarde with absolute loyalty from the start.

P. The ECB has just lowered its growth forecasts, but some consider them still too optimistic.

R. The slowdown comes from the foreign sector, which greatly affects countries like Germany. If it goes into recession, it will be a technical recession, from which it will rebound quickly. The risk is not so much the recession, but to enter a prolonged period of very moderate growth, below 1.5%. That is why it is necessary for other actors besides the European Central Bank to intervene.

P. Is the eurozone ready for a Brexit without agreement?

R. In the financial field, yes. But the fundamental impact would not come from there, but from the impact in the United Kingdom, the second European economy. Contingency plans have been prepared in the financial sector, but in others not so much.

R. Spain has grown more than the average since 2013, but no one escapes the global slowdown. I would put a note of caution: the Spanish economy can avoid a recession if mistakes are avoided because it is much better prepared than in the past. It is more competitive, its banking sector is more healthy and has less private debt.

P. And a public debt close to 100%. Were fat cows wasted to reduce it faster?

R. A very important effort has been made. Spain came to have a deficit of 11% and this year will be around 2%. You could always have done more, but also less.

P. How much does the current political blockade weigh on the economy?

R. I do not comment on internal policy issues of the countries. I can only say that I was almost a year of acting minister. And it is not nice. A cyclical slowdown is coming, but certainly not a crisis like the one in 2008.