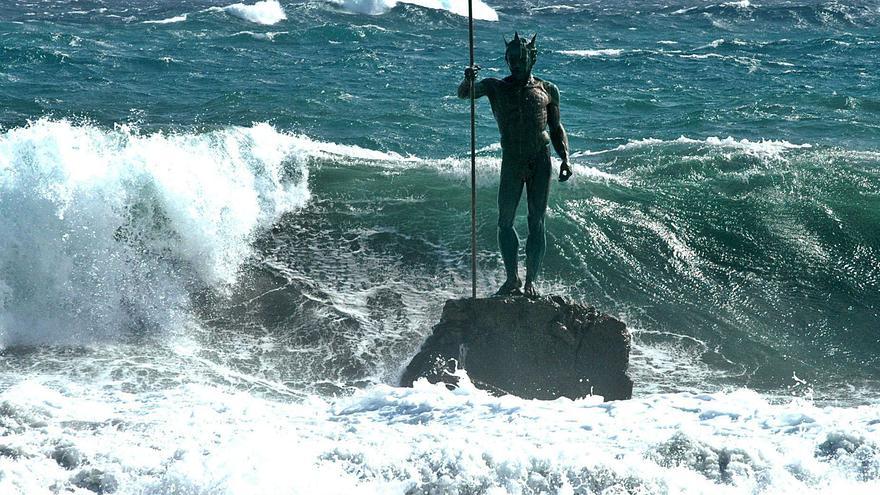 Emperor remembers his exhibition at the S / T gallery in the capital of Gran Canaria of 23 busts and five engravings on his peculiar vision of the inmates of the Leganés psychiatric hospital, with whom he spent hours sharing with them and taking notes of their gestures and physiognomies.

At the discretion of the president of the AICAV, Arencibia “leaves a very interesting work”, of which the altarpiece of the church of San Agustín stands out “, or that collection of disturbing busts that he showed in Las Palmas de Gran Canaria in 2018 and, of course, “the Neptune of Melenara”, which he describes as a success, and for which he calls for greater attention to preserve its conservation “by the Telde City Council, since his disappearance, sentence,” would be a great loss ” .

If Neptune is the Roman god who ruled the waters, Triton is the Greek deity who ruled in the depths, and also the work of the Gran Canaria sculptor Manolo González, who not only share two imposing sculptures that reign on their own merits on the Atlantic coast, but also the exhibition space that Arencibia created in Leganés, through a work entitled Milenia, which has been in the Sculpture Museum since 2004.

In this sense, he believes that the projection he made of the canaries on the continent “is a work that has not been recognized” and he considers that “the time has passed” for us to have let him know and thank him in life. There are works by Ángel Ferrant, a friend of the chisels of Manolo Millares and Martín Chirino with his texts that extol them in the middle of the last century, and also the latter with pieces in the museum, as well as Tony Gallardo, Susana Solano or Francisco Barón, among many others, with elements from the old Moncloa Museum, whose larger works could not be exhibited at the Reina Sofía center. To these pieces, Arencibia himself added others, “as happened with Milenia,” explains González.

But González also wants to highlight Arencibia’s human side, “his kindness, very generous, dedicated, hard-working and who put us canaries with wisdom and criteria in the peninsula, offering us visibility abroad. In this sense he was in solidarity with the islanders taking advantage of their situation there ”. The author of Tritón asserts that “I was always fascinated by his work, especially the one he carried out in the old asylum and then psychiatric hospital in Leganés, but in anything we had a lot of professional appreciation and respect, this despite the fact that for having his residence fixed there we did not maintain a regular contact ”.

He also underlines, as does the Emperor, his Neptune and the altarpiece of the Sagrada Familia in San Agustín, to which he adds, among others, a piece of a girl that evokes the Spanish post-civil war in a square in Leganés, and that, according to him, it contains “great finesse and depth, in addition to reflecting those dramatic times and episodes.”

Nor does it overlook the large amount of public work that he leaves in Telde, “resolute, portentous and with a good appearance, which denotes his preparation to face large-format works”. Working with these dimensions implies “knowledge in modeling, characters and textures, and it should be noted that he worked alone, he threw everything on himself.” He was just as dedicated in the aforementioned psychiatric hospital, “something that as a rationalist left me overwhelmed when I saw the affection and respect with which he spoke to the inmates to delve into those unique psychologies, and that he captured in some drawings that transmit the vibrations of those complex minds ”.

And as for the Neptune, perhaps his most emblematic work on the islands, Manolo González is blunt: “A marvel, because a piece does not refer only to the sculptural fact but to its room in the place. It was very risky choosing that location and it turned out very well because it gives rise to beautiful aesthetic episodes emerging on its rock, swallowing it by the sea and then reappearing among the waves in a superb image ”.