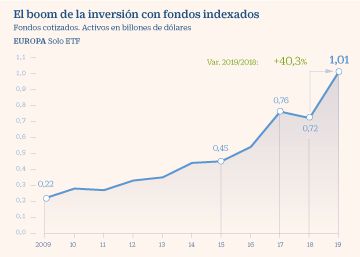 No trend in the asset management industry as powerful and transformative as the rise of low-cost funds. The money does not stop arriving at these listed vehicles, which replicate the evolution of stock indexes (S&P 500, Stoxx 600 …) or bonds. In Europe, the assets invested through this formula exceeded in 2019 the trillion dollars (about 900,000 million euros), a figure 40% higher than the one registered a year earlier.

This spectacular growth was due to a new record in the investment flows destined for these listed funds (ETFs). During the past year, 125,200 million dollars (112,000 million euros) reached the European ETFs. This amount comfortably doubles the flows received in 2018, according to preliminary data from the British consulting firm Etfgi.

Europe is thus adding, with a determined step, to a type of investment vehicle created in the United States over 40 years ago, but which has experienced exponential growth in that market during the last decade.

Worldwide, investment in funds and other listed products is already close to seven billion dollars (40% is in the United States). ETFs have their own characteristics of the shares, since they can be bought and sold instantly and constantly offer a net asset value, but they invest in stock and bond portfolios. The largest ETF in the world, the iShares Core S&P 500 (from BlackRock) has a size of 180,000 million dollars.

The great advantage of this type of investment vehicle is its cost. Traditional investment funds (also called assets) have teams of managers dedicated to analyzing countries, sectors and companies to find opportunities, which raises expenses. The commissions that apply usually range from 1% to 2%. In contrast, ETFs, also known as index funds or passive management funds, have only to replicate indexes, which simplifies operations and lowers costs. Commissions range from 0.05% to 0.5%, a fraction of its active rivals.

The pioneer manager in passive management was the American Vanguard (now manages assets for 5.6 billion dollars). The other giants in the ETF sector are the North American BlackRock (under its iShares brand) and State Street. In Europe, the leading manager in this product is the German DWS (with its Xtrackers brand).

“The rise of ETFs is unstoppable, because it is a very convenient type of product for the investor. It allows you to have instant liquidity, instead of having to wait as with conventional investment funds, ”said Bryon Lake, head of international sale of quoted funds at JP Morgan recently.

This bank, the largest United States, has been one of the last to join the race to gain a foothold in the ETF market. He launched his product four years ago, and grows steadily. Also the manager Fidelity, well known for her successes in active management, has entered this segment.

As the sale of this type of products grows, more voices emerge that warn about the problems that it can entail. One of the latter is that of investor Michael Burry (who became a millionaire thanks to his bet against the US real estate market, just before the subprime bubble exploded). In his opinion, some ETFs do not faithfully reflect the evolution of the markets in which they invest and, at a time of market stress, they could have liquidity problems.