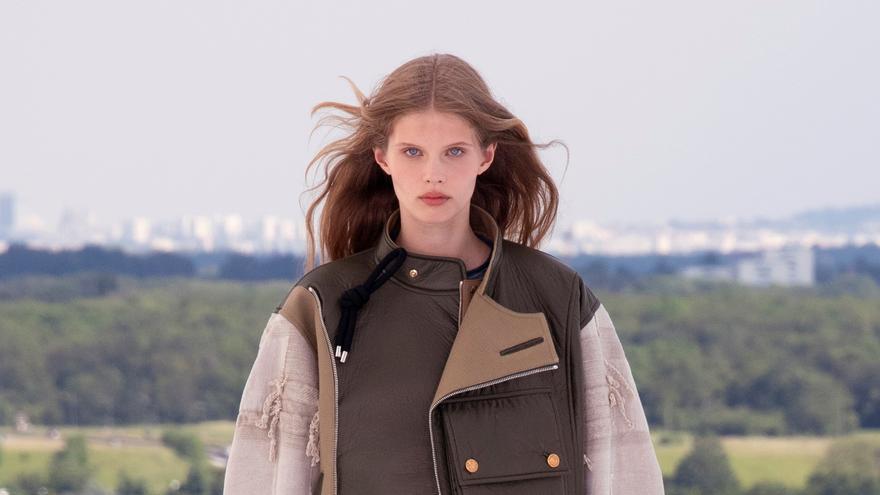 Paris, Jun 15 (EFE) .- Louis Vuitton presented its Cruise 2022 collection on Tuesday, an ode to geometric lines, optimism and color, on the gigantic catwalk of the Israeli sculptor Dani Karavan in Cergy-Pontoise, on the outskirts of Paris.

His styles were imposing and positive, with models that paraded serenely to the rhythm of happy music and amid the harmonious landscape of the so-called “Ax majeur” (main axis), a monumental work that combines landscaping, sculpture, urbanism and architecture, built progressively since 1980.

This Crucero collection, the name given to the mid-season creations presented by the big brands off the official catwalks, was loaded with “cocoon” coats, neoprene minidresses with voluminous ruffles, graphic prints inspired by the 80s and contrasting silhouettes.

Colorful feathers decorate the sleeves and hems of a skirt and add an extravagant touch that contrasts with the updated military jackets with cargo pants and leather boots.

White, black, red and green were the protagonists of a line presented on that immense red walkway overlooking a park and, in the background, the city of Paris.

Ghesquière’s futuristic style was seen in his colorful boots, as if they had just come out of a space exploration, and in that androgynous aesthetic that the French defends in his creations.

For the designer, these outfits represent the harmony between a near world and a distant one, “without borders and open to adventure,” the firm said in a statement.

“You do not need anything but the most beautiful passport: creation. As always, free and unlimited,” he added.

The show, broadcast live on social media, serves as an aperitif for industry fans, who will follow Paris Men’s Fashion Week starting next Tuesday, although the vast majority of presentations, including that of Vuitton , they will still be virtual.

The week of July 5, Haute Couture, on the other hand, will leave more space for face-to-face shows, after a fashion year marked by digital catwalks due to the pandemic.