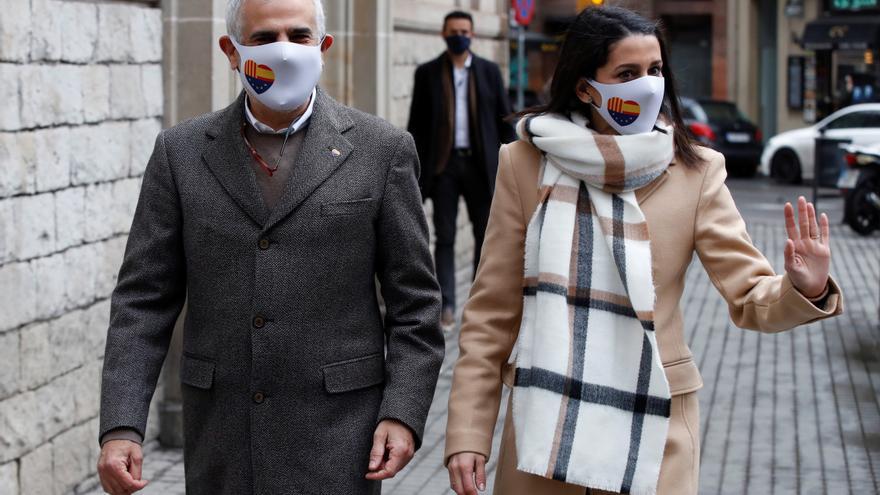 Ciudadanos has suffered an unmitigated disaster in Catalonia very similar to the one that already fit in the general elections of 10N 2019 when the party fell from 57 seats to only 10, which it forced Albert Rivera to resign as president of the party and to abandon politics. The result of the 14F has worsened the bad omens that all the polls predicted for the candidacy of Carlos Carrizosa. Of the 36 seats that Inés Arrimadas won in the previous elections of 2017, Ciudadanos is left with only six -five for Barcelona and one for Tarragona-, going from being the first political force in Parliament to being the seventh, just ahead of the PP, which has been another of the great losers of the night.

The bump has been huge: in 2017 Arrimadas achieved almost one million two hundred thousand votes, which represented 25.35% in percentage of support, which have now disappeared and have gone to PSC and Vox. The low turnout, they lamented, has been a determining factor for these dismal data.

The results are especially harsh in Barcelona where they had 24 seats. Carrizosa's candidacy has managed to maintain only five, among them that of the journalist and talkative Anna Grau, who was signed as number two convinced that it would attract "moderate constitutionalist and Catalanist" voters. The Secretary General, Marina Bravo, and the Secretary of Communication of Catalonia, Nacho Martín Blanco, have also been elected.

In Tarragona, where they had five, only the historic Matías Alonso who led the candidacy has survived. The Girona list, led by Jean Castel, loses the four seats it had, and the same has happened to them in Lleida, where the candidacy of Jordi Soler has not revalidated any of the three deputies that he had achieved in 2017 for this province.

The first assessment in Ciudadanos de la noche was carried out by the Secretary of Communication in Catalonia, Nacho Martin Blanco, -who was number four in Barcelona- was to regret the low participation that has fallen by 22% compared to 2017. " The numbers of participation are not good, the truth is that we did not expect them to fall so much "," It is not good news for democracy, we would have liked otherwise, "he acknowledged in a brief appearance shortly before nine o'clock at night.

At half past ten at night neither Carrizosa nor Arrimadas had yet come out to assess the crash. They did it after eleven at night. After congratulating Salvador Illa "for his victory in percentage of votes but not in seats", they lamented the low turnout that there has been in these 14F elections, "the worst of previous elections and the worst in the entire history of democracy. ”, They have affirmed.

Arrimadas has affirmed that he shares "with thousands of Catalans the sadness that separatism is reinforced". "We have not been able to mobilize the constitutional electorate," he acknowledged.

Both one and the other have highlighted that "almost half of the Catalans have stayed at home" and have described the rise in separatism as "very bad news" which they believe and despite their good results, "do not" represent the majority social of Catalonia "

"We are going to continue doing the same thing that we have always done," they concluded, which is "to defend constitutionalism from the center, from our liberal ideology," while promising that they will also defend it "from totalitarianism."

The sadness for this new debacle has been twofold because Vox, Santiago Abascal's far-right party, has surpassed them by five seats, which represents a whole setback for the leadership of Inés Arrimadas who has turned in these elections "As if she were just another candidate," as announced at the beginning of the campaign. The only data of 'consolation' for the party is that the PP - with which they competed for the same electoral space - that signed the national exporter, Lorena Roldán, has not managed to raise its head. It remains in half the seats of the Carrizosa group, three, one less than before, which could put the formation of a parliamentary group at risk.

The leader of the party, Inés Arrimadas, has made this Sunday an appeal to all the members of the Executive Committee of her party to come tomorrow, Monday, at seven in the afternoon, in person as far as they can to the national headquarters to analyze the results of the autonomous elections in Catalonia. The call was made by the general secretary of the party, Marina Bravo, who has described the meeting as "urgent", despite the fact that it was already scheduled, as usually happens every Monday, the day on which the party leadership meets to prepare the weekly affairs.

Internal criticism of the campaign, led by the party's first deputy secretary and former treasurer, Carlos Cuadrado, has already begun to emerge in the last days of the campaign and after this hit, his position is in danger. However, glances have also been directed against Arrimadas and against Carrizosa himself, who replaced Lorena Roldán in the candidacy by unilateral decision of the party leader and its hard core, which caused a strong internal malaise.

The party focused almost all the acts of the campaign in the big capitals where had to disassemble the electoral posters 'embrace', not having authorization from the company for political or electoral use of those images that everyone in the party did not like because they considered that it was not the most opposing message in the middle of the pandemic. The future of Ciudadanos with this new disaster is getting more and more complicated.