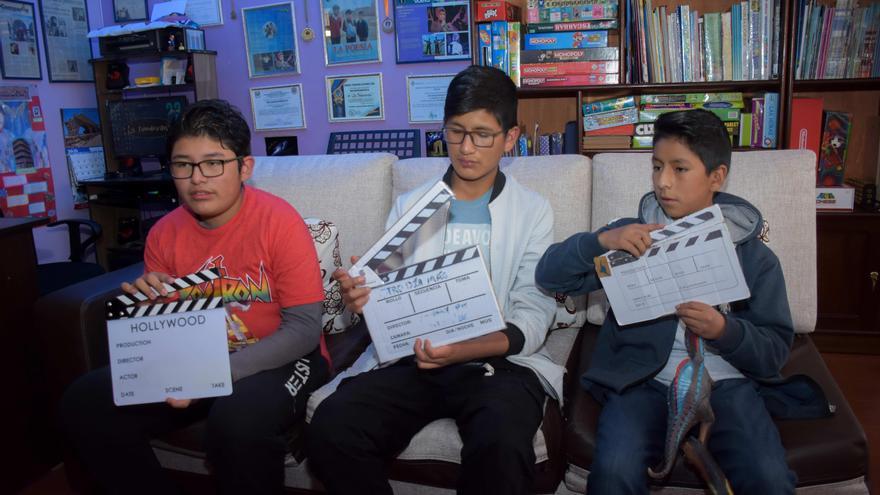 El Alto (Bolivia), Jul 26 (EFE) .- Poetry and reflection on the problems of childhood in Bolivia motivated a group of children known as “los trovadorcitos” to bring to the big screen a message to society with his debut feature “Another Day More”, a film loaded with a lot of innocence but very realistic.

“Los trovadorcitos” got together about four years ago when Jhosney Paca, now 13 years old, discovered a personal inclination towards poetry to which other children joined and thus also opened a space for debate on the problems faced by minors, their fears, their anxieties, but also their dreams like theater and cinema.

“I realized that, sadly, people do not like poetry” and “I decided to make poetry fused with music, dance and dramatized,” Jhosney assured Efe, something that by itself evolved towards the audiovisual as the shorts until take the form of a movie.

“Los trovadorcitos”, made up of seven minors between the ages of 5 and 15 who live in the city of El Alto, and will make their debut this Tuesday at a municipal theater in the city of La Paz.

“Another Day” tells the story of two little brothers, David and Jorge, who live in an environment of violence with a mother who leaves home and a father who is dedicated to alcohol.

Both must find a way to support each other, work selling candy to get ahead, “it’s something real,” Franklin Casas, 15, told Efe, who plays the older brother who to some extent “has to assume the role” that his parents left behind.

“Jorgito is the younger brother, shy, innocent, dreamy, who is always asking why his mother has left,” said 11-year-old Roberth Casas, who plays the role of a younger brother.

Jhosney, who is one of the directors and responsible for the script with Alexandra Calle, 20, said that at the beginning “Another Day More” was part of a series of shorts about stories that concern children in the style of the production Mexican “La rosa de Guadalupe”, but which later spread and ended up, inadvertently, having something apart.

The film of about 80 minutes was recorded with his own resources, with the cell phone of Jhosney’s mother, Irene, who also has a role on stage and Sergio, his father, who in addition to acting had to learn some editing techniques to achieve the final score.

For most of the scenes they used a clapperboard made of cardboard and photocopied paper, one of the objects to which they have a special affection.

Acting work also has nothing but the children’s own experience in poetic declamation practices and private rehearsals that are a kind of raw material to build into something bigger.

In the making of the film, this fusion with the Bolivian popular theater is appreciated, of social intensity, which shows a strong influence on its development and the harmony of naturalness and simplicity of the means used in the technical part.

For the interpretation of their roles, Franklin and Roberth said that they had to rely on what they saw in the news to understand the cases of violence against children and with that and some imagination, “translate into acting” all that.

“When we started it was all difficult,” Roberth said.

Franklin affirmed with certainty that “you have to give everything” and persevere since they have found “everything”, as people who support them, those who want to be like them and even those who insist that poetry or literature are things. outdated.

In Jhosney’s opinion, it is necessary that society “give more importance to children” and that for now they plan to continue sending messages until now such as respect for children, love for animals and care for the environment.

But above all keep dreaming.

Jhosney wants to write scripts about other genres, Franklin believes that we must continue on the same path and Roberth, the youngest, is clear that as an actor he wants to reach Hollywood.