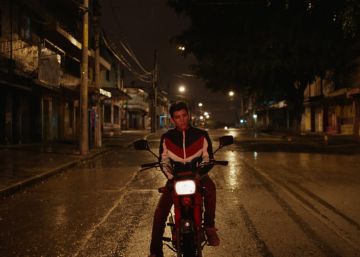 When making movies, Sebastian Lojo (Guatemala, 1989) follows the maxim attributed to the Russian writer Leon Tolstoy that one day his father suggested: “Paint your village and you will paint the world.” He began an obsessive consumption of films when he moved to Europe to train at the London Film School in 2015. He soaked himself in European and Asian cinema and learned to value the great Latin American creators; of the Argentines Lucrecia Martel Y Lisandro Alonso to the Mexican Carlos Reygadas. He also formed with his schoolmates, from different parts of the world, a solid creative union that leads them to work for each other in their different projects. When one of them directs, in this case the Guatemalan, another is in charge of the direction of Photography (the Italian Vincenzo Marranghino) and another of the production (the Lebanese Remi Itani and the Argentine Bernabé Demozzi. The ghosts, his first feature film, took them to his country with the intention of building a perspective portrait about the vital asphyxiation of Guatemala City and the permanent crisis of the nation.

“Living in another place has allowed me to make an analysis of my country without so much anger, finding the spaces of compassion and beauty,” the director tells EL PAÍS, during the film’s world premiere at the Rotterdam Film Festival, finished on February 2. With the personal savings of this film group still without a name and with the help of production support platforms such as Guadalajara Build (Mexico) and Malaga MAFIZ (Spain) his debut was financed.

Lojo recounts the encounter and disagreement of two male personalities that define the rules of survival of the city. During the day, the young Koki (Marvin Navas) is a tourist guide for the clients of the hotel of Carlos (Carlos Morales), a wrestling veteran. In the night bars, he resorts to his appeal to seduce men with whom to occupy one of his partner’s rooms, where he steals their belongings. Despite their fruitful alliance, loyalty is a luxury that cannot be allowed in the midst of the structural violence of the place where they survive. Both are characters that practice the game that their executioner imposes in an environment in which “the pragmatic is imposed on the desires of the soul,” says Lojo about a story that will be screened at the Critics’ Week of the Berlin Film Festival at the end of February month.

As it was a film team made up of visitors and returnees, the script took shape once they lived together for weeks with their protagonists, two non-professional actors who were allowed to record in their day to day to include the real sequences as part of the reality of their characters. “Carlos represents the archetype of the tough man, who knows that traps are the rules of the game. It is a way of seeing how Koki will be in the future if he stays forever in that city and in his deep vital disconnection, ”says Lojo.

Poverty, inequality and poor citizen security in his country that reflects The ghosts are for the filmmaker “structural problems that a change of government cannot solve overnight. In rural areas, eight out of ten people they are in a condition of extreme poverty and 79% of the poor are indigenous, according to their National Institute of Statistics and UNESCO, stood out in 2019 the 3.5 billion blog of EL PAÍS. These figures make up the hostility in which Lojo’s protagonists live; “In the movie, there is intention to condemn his crimes. Their actions are a way of wanting to be seen in a society that doesn’t look at you, except to punish you. ”

Another step towards the miracle

The international recognition you are getting The ghosts It joins that of other recent titles, which are making Guatemalan productions visible in a country without Film Law and with hardly any projection rooms outside the blockbusters from Hollywood. In this almost non-existent industry, co-production is practically the only way of creation.

Our mothers, of his compatriot César Díaz, on the disappeared as a result of the armed conflict in the country between 1960 and 1996, has represented Belgium in the Oscar 2020 race for best international film. And Jayro Bustamante, trained in France, has once again toured half-world film festivals with his new film, The weeping woman, which also evokes that civil war.

“When I started college, the idea of ​​making movies in my country was a clown. Only a privileged part (which can be trained abroad) can make films, ”says the director of The ghosts. His shooting coincided in the country with that of Tremors, the previous Bustamante tape, and with Gunpowder in the heart by Camila Urrutia, which can be seen in March in the prestigious South by Southwest (SXSW). Lojo recalls that the three filmmakers had to make deals with the different production companies because there was not enough technical equipment throughout the country to shoot all three productions at almost the same time. “A movement is being born. Little by little, there are more film schools and public universities than including film studios in their programs. And the Icaro film festival It has become a window to break the hegemony of American cinema outside the capital. It’s about our stories can also be seen in our country. If not, who are we doing all this for? ”He asks.

Feminine stroke in the Chamber