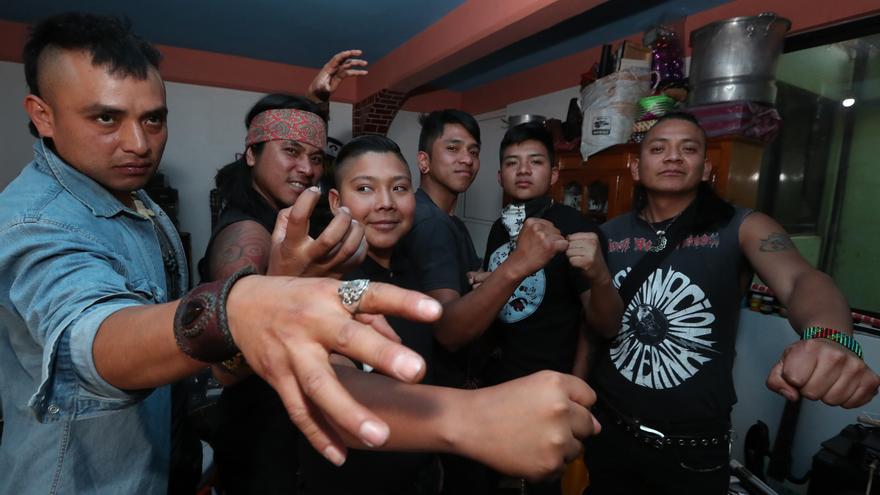 Mexico, Feb 24 (EFE) .- In a room located in the municipality of Nezahualcóyotl, on the outskirts of Mexico City, the Mexican roots are present in a rock ritual presided over by five brothers who found in music and their origins a subversion. They call themselves Los Cogelones.

“The wind is speaking”, says Adrian Sandoval “Chicoace Tocht-Lee”, at the end of the rehearsal for “500 years”, his most recent single and of which they have released a video.

“We started as a punk-rock band that had nothing to do with our Mexica (Aztec) tradition. We have been creating this, it has been an adventure to find the original sound that we have been looking for in the red way (Mexica cosmovision) “, Víctor Hugo” Chicoei Miquiztli “comments in an interview with Efe.

The spirituality in the environment, which is created with its songs and the sound of its pre-Hispanic instruments, is mixed with the essence of a rock group that in turn is crossed by the discipline that emanates from the drum and cornet of the band of war.

“One day an aunt gave Marco an acoustic guitar and that was our closest approach to rock, but we had already been in the war band,” recalls Víctor, vocalist of the group.

His story is written in the same place where his grandparents’ was written when they came from the countryside to Nezahualcóyotl, in the metropolitan area of ​​Mexico City, in search of better opportunities, because “ironically there was no food in the countryside.” Marco says indignantly.

It was they who naturally taught them the customs that they defend today in each piece.

“The awakening was unconscious. When we went to town our grandparents and uncles spoke to us in Nahuatl and told us stories. There our knowledge began to be injected, you are already born with a gene, it wakes up,” says Víctor.

Los Cogelones speak in their music of respect for their origins, nature and they criticize society, but they do not try to teach anyone.

“Ours is a need to be able to get out of this prison in which we have seen ourselves for many years. Our history is forged by pain. Our family had to go through hard things to get ahead and many people from our town are going through for something like this, we are the voice of the people, “says Victor.

“Rock stopped being rebellious, stopped being angry and criticizing. People are no longer angry, they are in love. As my carnal (brother) says, they have prostituted love but nobody practices it,” says Marco, the drummer.

The spontaneity of Victor gave the name of the band, which refers to sex. This has generated rejection in some spaces and has even created conflicts with the police, but they assure that it means more than many believe.

“All human beings are ‘cogelones’, we can continue generating life. It is time to stop prostituting love and the body. We believe that sex is something that they gave us to enjoy life. At the end of the day we believe that it means unity and creation “, points out Víctor.

Despite the adversities the world is going through, Los Cogelones assure that the Mexica worldview shows a path of light and progress.

This has been the case for them: after having struggled as independent artists for years, 2020 opened the doors to success by allying with the Piccolo Records label, who have boosted their talent.

His most recent album “Hijos del sol” (2020), produced by Pablo Valero (Santa Sabina) and Enrique Tena, is part of this ascent.

From this production the theme “500 years” emerges, of which they recently released a video and in which they narrate the slogan that Commander Cuauhtémoc left the Mexica people after delivering Tenochtitlán (territory that today Mexico City occupies) to the Spanish conqueror Hernan Cortes.

“This is our feeling regarding that fact, without resentment or hatred because at the end of the day we are the results of that (the conquest),” says Marco.

With the video the brothers invite their followers to bond, care for the other and the planet.

“Let’s go out to build, to twin. It is no longer a question of brown, white, yellow. If we do not do something now, humanity is destined to destroy itself,” says Marco.