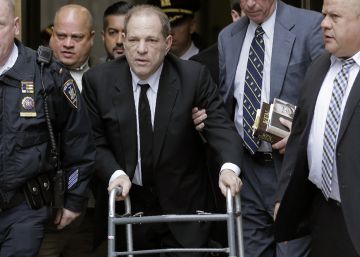 The Los Angeles District Prosecutor’s Office filed four formal charges against the film producer on Monday Harvey weinstein for two sexual assaults allegedly committed in 2013. This is the second jurisdiction that takes this step, more than two years after dozens of women publicly accused Weinstein of sexual crimes ranging from harassment to rape. The announcement comes the same day that Weinstein appear in a New York court in a trial for two other sexual assaults.

So far, the five charges filed by the New York prosecutor’s office were the only ones that had been substantiated after the wave of accusations against Weinstein, whose behavior spans decades. The trial in Manhattan began on Monday in the middle of a huge expectation to see Weinstein on the bench for the first time. It is expected to last about two months. The accusations in Los Angeles, however, seal the medium-term future of the producer. Even if he is acquitted in New York, he must appear in Los Angeles to be prosecuted again. On Monday it was not clear if the new process interferes with the trial in New York. The prosecution has set a bond of five million dollars.

The denounced facts They refer to two meetings with women on February 18 and 19, 2013. The two attacks occurred on consecutive days and in hotel rooms in the Los Angeles area. According to the district attorney, Jackey Lacey, the two alleged victims told other people at the time. After the scandal over Weinstein’s abuses erupted in October 2017, the two cases were presented to the prosecution. Most accusations against Weinstein have prescribed. In total, eight cases have been investigated for an angle to prosecute Weinstein. Three others could still lead to charges.

The charges for these facts are rape by force, oral sex by force, penetration by force and retention by force. If convicted, he faces 28 years in prison. In New York, during the preliminary phase of the process, the accusation was also charged with “predatory behavior”, an aggravating factor that is applied when a deliberate and continuous way of acting is demonstrated. If convicted of this aggravating factor, Weinstein faces life imprisonment in New York.

Harvey Weinstein, one of the most successful producers in the history of Hollywood, “used his power and influence to approach these women and then committed violent crimes against them,” Lacey told a news conference in Los Angeles. “I want to applaud these victims who have taken a step forward and have had the courage to tell what happened to them.”

None of the women have been named in the positions. Los Angeles Times He says that one of them is an Italian model who told his story in a very graphic way to the police in 2017 and also to the newspaper. The other woman is one of six who will testify in New York and whose testimony she wants to use the accusation to demonstrate Weinstein’s pattern of behavior.