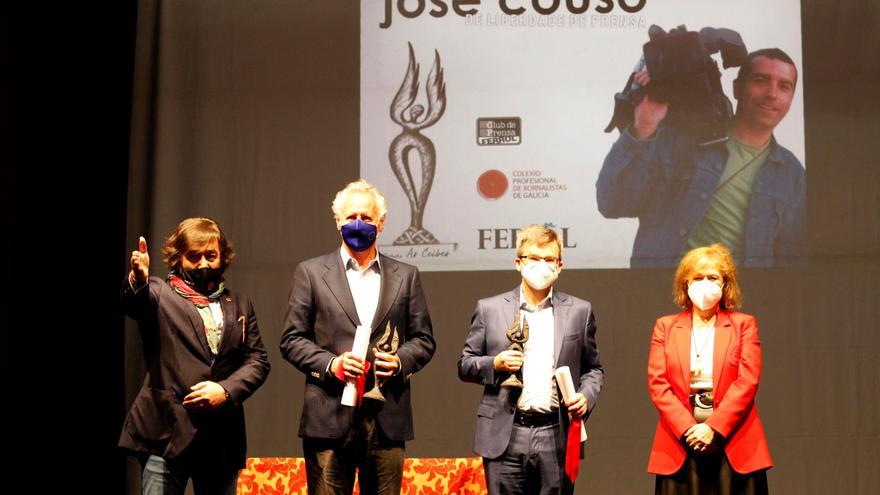 Ferrol, May 15 (EFE) .- The outbreak of the pandemic prevented Lorenzo Milá, TVE correspondent in Rome at the time, from collecting the José Couso Prize for Press Freedom in 2020, an award that in 2021 goes to Manuel Rico, director research of infoLibre. The two have coincided this Saturday to receive the awards in Ferrol.

Being able to deliver their awards to both has served so that Ferrol has become this Saturday the forum about the headaches and hopes of journalism. They have been exhibited at a meeting organized by the City Council.

The day, dominated by incessant rain, began in the Canton of Molíns, where each year a sculpture welcomes an offering in homage to free information and to those who lost their lives in its defense. This is the case of Ferrol Couso, a Telecinco camera operator who was killed by US gunfire while following the Iraqi war.

The old Charity Hospital would later host a reception, a gathering with the protagonists and the delivery of the awards itself.

The Colexio Profesional de Xornalistas de Galicia and the Club de Prensa de Ferrol promote this award, in which Milá has railed against the “much noise” that plagues journalism and has recalled that much “part of the noise is not true”. And sometimes “intentionally wrong to generate behaviors that interest a certain political option,” he said.

For this reason, he has urged to wield “the responsibility of pointing out what is not responsible journalism.”

In the conversation, his viral chronicle of 2020 has come to light, when in Spain the state of alarm was not yet in force, and he has considered that he was “accused of supporting the Spanish Government in a strategy of minimization” of the covid-19.

He asks that if “you do not know what you are talking about, do not pretend to know” and that if “you intend to do politics, go to a party or a private media that defends a specific option”. It is clear to him, “in the public you have no gap, you are required a plus of independence.”

In general terms, he has alluded to the need for “a reasonable balance between interests and truth” to avoid “the rude defense of interests”.

And it has warned of the situation of women over the years, an almost explosive combination in the audiovisual: “There are presenters who believe that as soon as the gray hair is left they will lose their job.”

It exhorts to leave the “comfort zone” and listen to “an uncomfortable medium” in the era of “informative speed, that is detrimental to contrast.”

When asked if “the pressure of power in RTVE” is still in force, he replies that “almost no” because “it no longer has the strength it had.” For the correspondent, it is clear that “the news cannot be used in such a rude way as in previous decades.”

He has quoted a “Zapatero who was clear that he wanted to be consistent with his proposal to move away from public television; he promoted the creation of laSexta, he believed that society had to have a medium with an orientation in accordance with his own.”

And the then Prime Minister, he pointed out, “let us work”; years later, he indicates, “the newscasts work with a high degree of independence.”

For his part, Rico, with journalistic experience in Galicia, has pointed to the noise of social networks, where the personal account must be like “my house” and if “I invite you, the only thing you cannot do is throw cigarette butts”.

Faced with pressure, the maxim that each table has a trench: “We cannot accept that the definition of journalism is stolen from us.”

“In an ideal world everyone would act honestly, we have to stand firm,” snapped the informant.

From infoLibre, he points out that they are “a small medium” and that other “larger media colleagues have a much stronger pressure.”

In his, they suffer “an interesting pressure, that of the partners”, which is on the rise because “it is possible to establish a dialogue, the digital media are going to notice it more and more”.