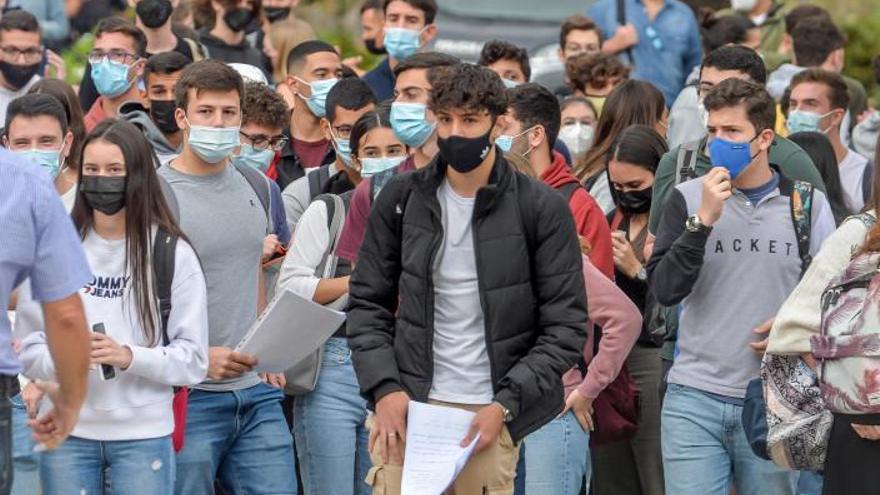 Although until yesterday there was no notification, in the event that a student cannot attend the exams this week for reasons related to Covid-19, they must notify it with a medical receipt before June 21. In these cases, and after the agreement reached by the two Canarian universities, those affected may be examined in the extraordinary call in July, although for academic purposes their qualification will count as if they had been examined in June so that they do not lose the options to place in the careers with the greatest demand, according to the vice-rector for Students, Alumni and Employability of the ULPGC, David Sánchez. «Until today we have not had any official notification, but we have opened the period until June 21 to present the medical notification, since it may be the case that a student has symptoms and does not come to the exam, but does not have the part doctor until next week, "he stressed.

Despite being the second EBAU to be held under the pandemic protocols, this year there is greater tranquility on the part of the students who attended the tests yesterday in the Architecture building, on the Tafira Campus of the ULPGC. Most of the young people consulted assure that they have already internalized the health protocols after assuming them throughout the course in their respective educational centers.

«With so many exams and the nerves to get grades, the least that has mattered has been the pandemic. It is true that at the beginning of the course it was difficult to be in class with the mask, but at this point it is already a part of us, as if it were the ear ». This was stated yesterday by Raúl López, a student of the IES Guanarteme, who is playing a place in the degree of Medicine in this selectivity. He admits that it has been difficult for him to fight for the grade, "in fact I don't think it will come first," because it starts with an average high school grade of 8.33. "I am also very clear about what I am going to do, if I do not get the grade for Medicine, I will have to do a year in Nursing and validate subjects, but if it is not this year, it will be the next.

His high school classmate, Jorge Rodríguez, has it easier with his 8.44 grade point average, given that he opts for Architecture. "I don't need a grade, just pass, that's why I'm calm." For him, the most intense has been the preparation for the EBAU throughout the academic year, "but now I am calm, with the feeling of having my homework done." And regarding the pandemic, he assures that there is no fear of contagion, "we have already become accustomed to the mask, the gel and the distance."

The case of these two students defines very well the different degrees of nervousness that was breathed yesterday in the Tafira Campus among the students of the science modality, divided fundamentally between those who aspire to enter a degree in Health Sciences and those who who opt for engineering or architecture.

Jorge Hoyos, from IES Pérez Galdós, assures that "I have not been overwhelmed a lot" because he wants to study engineering and he only needs a five, "but even so I am quite prepared and I think it will be good for me." He also has no feeling that it was a different course from the pandemic. "For me it has been the same, we know what to do and that's it."

On the contrary, Alicia García, was a nervous wreck, "because I am playing Physiotherapy, which is what I have always wanted, and I am about to achieve it."

Kendra Ortega, a student at IES La Isleta, also wants to do an engineering degree in Industrial Design, therefore she does not need a grade, "I'm fine with five but I'm not satisfied," says the young woman who earned a 9.22 average in high school. . For her, this last year of high school has been hard. «There have been both moments of downturns and moments of joy, but we are already here, at the EBAU and with the right nerves, after all it is what we have practiced throughout the course. What we have worked on all this year has been the result of what we will see today ».

For teachers, this course has also been more bearable than in the past, when the pandemic broke out. «This year has been much better than the previous one, the students have been very motivated because we have been to the center in person. We have done quite a few drills and the boys have also put in a lot on their part since they have gone through two years of high school with many challenges ahead, "said Marienca Lorenzo, a teacher at Colegio Arenas Atlántico. It recognizes that the students who are clearer about their choice of career are those who opt for the branch of Health or technology. "It is also true that there are those who opt for a higher cycle training center, especially since this year many students do not want to go away because of the pandemic."

After the Spanish Language and Literature exam, of which the great majority came out very satisfied, the Foreign Language exam began at 11.30, and at 3.30 pm they had the History of Spain. Three subjects that will be repeated today with the literature students. While on Friday the 11th and Saturday the 12th it will be the turn of the exams that correspond to optional subjects, so not all the students will coincide at the same time in the same space. In total, 10,737 students have enrolled in the Canary Islands to take the EBAU, 5,945 in the ULPGC -5,267 for the general phase and 678 only in the specific one to improve their grade-; and 4,792 in La Laguna -637 will be eligible for the specific one-.

As highlighted yesterday by the Director of Access of the ULPGC, Nicanor Guerra, the exams passed without any incidence in all the authorized venues, and the forecasts point to a majority attendance of all those enrolled. «In the general phase of the EBAU the attendance rate is usually almost 98 or 99%. Where if there may be a fall, it is in the specific one, because there are students who may enroll in three electives and then take only one, two or none, but the general one, with very few exceptions, is strictly adhered to » .

The rector of the ULPGC, Lluís Serra, visited yesterday, together with the vice-rector for Students, David Sánchez, several of the EBAU headquarters located on the Tafira Campus and in Expomeloneras, in the south of the island, where 987 students are examined , thanks to the collaboration of Lopesan and the San Bartolomé City Council. Serra addressed the students a few words of encouragement to face these exams, and of gratitude to the teachers participating in the tests. | LP / DLP