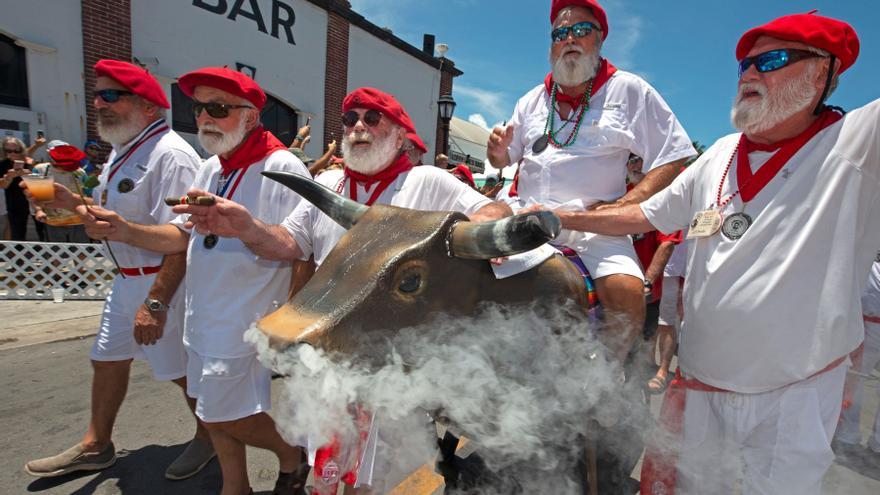 Miami, Jul 24 (EFE) .- The participants in the popular contest to choose the man most similar to the American novelist Ernest Hemingway (1899-1961) turned the Florida Keys into a small San Fermin this Saturday.

Fully covered with Spanish flags and full of bulls, the historic and touristic city of Key West revived in its own way the famous annual bull race held in Pamplona (Spain).

The event took place on the outskirts of Sloppy Joe’s, a bar located on one of the streets in the historic center of Key West, the favorite place of the famous author and winner of the Nobel Prize in Literature when he lived in the city.

Slower and safer than the Pamplona challenge, the Key West race featured the novelist’s imitators fully dressed in white with berets and red belts – typical of the original party – and wandering around the island’s historic center with a ” herd “of wooden bulls mounted on wheeled boards.

The 40th edition of the Ernest Hemingway Impersonators Contest opened on Thursday night and will select the winner from 25 finalists chosen from the initial 137 entrants today.

The contest, which dates back to 1981 and rewards those who most closely resemble or best copy the style of the author of works such as “The Old Man and the Sea” and “Party” among participants from all over the world, had to be canceled in 2020 due to the pandemic.

The contest is one of the highlights of the summer in the Florida Keys and is part of the “days” that the city dedicates to the writer to coincide with his anniversary, which falls on July 21.

Nicknamed “Papa”, Hemingway spent long periods of time in the city, especially winters, from the late 1920s to the late 1930s.

Hemingway wrote some of his most enduring classics while living in Key West, including “For Whom the Bell Tolls” (set in the Spanish Civil War) and “To have and not to have.”

Winner of the Nobel Prize for Literature, his home in Key West is now a museum.