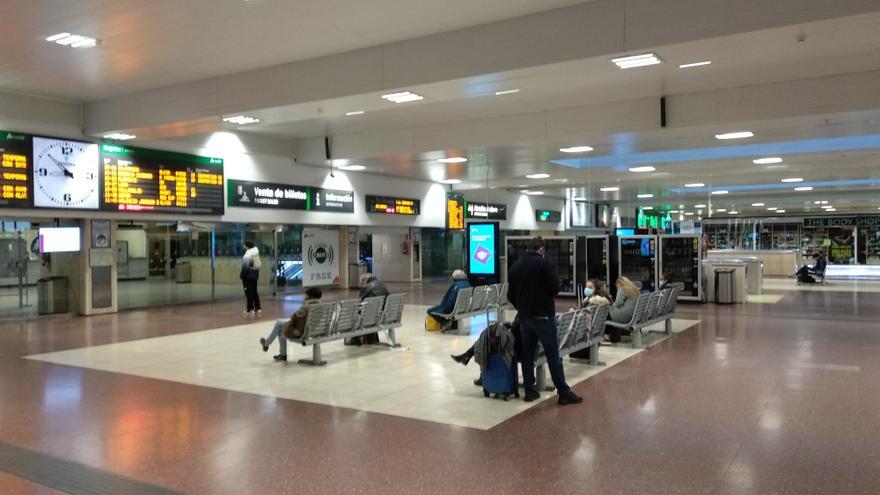 The perimeter closure of Madrid imposed by the increase in coronavirus cases was going to be “chaos”, according to the president of the Community, Isabel Díaz Ayuso. But perhaps due to public prudence, perhaps because it is the weekend, the main train and bus stations in the city were this morning a haven of peace, with few travelers and police officers making the rounds at a leisurely pace, almost carelessly. Although some traveler consulted admits that they are leaving to avoid closure, most have justified reasons and none have encountered complications to leave the capital.

“I’m running away from Madrid, basically,” admits Alicia, a teacher who is coming home from the Atocha train station to spend the next few weeks with her family, “to see if things improve.” Elisabeth, who checks the tickets before the security control, explains that yesterday there was more movement, but that today “very few people are seen.” A security guard thinks the same: “Look in the hall, this is dead,” he says. Two agents of the National Police who passed by confirm that “at the moment” nothing is controlled and that everything is “very stopped.”

Carles and Teresa also arrive in Atocha, who return to Alicante on the weekend after more than a month doing PCR tests in a laboratory in Madrid, where they work as technicians. For them, who have a mobility certificate that allows them to enter and leave the city without problems, this visit is the last in a good season. “We wanted to say goodbye to the family for good,” she jokes, expecting the workload to increase and the restrictions to increase. She advances the hopeful data that the positives detected in her center remain at the same percentages in recent weeks, despite the fact that the number of tests has increased greatly. A few meters away, looking at the information panels, is Robert, an American living in Jerez, just back from America. “You have to do a lot more paperwork,” he says of his trip. But neither at the airport nor at the station has he suffered any setbacks.

At the Méndez Álvaro bus station, the busiest in Madrid, the picture is similar. “Look at the station, if it is empty,” says the worker at the information point, pointing out that Saturday is a day when there is usually less traffic. Several international lines depart from Méndez Álvaro, such as the one that had brought Raúl and Jonathan from Cádiz back from France, construction workers who were not aware of the perimeter closure of Madrid. “If they tell us something, I’ll put a bomb,” Raúl throws himself while still noticing the sandwich. “We did not pass any controls, not even at the border,” says Jonathan.

The Cádiz couple did have to undergo a PCR before going north to the construction site, as did José, who arrived from Guatemala for the olive harvest season in Seville and passes through Méndez Álvaro on the way to the airport to return. Not so Socorro, who lives half the year in Valencia and the other in Ourense. Sitting next to two large suitcases and a cage with a canary (“He’s a small relative we have, we haven’t put a mask on him,” she laughs), Socorro explains that she couldn’t cancel the trip. “If not, I would not come,” she says, convinced that the ideal would be for everyone to stay at home and do “a little bit of their part.”

The other major train station in the city, Chamartín, has also placidly started the first day of the official ban. “This is very quiet,” confirm three police officers walking down the half-empty main corridor. Israel and Bianca, theology students, were provided yesterday with a document to justify the trip to Villarrobledo. Raquel, for her part, goes to Guadalajara. “My father has ALS (amyotrophic lateral sclerosis, a serious disease of the nervous system) and we don’t have someone to take care of him.” For Caridad, a Vallecas nursing assistant who works at the Infanta Sofía Hospital in Alcobendas, the closure of Madrid has, however, given her greater freedom to move around her neighborhood, since the Community of Madrid eliminated the partial restriction measures in the southern neighborhoods.

The beginning of the week and the greater flow of trips that it brings will determine if the situation reaches the chaotic degree announced by Ayuso. It is also necessary to know if the judges decide to suspend the closure in a precautionary manner, as requested by the Community of Madrid. This uncertainty contributes to the feeling of provisionality among travelers this Saturday. Teresa and Carles, the laboratory technicians waiting in Atocha, feel this way: “In two days everything can change.”

Three autonomous communities demand that the Government impose a curfew