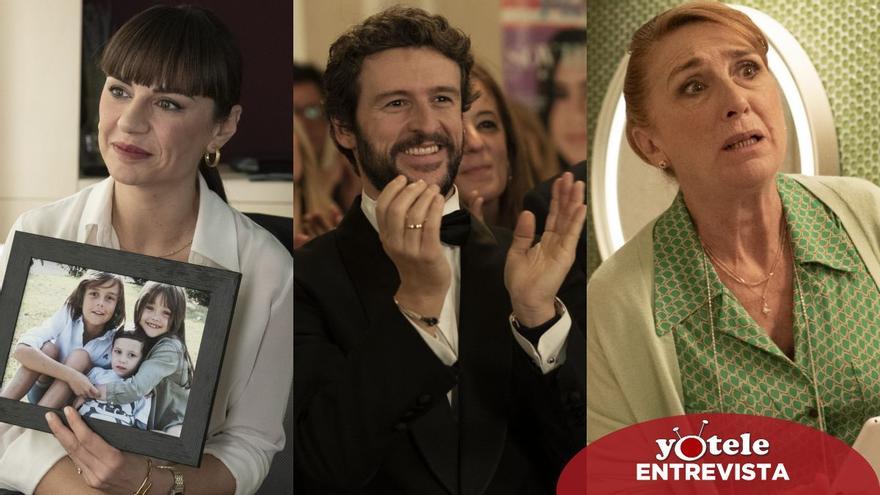 Movistar+ bet on comedy again with the premiere of ‘Supernormal’, the new series starring Look at Ibarguren, Diego Martín and Gracia Olayo, which arrives on the platform this Friday. Created and written by Olatz Arroyo (‘Down there’, ‘The best summer of my life’) and Marta Sánchez (‘Aída’, ‘Down there’) and directed by Emilio Martínez-Lázaro (‘Eight Basque surnames’), the Fiction makes visible in a humorous way the problems that working women have to reach conciliation.

The Serie tells the life of Patricia Picón, the head of the fixed income department at an investment bank. Facing the gallery, she is efficient and decisive, but deep down Patricia is also vulnerable, proving that you cannot be perfect in everything and also be happy. YOTELE talks to the actors about this first season of ‘Supernormal’ on Movistar +.

What are we going to see from this Friday in ‘Supernormal’?

Look at Ibarguren: You are going to see a series focused on a woman who works in an investment bank. The audience is going to laugh a lot because the characters are wonderful.

Diego Martín: ‘Supernormal’ is a comedy in which many will be reflected in many things in our lives. It is a series with great actors.

Gracia Olayo: People are going to enter worlds where normally we average Spaniards do not have access, such as investment banks. They are universes in which you have to do a lot to excel and succeed, especially as a woman.

‘Supernormal’ is created and written by Olatz Arroyo and Marta Sánchez and directed by Emilio Martínez-Lázaro, three great humor professionals with important hits such as ‘Aída’ and ‘Eight Basque surnames’, among others. Did this circumstance help you to accept this project?

Miren Ibarguren: Yes. Olatz and Marta are great screenwriters. The script was very funny from the start. The characters were super in tune and very chewed on details. They made you really want to interpret them because they gave you everything done.

Diego Martín: That there is talent in front of and behind the cameras always helps to make decisions.

Gracia Olayo: In addition, the topic was very attractive because a series had never been done on a working woman in a field of men and money such as private and investment banking.

Tell us a bit about your characters. Do you feel identified in something with them?

Miren Ibarguren: I have little in common with Patricia Picón. Maybe something about perfectionism, but all of his circumstances are different from mine. She is very ambitious and very dedicated to the cause. It is a hurricane that can handle the entire environment, but sometimes, if not all the time, it fails. He is quite unhappy.

Diego Martín: I don’t really know how to define Alfonso. Nor am I very much at doing it because I think that the works should speak a little for you, but, to give a couple of brushstrokes like this, he is someone who is very easy to please, although he also puts his shoulder a lot closer. Despite the friction, he is very much in love with Patricia.

Gracia Olayo: Marisol is a secretary who has been working for more years than the carpet that the bank has. He has seen passing by there, in this case, more bosses than bosses. She is a woman with a very maternal and village psychological profile who is not impressed by the rich who pass by. He has a very close and protective relationship with Patricia. Almost from mother and daughter. She is an aunt who has very good feet.

Do the worlds of family and Patricia’s work get mixed up in the plots?

Look at Ibarguren: They are different, although they are united by the character of Patricia Picón. It is as if we could see the different worlds that a person has to understand them better. It is very rich to see how different a person is on one side and on the other.

The first season of ‘Supernormal’ is 6 episodes of 25 minutes. The three of you have done much longer series in our country. How do you value working on a project with shorter times?

Miren Ibarguren: I liked it. It is very practical and different. It came from 90 minute episodes in which it takes like two weeks to record one, but here, in two months we had the season done.

Gracia Olayo: And it is appreciated, because doing comedy and making it long is not easy at all. Now, in 25 minute chapters, it is much easier to count, not boring, and to be funny. For me it is a great advantage, although it is less risky. In humor, less is more. At least for me, as a viewer, I’d rather have her focus on 30 minutes than drag out or fade and lose all her strength.

Diego Martín: When you are filming you are not aware of changing the interpretation depending on whether it is 30 or 50 minutes long. I think it is something that is more noticeable as a spectator at the level of rhythm, montage, the feeling that leaves you light …