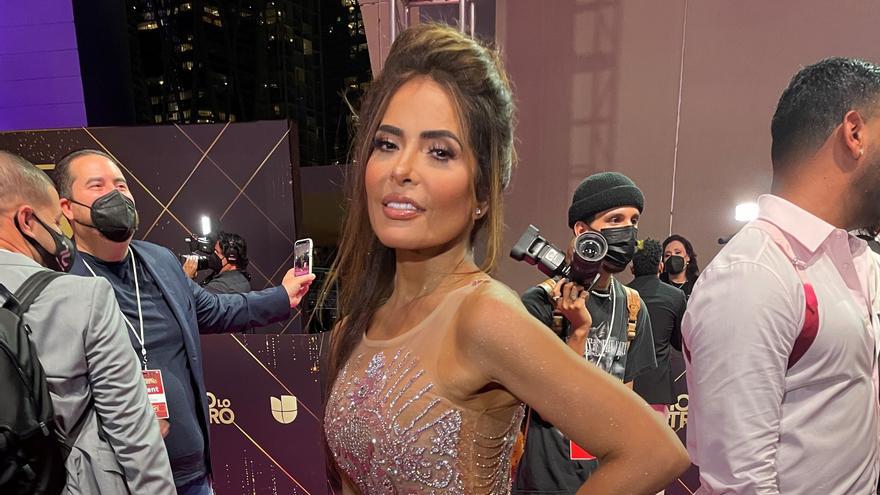 Miami (USA), Feb 18 (EFE) .- Famous Latinos such as Alejandra Guzmán, Gloria Trevi, Carlos Rivera, Wisin and many more took out their best clothes to parade on the magenta carpet of Premios Lo Nuestro, which are delivered this Thursday in Miami (USA.).

After arriving in brand-new limousines at the American Airlines Arena, where the event is taking place, the celebrities starred in a kind of fashion show, where jewel tones and black stood out in the first ceremony of 2021 regarding the delivery of awards from the world of Latin entertainment.

One of the most striking was Chiquis, who wore a royal blue mermaid-cut velvet suit, in homage to the Mexican group Los Ángeles Azules, which tonight received the Musical Legacy Award.

Guzmán took advantage of the occasion to release an elegant black dress from Gucci, “which had been in the closet for many years,” he told Efe.

Also in black with white ruffles appeared Chiquinquirá Delgado, one of the presenters of the awards gala.

The men also made an effort. Among the most elegant stood out the soap opera actor Gabriel Soto, the singer-songwriter Carlos Rivera and the salsa singer Víctor Manuelle, all in elegant formal suits.

The reggaeton players confessed to having given themselves to their stylists. Thus, Wisin wore a purple plaid suit, Zion and Lennox were complemented by a fuchsia color in their outfits, and Lenny Tavares and Justin Aquiles chose to wear leather and cloth.

Among the great absentees on the magenta carpet, the first organized by Univision since the beginning of the pandemic, stood out J Balvin, the artist who dominates the nominations for these awards, with 14 nominations.

If the Colombian reggaeton was on vacation, his compatriot Maluma, who follows him with 12 nominations, preferred to enter the Arena directly, as he was in charge, with the Mexican Carlos Rivera, of opening the show.

The third most nominated, Camilo, paraded dressed in a kind of Japanese kimono and military boots, but he did it without his wife, Eva Luna Montaner.

Others who avoided the carpet to protect themselves from the covid-19 were Luis Fonsi and Natti Natasha, who were in the enclosure, but entered without being seen by the press.

The winners of the 2021 edition of Premio Lo Nuestro were chosen by popular vote on the award’s website, organized by the Univision network, which this year expanded the categories to 35, for which almost 147 artists compete.