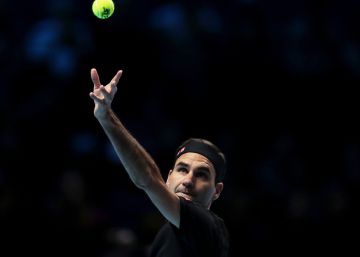 Even without being fine, but rather out of tune, Roger Federer It's a lot Federer. The Swiss had before him an all-or-nothing crossing against the Italian Matteo Berrettini, because of having slipped on the first day, and resolved it with more efficiency than brightness. He is not inspired by this final stretch of the season, but nothing that works for him and offers a handful of flashes already has the English stand in his pocket, because Basel is the great seducer of the racket. He fulfilled this Tuesday (7-6 and 6-3, in 1h 18m) and therefore retains credit in the tournament, although on the last day he will face an appetizing clash with Novak Djokovic, who tonight (21.00, #Vamos) is measure Dominic Thiem for the pass to the semifinals.

Federer's historical weight fell like a dolmen on Berrettini, virtually eliminated. The first day, the Italian (23 years old) could barely tickle Nole, but this time his performance was more dignified. It held until the end of the first set and in the second gave only when the Swiss had already taken cruising speed. He now has the incentive to achieve the victory of the honrilla and a goal not insignificant: to be the first tennis player in his country to obtain a triumph as a teacher. Neither Adriano Panatta did it – he lost the three duels of 1975 against Arthur Ashe, Ilie Nastase and Manuel Orantes – nor Corrado Barazzutti – the same before Eddie Dibbs, Brian Gottfried and Raúl Ramírez.

Meanwhile, Federer (38 years old) remains standing. I had never lost RF the first two crosses in a Masters and escaped the trouble with reliability and without trembling. Only once, 2008, was eliminated in the group stage of the tournament. He did not need to offer a recital, but simply shoot the service –78% with first and 68% with seconds– and especially the ability to leave the small knot that formed in the first sleeve. If Berrettini had won it, the story would surely have been very different, but Federer came out gracefully and now the pass will be played with Djokovic. The Serbian, in conflict with Rafael Nadal for number one, could face the clash already classified.