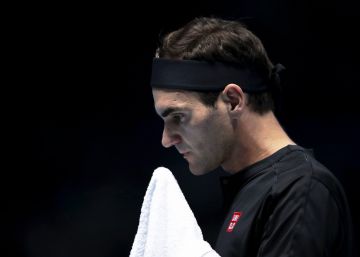 There is no tennis player now, not even Rafael Nadal, his historical black beast, that generates more rashes to Roger Federer that Dominic Thiem. The Austrian inclined to the champion of 20 greats in the first day of the Masters (double 7-5, in 1h 40m) and certified the superiority of the last times against the Swiss, beaten in five of the seven confrontations between both. Thiem has defeated him in all fields: hard, grass, earth. And there is not, since 2016, a rival who has knocked him down so many times, the latter after a pulse in which the Basel was again decaffeinated. Federer is, then, again before an abyss: on Tuesday he only has to win, or else he will say goodbye to the tournament.

At the first change, because that is how the Masters system works, it has no margin for error. He will have to beat Matteo Berrettini and amend himself to continue, because if he does not close the season abruptly – he will not play the Davis Cup in Madrid – and especially with bad taste. With the exception of the parenthesis in Basel, the Swiss is not found since Novak Djokovic the last edition of Wimbledon was taken from his hands. Since then, Federer has lost color – second round in Cincinnati, quarters in New York and Shanghai … – and has been weakened after a notable first half of the year.

Thiem struck on his backhand with one hand and decanted an even duel, decided on two pivot points where Austrian walked finer. To Federer the gesture was twisted and the record holder of the Masters Cup, with six trophies, yielded. In this way, it is now his turn to paddle upstream. Meanwhile, Djokovic and Thiem will play a direct place for the semifinals in the night session.

Put underlining his candidacy, being as he is the champion of the tournament, Novak Djokovic put the first foot in the Masters with a resounding victory against the young Matteo Berrettini: 6-2 and 6-1, in just 62 minutes. The Serbian wanted to intimidate and at the premiere he gave a good account of the Italian, thus sending a message: in London, Nole goes with everything. There is the fight with Rafael Nadal to close the course at the top of the circuit, nothing trivial matter for him, eager to regain control and finish at the top for the sixth time in his career; and match, incidentally, Federer's record in the event that closes the year.

Six trophies have the Swiss, and that fabulous figure pursues Djokovic. The debutante Berrettini was aired in a plas plis, to add 200 juicy points and press Nadal from the start. Remember: the Balearic would be enough to reach the final having won the previous four games – the three of the group stage and the semifinal -, or directly raise the victory next Sunday to maintain the current status. Manda the Mallorcan and Achucha Nole, who enjoyed a placid and energizing opening; Excellent way to start, solid and with its classic business card: eight errors.

He unbalanced the first quarter to the sixth game and in the second he did not allow the 23-year-old Roman to breathe until he drew an insurmountable 4-0. At that point a relaxation game was awarded, but then the turbo was replaced and the first victory was awarded. Djokovic wants to London, where he linked four of his five conquests from 2012 to 2015; that is to say, they are three years of emptiness and the past in addition to stinging, because Alexander Zverev, rival of Nadal this Monday (21.00, #Vamos), snatched the triumph against all odds.

In any case, Djokovic (32 years old) competes this time on the back of the good dynamics that he brings from Paris-Bercy and Tokyo, with a single autumn slip in Shanghai. He is strong and dominates the scene: under cover and over fast, his record of effectiveness amounts to 78.8%. In the Masters, in addition, accumulates 36 victories, then equals with the German Boris Becker in the third historical place, behind only Federer (57) and Ivan Lendl (39).

"The fight cannot be conceived without an audience in the terraces"