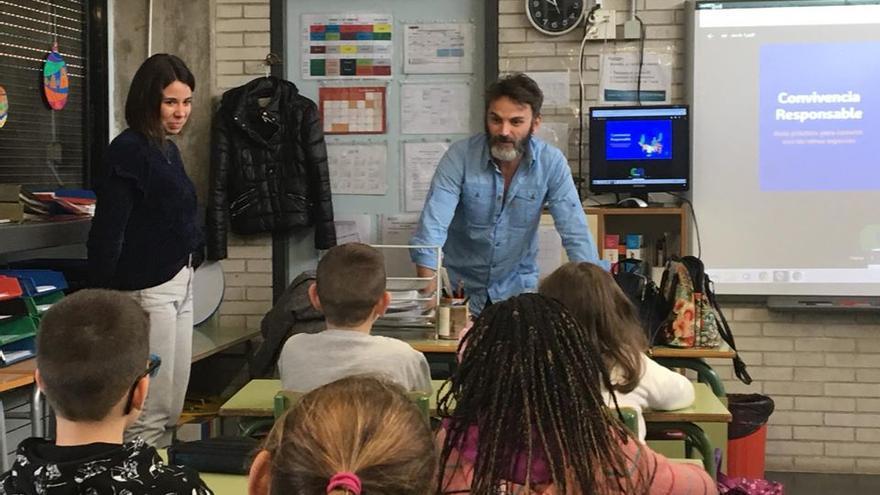 In December 2018, most of the Parliamentary Groups of the Congress of Deputies jointly presented a non-law proposal promoted by APDDA and PRODA (Professionals for Animal Defense). It called for the incorporation of empathy towards animals in the school curriculum. The early dissolution of the Cortes prevented its debate and approval. Now, with the new Education Law, the LOMLOE, being processed, animals have had a new opportunity. And justice has begun to be a reality.

The achievement of the APDDA has consisted in knowing how to explain to political representatives that including empathy towards animals at different educational levels (Infant, Primary and ESO) is to take care of the comprehensive education of our minors. Several groups have collected our proposals and they have already been approved. The time has come to introduce training in empathy towards animals into our educational system as a way to prevent, avoid and intervene in violent behaviors, as well as to generate prosocial attitudes that promote a healthy, peaceful and responsible coexistence.

Because, let’s take some time to reflect. Do we know how to put ourselves in the place of another sentient being? Do we understand their joy, their sadness, their fear? Can we get to feel their emotions? Do we want to help you achieve your balance and well-being? Would it redound to your own? Do we know how to resolve conflicts peacefully?

If a large part of humanity were able to have positive answers to these questions in their internal dialogue, there would be no wars or abuses, because they would be rejected individually and we could live in peace with the rest of sentient beings. Many problems of humanity would be solved by developing empathy: we would have marked the path for personal and social evolution towards a more habitable world for people and animals. Empathic ability is the main basis of interpersonal communication and the indisputable foundation of altruism, which is incompatible with aggression towards the other.

Both cognitive empathy (the decision to put oneself in the place of the other) and affective empathy (effortless emotional perception) are the bases that lead us, through compassion and solidarity, to prosocial behavior, the great educational pillar that every society has to achieve for coexistence. What’s more, science has discovered that empathy is the spark that ignites compassion and leads us to help others when they are suffering.

From the psycho-pedagogical and evolutionary point of view, education in empathy and respect for sentient beings is necessary in childhood and adolescence, since they are brain maturation processes that, if progressed normally, will make it possible in adulthood better weigh impulses, desires, goals, self-interest, norms, ethics, and even altruism, and generate a more complete and sensible behavior.

Slow human maturation increases flexibility just as we go out into the world that we will meet as adults. Teaching empathy and responsible solidarity helps make this process better. In fact, for example, in Canada, 90% of schools offer ‘SEL’ social and emotional learning programs with satisfactory results. Empathy can be exercised. Some researchers, such as Tania Singer (a social neuroscientist at the Max Plank Institute for Brain and Cognitive Sciences in Leipzig, Germany), support that to lead a healthy life we ​​need an education oriented to inner values.

It is necessary to consider values ​​such as solidarity, cooperation, friendship, peace and tolerance as a fundamental part of school education, for the education of childhood in prosocial behaviors and in the development of emotional intelligence. Coexistence will depend on controlling impulses and anger, avoiding social isolation, and regulating emotions.

It is very beneficial that school learning encompasses as much diversity as possible, but learning is never finished. It has been found that the plasticity of our social brain persists even into adulthood and that we can train ourselves to be more kind and generous. Singer has provided pioneering studies to prove it. That there is the possibility of shaping the brain to be more altruistic is a promising prospect for society. One way to bring that future closer, Singer believes, would be to bring compassionate training to schools. Perhaps we would achieve a kinder world, in which innate kindness ceases to be exceptional to become a defining trait of humanity.

Education that incorporates empathy towards sentient beings is also essential during adolescence, since it is a stage aimed at achieving autonomy. In this way, the values ​​that predominate in preadolescence are more conservative than those that are prioritized at the end of it, which tend to openness and change. According to Schwartz’s theoretical model, among the ten types or domains of value, those of self-direction, benevolence and universalism (which contemplate honesty, responsibility, social justice, union with nature, protection of people and the environment, prosocial interest, transcendence of their own interests …), opposed to those of achievement and power (ambition, control over people and resources, social status …), evolve to a greater extent as they approach 18 years of age, the age at which it is emphasized, above all , the acceptance of others as equals, and there is an interest in the good of others.

Numerous experiences confirm that educating in empathy towards sentient beings prevents bullying and other forms of violence. It is a protective agent. A negative correlation between empathy and aggressiveness has been repeatedly found. Different studies have also associated violent and antisocial behaviors with the absence of emotional empathy, which in turn seems to be the consequence of problems in the neural circuits, since highly empathic people -such as those who risk their lives to help a stranger- they better recognize pain and fear in someone else’s facial expression. The good news, as we have said, is that they are skills that can be exercised and improved.

Let us add that violence is more rejected when socializing and educating, keeping in mind the values ​​of protecting nature.

Studies by Stanley Milgram, a psychologist at Yale University, demonstrated the extreme willingness of adults to do practically anything if ordered to do so by an authority. It all starts when a demagogic leader points to a target group as “the others” and claims that they are a danger to the interests of their supporters. It is a manipulative way of rationalizing violence. A study by the Department of Social Psychology of the Complutense University of Madrid contributes that, in the explanation of the violent acts of individuals and groups, a very important dimension is the moral or ideological justification of violence, either by ideology or by the values ​​of the aggressors (we return to the concept “the others”).

If this irrational destructive argument is dismantled by showing the real violence or, at least, by telling it, we add information and the subject is free from external bias and manipulation. The transparent information that education can provide serves to socially witness a reality and elicits identifications that have enormous potential for social action.

In a study by Ortega, Calmaestra and Mora-Merchán on cyberbullying in the school environment, the aggressors were asked about the feelings that they understood were awakened in their victims. It is of great interest to see that, among frequent aggressors, the most common response was that their victims were not affected by what they did to them, which could imply a significant lack of empathy on the part of cyberbullies or a high degree of moral disconnection .

It seems that the aggressors do not have a perception of themselves as such, they have a high degree of impulsivity, their families have a conflict resolution style based on aggressiveness or many have psychopathological disorders. Many of the aggressions that occur in the school environment have a basis of lack of inhibition, cognitive distortion and psychopathology, all of which do not facilitate the prevention of such behaviors.

Children who are born more likely to have difficulty empathizing tend to have it doubly difficult. They are often unlucky enough to have parents less well prepared for many of the parenting tasks, they do not empathize and they regulate their own emotions less well, so the school must play this role.

From a psychological point of view, it is a scientifically proven fact that a respectful relationship with nature produces positive emotions and physical well-being, and also that nature is an excellent psychotherapist. It is about finding ourselves deeply with ourselves and with others, of contacting nature from respect, and not from a domain that distances us each time from it and from ourselves.

Through positive emotions such as compassion and love, the mind manages to reduce anxiety and fear and increase pleasant sensations. If science has discovered that empathy is the previous mechanism that can activate compassion and induces us to help others when they are suffering, and there is an increase in the number of compassionate people and an advance in the moral level, we would undoubtedly have an immense advantage over the common good in the form of an increase in prosocial behaviors.

Another issue that we must mention is that educating in respect for sentient beings is a matter of social and environmental justice, and that perceiving them as such implies recognizing their rights. Animals feel love and mourning, happiness, attention, conscious imagination, self-awareness, and a wide spectrum of cognitive abilities, personality, social intelligence, etc. Biologists emphasize structural and behavioral continuity, distinguishing between human and non-human animals: we are all children of nature.

In 2012 an international group of neuroscientists addressed the issue of consciousness in living beings and made known the Cambridge Declaration on Consciousness, in which it is recognized that beings of non-human species also possess consciousness. In the presentation of the statement it was said: “We decided to reach a consensus and make a statement to the public that is not scientific. It is obvious to all of us in this room that animals have a conscience, but it is not so for the rest of the world ”.

From now on, then, in Spain children can and should be educated in empathy and respect for animals, humans and non-humans. It is a great advance in a white issue, without political ideology, since it is about experiencing compassion and solidarity towards sentient beings, essential values ​​for the emotional survival of humanity.

However, some political parties have voted against it. But surely many of his supporters respect and protect animals. The painfully cruel vote of its leaders does not represent them on this important issue. It would be a good time to complain to your politicians about your emotional blindness, so that they would reflect on the atrocity they have done.

“They will start to apply in January and will be free”

The Bank of Spain estimates that between 6.1 and 9.9% of Spanish companies will not survive due to COVID