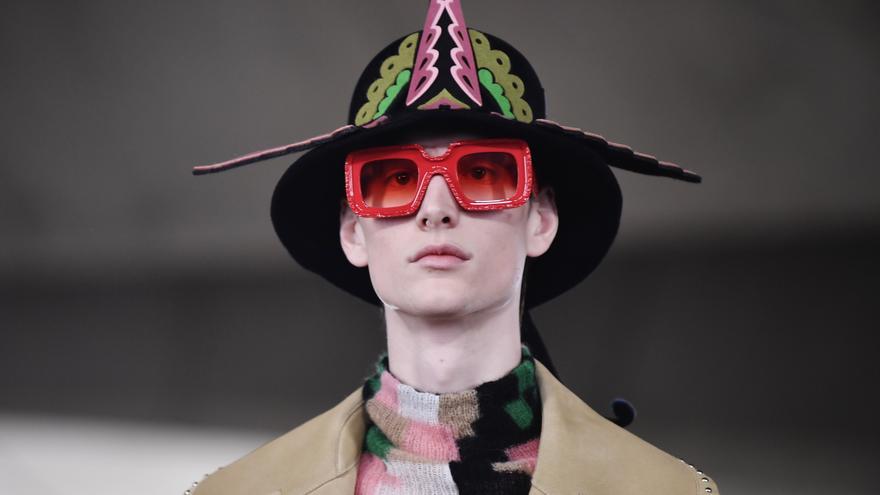 Paris, Jan 23 (EFE) .- British designer Jonathan Anderson, the hand that shapes the garments of the Spanish brand Loewe, only needed a few months to adapt to the virtual format imposed by the pandemic, as he demonstrated this Saturday in his collection for men, loaded with conceptualism and free of conceit.

When many accuse the industry of having emptied itself of messages and worrying only about marketing and appearances, Anderson uses his own explanations to unveil his men’s line for fall-winter 2021/2022 within the calendar of Week of the Week. Paris fashion.

“I think there is a lot we can learn from this stage, especially the dialogue. In fashion we lacked conversation, a real and creative conversation about creations,” Anderson told reporters at a Zoom meeting.

In the video that served to show the line, distributed on networks and on the website of the Haute Couture and Fashion Federation, the models appear on an emergency staircase while Anderson narrates the inspiration.

“I want to go back to the catwalks but restrictions are good for creativity. I like to talk to people, I am a communicator and I think it is good for my buyers and the press to get to know me better. Before, everything was about the first row of the parade, now there is no that, no celebrities “, highlights the designer.

The creator paid tribute to artist Joe Brainard, whose work on collages and book designs he captured in prints and jacquards that decorated clothing and accessories.

LEARN FROM THE PAST

The most iconic subcultures of the last 50 years are mixed in the garments with striped sweaters inspired by the “grunge” movement, “wallabee” shoes of the rave culture and their immense pants, the woolly fur coat of the hippies or the pants of leather, decorated with endless belts, from the punk universe.

All this rearranged with respect to the codes of the Spanish house, owned by the LVMH conglomerate, which prioritizes craftsmanship and natural materials.

On the inspiration of this subversive culture that permeates the collection, Anderson explained that “it is not about nostalgia but about learning” from the past and being curious.

“I think when I look at that time I see an anxiety to reclaim individuality. What I like about these moments in history is that they transformed anger and problems into creativity, in things that we know today and I feel that there is a lot to learn from them. artists “from that time, added Loewe’s creative director.

The camel cashmere coat, an icon of the feminine wardrobe, becomes a structured skirt-bermuda up to the warm, the trenchcoat is recovered in a more angular silhouette, marked on the shoulders and flowing in its fall, and the cardigans are combined with trousers matching “culottes” type.

The Brainard prints give life to the collection, in vibrant colors but where the great classics prevailed: navy blue, beige and black.

The attention was drawn to a series of t-shirts and sweaters that were tripled: one shirt had another two sewn on the front, as if they were multiplying, a tribute also to the pictorial assemblages of the New York artist.

“We also have these triangular shaped pants that when you open them are like two rectangles. I like the idea of ​​a pants that becomes a show piece”, says Anderson in the video, considered one of the best designers of his generation and certainly one of the few who feels comfortable explaining his concepts.

In the accessories, Anderson recovers the wardrobe, such as the “Chelsea” type ankle boots and suede laced shoes, while the bags are rejuvenated with the “collages” of Brainard, such as a fanny pack with the work “Pansies” worked with the leather marquetry technique.

For the presentation, Loewe edited a 200-page hardcover book dedicated to Brainard’s work and also showed part of its Eye / Loewe / Nature collection, focused on patchwork patterns, recycling and playing with the mix. styles such as sports, military or “vintage”.

A painting by Van Gogh, which has not been seen in public in a century, goes up to auction