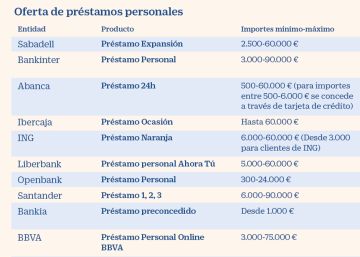 Although the demand for consumer loans has slowed in the last year around five percentage points, according to data from the Bank of Spain, the fact is that 15.7% of Spaniards say they usually finance their holidays with these products and 13.1% will do so this summer, according to a report published by iAhorro. The banks have a wide range of consumer loans as well as credit cards that allow to postpone the payment of incidentals or that much desired trip.

However, before deciding on one of these forms of financing, it is necessary to consult the interests associated with these credits, since the amount requested initially can be considerably increased. Likewise, from HelpMyCash they warn that "we should not dedicate more than 35% of our regular income to the payment of all our debts, that is, the sum of the mortgage, card debts, loans, etc.".

In this sense, the annual equivalent rate (APR) associated with credit cards is generally higher and is around 20%. Meanwhile, the APR of personal loans varies depending on the amount requested, the repayment term and the characteristics of the client, although on average they reach a maximum of 15%. According to the report The loans that citizens ask to go on holiday of iAhorro, among those who are going to request financing for their vacations, 65.5% will opt for a loan from a bank, while 19.1% will choose the card of credit and only 15.4% will opt for the financial agency of travel.

And is that each of these products has its peculiarities, which must be studied to know if it is better to opt for one or the other. Consumer loans allow you to request higher amounts, up to 90,000 euros in the case of Bankinter, and amortize them over a longer period of time, up to 96 months. However, unless holidays require a very high outlay, this type of product may be unprofitable since smaller amounts with shorter repayment terms tend to have higher interest rates. An example of this is the Sabadell Expansion Loan. When applying for a loan of 2,500 euros (the minimum available) and pay it in the shortest period (18 months), the APR amounts to 20.48%, while if the loan amount amounts to a maximum of 60,000 euros and 96 months of amortization, the APR is cut to 11.63%. Also, if the amortization period is too long for the quotas to be low, "the final price will be higher, since interest will be generated for longer and, in addition, your refund can be combined with next year's vacation" , remember from HelpMyCash.

However, the interest rates applied also depend on the level of risk of the client as well as the link of this with the bank. While the Consumer Loan 1, 2, 3 of Banco Santander is only available to customers of Account 1, 2, 3, the one granted by Evo Banco, one of the most attractive in the market due to the low variation in applied rates, grants an APR of 9.27% ​​if the applicant contracts life insurance at a single premium and pays the payroll in the entity and elevates it to 9.87% if it does not meet these conditions. Like Evo, the interest rates applied by Liberbank and Deutsche Bank for their loans vary very little, with the minimum APR of 7.93% and the maximum of 8.5%, for the former, and between the 6, 43% and 6.48% for the seconds.

Likewise, it must also be borne in mind that these credits may entail an opening commission, which ranges between 1% and 2.5% of the loan amount. However, ING, Liberbank, Openbank, Evo Bank, Deutsche Bank, CaixaBank and Kutxabank lack it.

To this offer available on the websites of the entities must be added the credits pre-granted by the entities to their clients. Depending on your income, your expenses or if you have other loans in progress, banks offer loans at better interest rates and even higher amounts. In fact, according to the iAhorro report, 27.6% of those who finance their vacations with credits will opt for pre-granted loans.

If the option chosen is a credit card, the APR may exceed 20%. However, you can also choose to pay the payment at the end of the month, in which case the bank will not apply any interest.

In this sense, the Organization of Consumers and Users (OCU) and the Bank of Spain have warned on several occasions about revolving cards, a type of credit card in which the customer can only opt for deferred payment or loans granted. through cards. Clients have the option of fixing the monthly payment or paying a percentage of the outstanding debt, all at interest rates that are much higher than the average for consumer loans in Spain, which stood at 8.4 in April. %, according to the data of the Bank of Spain.

The OCU recommends opting for the second payment option since if the first option is chosen and a very low amount is set, taking into account the high associated interest, the debt, instead of decreasing, continues to increase. However, it also warns that the payment of a percentage of the credit consumed is not a good option either, as the amount to be reduced is reduced, the amount of the installments decreases, the interest increases and the debt is not paid off either.

Therefore, they advise opting for the payment at the end of the month or postponing only those amounts that can not be assumed and attempting to cancel the debt early as soon as liquidity is available.

In addition to the APR, you also have to see if the card has maintenance costs. Most of them are issued free of charge and do not entail any subsequent costs, as long as the user is a client and has some connection with the bank -such as opening a specific account or directing the payroll- or making a minimum expenditure on the year. Of the offer analyzed by this newspaper, only the Carrefour Pass and the Halcón Viajes card are free and do not require linking. On the other hand, the Visa B the Travel Brand carries an associated expense that depends on the postponement chosen: if the customer chooses to pay for the purchase in seven months, it will entail an initial fee of 11.25 euros, whereas if he postpones it for 11 months, this fee will rise to 16.5 euros. Likewise, financing with the El Corte Inglés card only includes management expenses (12 euros) if the disbursement is to be made in a period of three months.

However, these products also include certain types of advantages, which in fact are used by banks as a claim for their use. The Credit_ON credit card from Bankia offers a discount of 2% for refueling at Galp gas stations and 3% at Shell, while ING fixes it at 3% for both service stations and Abanca increases it to 4% on the first.

The Carrefour Pass card returns 4% of the cost in Cepsa, in addition to 5% of the Orange invoice or up to 8% in the electricity consumption and up to 25% in the gas fixed with the EDP company, between other promotions These amounts are reimbursed bimonthly in the form of a savings check for Carrefour purchases.

On the other hand, Visa B the Travel Brand offers a discount of 7% when hiring a trip while the Halcón Viajes card returns between 6% and 3% in purchases in Halcón Viajes or Viajes Ecuador, depending on whether you choose the Deferred payment method or end of month.

The WiZink promotion is different and gives the customer 25 euros after making the first purchase with his Gold card.

On the other hand, most of these products include travel assistance or accident insurance and in some cases insurance for purchases or for theft, ATM robbery and fraudulent use, such as the Tú de Abanca card.

It is important to consider if your use will be abroad and to make payments in a currency other than the euro. In the latter case, most entities charge a commission. However, the Crédito Mundo 1, 2, 3 credit card of Banco Santander allows any type of operation in another currency to be carried out at no cost, while the Bankia Credit_ON limits cash withdrawals per month without commission at ATMs located outside the Bank. Spain. Openbank, meanwhile, only charges the commission set by the cashier, provided that the operation is carried out in a country of the European Union. Likewise, withdrawing cash with credit cards, even in an office of the entity itself and in Spain, usually entails a commission of around 3%.

Paying with a card or withdrawing money in another country and in a currency other than the euro entails an extra commission – added to the one applied by Visa or MasterCard in purchases, and the cashier, in cash withdrawals – with the majority of credit cards. debit and credit of traditional entities. In recent years, several online bank cards have emerged that eliminate these additional fees.

The one from Bnext returns the commissions for purchases in another currency up to a maximum of 2,000 euros per month. It also reimburses the fees charged for withdrawing cash at any ATM, with a maximum of three times per month.

The N26 card is similar, although it increases to five the number of withdrawals of Euros in ATMs in Spain and abroad, and does not limit purchases in another currency without commission.