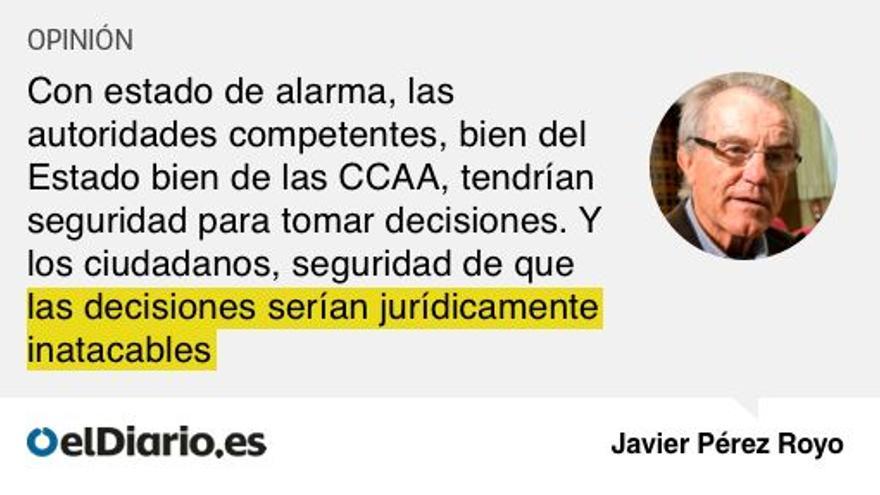 The Order of the Ministry endorsed the Declaration of Actions Coordinated by the Interterritorial Council of the National Health System, a declaration that had not been approved unanimously, but by majority. Several Autonomous Communities governed by the PP or by the PP-C’s and Vox plus the Autonomous Community of Catalonia voted against.

Only the Community of Madrid filed an appeal against said Ministerial Order before the Contentious-Administrative Chamber of the National Court (AN), requesting the adoption of precautionary measures, on which the AN has not yet ruled. Yes it has, rejecting them outright, on the adoption of very precautionary measures requested by a lawyer and by Vox.

Auto 128/2020 is not a firm car. There is an appeal for reconsideration and an appeal against him. In my opinion, the appeal for cassation could be filed directly without first having to file the appeal. But, in any case, it would be necessary to lodge an appeal and wait for the answer.

I heard at Hora 14 on Cadena SER that the president of the Community of Madrid has announced the withdrawal of the request for precautionary measures to the AN, which has an explanation, since materially the precautionary measures already have them with Order 128 / 2020 and if the request for such measures is not withdrawn before the AN, it could find that the AN resolved in a different sense than the Contentious-Administrative Chamber of the TSJCM has done.

Legally the situation is devilish. The Ministerial Order is applicable at this time throughout the territory of the State, Madrid included. It has not been appealed by any other Autonomous Community and, therefore, it is applicable in the territory of all of them. It is also applicable in Madrid, since on a Ministerial Order such as the one issued by the Ministry of Health on September 30, 2020, only the AN can pronounce in the first instance and the Supreme Court eventually thereafter. The Contentious Administrative Chamber of the TSJCM, like that of any other Superior Court of Justice of any other Autonomous Community, cannot rule on it. Formally, the Ministerial Order remains in force for the Community of Madrid.

At the same time, however, the Community of Madrid, unlike what the other Autonomous Communities have done, has issued an order that reproduces the content of the Ministerial Order and has submitted it for ratification by the Contentious-Administrative Chamber TSJCM, with a known negative result.

The Contentious-Administrative Chamber of the TSJCM has disavowed the Ministry of Health, but cannot disavow the Ministry of Health. Only the NA can do it. Can a Ministerial Order that is applicable throughout the territory of the State be left without application because the Contentious-Administrative Chamber of a Supreme Court of an Autonomous Community has not ratified the order of a Council of said Community?

But it is not hidden from anyone that the matter has a political aspect, to which Auto 128/2020 is not alien. Due to “institutional loyalty” the Contentious-Administrative Chamber of the TSJCM should not have pronounced until the AN had done so on the Ministerial Order, since the Order of the Ministry of Health reproduced the content of the Ministerial Order and was already He had filed the appeal against it with the AN. Anticipating the AN’s decision meant adding fuel to the fire of the political debate between the State and the Autonomous Community of Madrid, making it difficult to find an answer to an urgent problem that is acquiring distressing dimensions.

On July 15 I posted right here “Why the state of alarm is still essential“What has happened and continues to happen since then has only confirmed in my opinion. Spain is materially in a state of alarm. The pandemic has placed us in an alarming situation. And if the state of alarm is not in the Constitution to deal with emergencies like this, what is it for?

With a “parliamentary” declaration of the state of alarm, which does not have to be limited in time, the competent authorities, whether they were the State or the Autonomous Communities, would have security to make the decisions that had to be taken to face to virus “outbreaks” wherever they arose. And we citizens would have the assurance that the decisions made by the competent authorities would be legally unassailable. We did not have to be pending appeals and counter-appeals before the Courts of Justice.

I fear that the path of the state of alarm has been closed. With this we have condemned ourselves to improvisation. Can anyone be surprised that we are as we are?