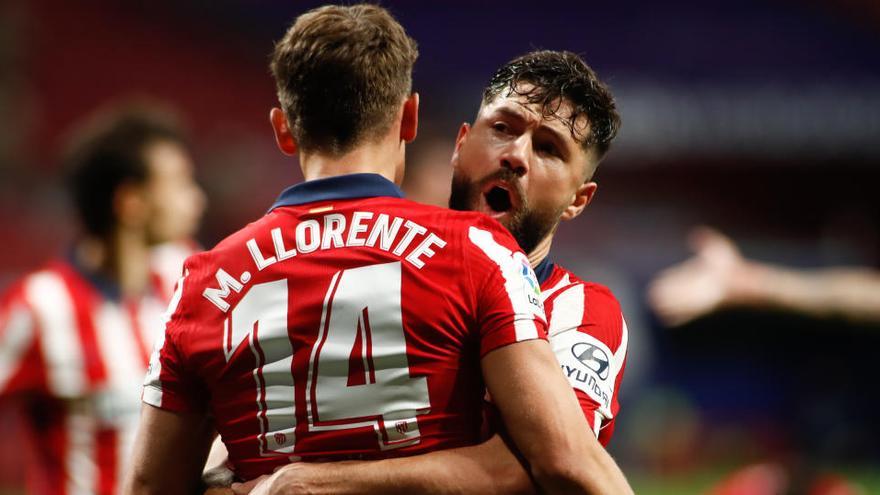 Marcos Llorente and Luis Suárez are worth their weight in gold for the leader of LaLiga Santander, a Atlético de Madrid that thanks to the goals of both, he inflated his mattress to six and eight points over Real Madrid and Barcelona after coming back to a good Athletic (2-1), who hit first with a goal from Íker Muniain.

There are no two footballers as decisive as them in the Argentine team Diego Pablo Simeone. The Madrilenian, with his tenth goal of the season, once again getting his team out of trouble at a key moment, just before the break; and the Uruguayan, the great ‘9’ that this team had not enjoyed in recent times, who after Llorente caused a penalty, scored it and already has 18 goals.

In both of them, and at most in the Belgian Yannick Carrasco, the offensive power of the leader was summarized. Not in the Portuguese Joao Félix, headline but as inconsequential as on other days in this afternoon’s duel, corresponding to the postponed by the snowfall caused by the storm ‘Filomena’ in January, in which the leader played to breathe air to his advantage and he did it, not without suffering.

The Luso was the only change compared to Sunday and had been the protagonist in the previous one due to its lack of influence in recent times -substitute until today in six of the last ten games in which he was available- and because of the dichotomy between his talent and the “will” that his coach claimed in the previous one, collectively.

That will seemed to be shown by the Portuguese, who came out as a midfielder in attack but was located as a right inside in the 4-5-1 Atlético in the defensive phase, as would the Argentine Ángel Correa, whom he replaced this afternoon. He barely showed a few drops of talent: a driving in which he left between two players and raised the ball over a third, but it was long. Not much else was known about him, except when he was fouled by the Basque team.

It was part of a good start to a bossy Atlético, dominating as in the derby, embracing Athletic, but without testing Unai Simón. It lasted just 15 minutes. Those of Marcelino García Toral endured a quarter of an hour of downpour and began to be applied in the intensity that the game required.

After winning a couple of duels, the ‘lions’ saw the light, began to enjoy the ball shaking off the local pressure and were able to raise their heads. Óscar de Marcos found a corridor for Iñaki Williams to uncheck, and the pass behind the ‘panther’ was touched by Muniain, half falling and with his supporting leg, which resulted in a high kick that Jan Oblak did not expect and was the 0-1.

Again fitting, for the tenth duel of the last eleven, again uphill, as in seven of those eleven, Atlético was forced to come back and found nothing more than two shots from Carrasco. Athletic was calm: they always arrived before all the balls, they combined wisely and looked ahead.

The leader’s outbursts were no longer the result of his dominance, but of necessity, but in the last play on the brink of halftime, a very long action with several attempts, a center from Lemar on the left from the baseline was connected by Llorente with a chopped header, which hit Unai Núñez, misleading Simón and converting the tie right on the edge of halftime.

The goal took away from Athletic the prize for its great first half and gave life to the leader, who recovered the three centrals and the lanes after the interval. On one of those lanes, the right, and in a connection analogous to the derby goal -Trippier for Llorente’s career and the pass to space for Suárez- the Uruguayan ended up facing Núñez on the edge of the area, which was just enough for him to take penalty. The Uruguayan completed the comeback from eleven meters.

With the goal, Atlético seemed to settle. Only an ambitious Carrasco continued to want more, with another distant shot and an attempt with Suárez in which he had to finish more. The message from the bench was clear, with the entry of Uruguayan midfielder Lucas Torreira by his compatriot Suárez.

Marcelino looked for lungs to go for the tie in Dani García, Asier Villalibre or Unai Vencedor, but without the freshness in the ideas of the first half, against an entrenched Atlético that finished with five defenders, four pivots and Correa as the only attacker. The wall resisted thanks to Oblak stopping a very clear header from Núñez, and the leader will defend six points over Barcelona and eight over Real Madrid in the next thirteen days.

Incidents: match corresponding to the eighteenth day of LaLiga Santander, postponed in its day by the storm ‘Filomena’, played at the Wanda Metropolitano stadium without an audience due to health measures against the coronavirus pandemic.