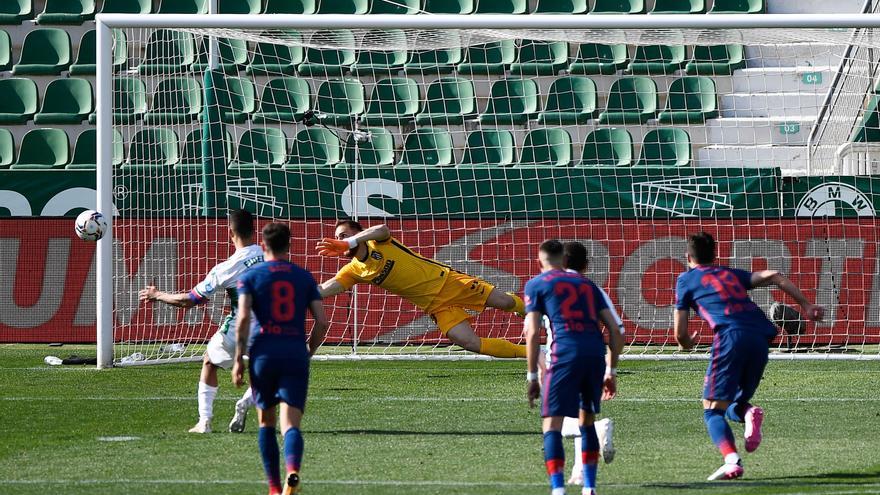 A goal from Marcos Llorente and a post, which prevented Fidel’s draw from a penalty in the last minute of the party, protected the leadership of the Athletic on your visit to Elche (0-1) and allow the Madrid team keep depending on yourself to win the title League four days to go.

Diego Pablo Simeone’s team cemented their victory in a excellent first half hour of game. After the goal, the leader took his foot off the gas and decided to save energy for future battles, which was about to cost him dearly in the last minutes, in which Elche grew and brushed the draw with the penalty to Fidel’s post .

Atlético de Madrid jumped to Martínez Valero willing to impose your leadership status from the first moment. Simeone already launched an offensive message from the line-up and the team, with Kondogbia as the only defensive support in the midfield, came out determined to settle in the field of Elche and put a fence on their goal.

Correa and Luis Suárez, after a brilliant personal action, were the first to unleash the storm over the Elche area, which the VAR saved, after a quarter of an hour of play, from the first goal, scored by the Uruguayan offside. Kondogbia, Llorente and Correa tested Gazzaniga’s reflexes, stunned by the amount of work that was coming his way.

Atlético ended up finding the goal in the equator of the first period after an action by Carrasco’s wing, whose pass to the heart of the area was used by Llorente to send the ball to the net with the collaboration of Josema. The goal relaxed the leader and forced Elche to take a step forward, although the Elche team had no strength or arguments beyond set pieces to approach Oblak’s domains.

The first half was closed with controversy, since the referee, at the request of the VAR, corrected his initial decision to punish with a penalty a shot by Correa that hit Diego González on the hip and arm.

Escribá tried to wake up his team after the break with two changes, but the game script did not change too much. Elche tried to stretch their possessions to gain confidence through the ball against an Atlético comfortable in defense and crouched waiting for their chance to sentence.

The meeting declined and Elche, with nothing to lose, was advancing lines, although he was increasingly exposed to the cons, like the one that Luis Suárez took advantage of to score, although again offside. As the minutes passed, Atlético faded in attack, so they decided to take shelter near their goal and give the initiative to the rival, who appealed to the veteran Nino to find something different in attack.

Without the shine of the first part, For Atlético it was enough with the forcefulness of Kondogbia in midfield and the quality of Carrasco to keep the game under control, although Elche, already in the final moments, had the tie very close. First with a high Barragán shot, after a set piece action, and already in the last minute, after an innocent penalty committed by Llorente, through Fidel, whose launch of the maximum penalty crashed into a post.

Referee: Melero López (Andalusian Committee). He showed a yellow card to Lemar and Carrasco, for Atlético de Madrid; and to Pere Milla, Lucas Boyé and Barragán, from Elche.

Incidents: Match corresponding to the thirty-fourth day of the League played at the Martínez Valero stadium behind closed doors.

Real Madrid play the League against Granada without defense

Roland Garros will open to the public, but will ask to prove the vaccination or a negative test