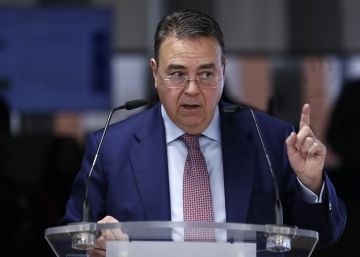 During the presentation to the analysts of the semiannual results of Enagás, your president, Antonio Llardén, has disqualified the CNMC for the cut to the income of the gas networks that it raises in its circulars on the future methodology of remuneration of these regulated assets. A new regulation that, according to the company, "puts the stability of the whole energy system at risk".

According to Llardén, the technical services of the CNMC "they are disconnected from reality of the evolution of natural gas in the energy matrix. "In the case of Enagás, he added," they propose an accelerated fall in the company's revenue system (up to 40% in six years), arbitrarily and without taking into account the key role of gas infrastructure in the current energy context. "

In short, "the efficiency and balance in the gas system of Spain is jeopardized," said the president of Enagás, who has questioned the proposals of the CNMC, because "profitability must be measured taking into account the future flows generated for an investment and not measuring ratios set at a given time. " In this sense, he considers that "the remuneration for the management of an infrastructure must be linked to two large parameters: efficiency and demand for busy gas".

In his opinion, the circulars put credit ratings at risk of the gas, both quoted and unlisted, "which are key to a sector as capital intensive as energy." The proposals for the electricity system are continuous, he added, "but absolutely rupturist for the gas company, when in the current context of energy transition the coordination of both systems is fundamental, and therefore has demanded a coherent regulation for the entire energy sector" .

Llardén has questioned that the new model will reduce the final prices of gas, as transport tolls barely represent 10% of the total cost of gas infrastructure and are a small part of the energy bill in Spain.

Enagás is preparing your allegations before the CNMC, whose term ends on August 9, which will focus on the technical aspects of profitability and efficiency for a gas transport operator.

"I would have been grateful to have some previous meetings with the CNMC before its technicians took out the proposals of circulars and has indicated that in what there is going to be now what they want is to discuss what will be the role of the gas chain in ten or twelve years and not a mere fact. " Llardén recalled that what is now on the table are proposals from a technical service that have not been discussed by the full CNMC and has criticized the process of preparing the circulars, with a "great speed" and no possibility of holding meetings prior to the regulator, something common in the surrounding countries.

Enagás prepares its argument against the CNMV compensation proposals for gas distribution. And he does it with forcefulness. The company assures that it is working "intensely on the allegations to the published circulars" and, as it has been announced in a document sent to the CNMV, will use economic and legal data to try to lower the proposal.

In the presentation of the company's semi-annual results, which fell 1.6% between January and June, to 216 million, Enagás argues that the reform is a disincentive to "effective management, productivity improvement and new investments" and "It does not contain incentives to keep transport infrastructure available to fulfill the role of the National Integrated Energy and Climate Plan (PNIEC)." It therefore "endangers future investments in new services and committed objectives to combat climate change."

In addition, the CNMC circulars "do not respect the criteria of reasonable profitability for the gas activities that it establishes the Hydrocarbons Law ". Enagás says that the current profitability of Enagás' regulated business "is reasonable, similar to that of other European TSOs (carriers) and ensures the recovery of investments made during their useful life period." Finally, it generates "uncertainty and legal instability of a capital intensive sector"

Therefore, it threatens to adopt the legal actions and measures that are relevant at all times in the defense of its interests and those of its shareholders "

Enagás points out that the remuneration proposal "is not consistent to achieve the objectives set" by the competition body itself. On the one hand, he says, because current returns "are in line with those obtained by other European TSOs (gas carriers) or comparable companies with a similar risk profile." In addition, regarding this proposal, Enagás says that the reform will have no effect on the customer invoice since "it does not suppose a real impact in the rates of the final users". Thirdly, he points out that it discourages "effective management, productivity improvement and in its objective of promoting the energy transition through the National Integrated Energy and Climate Plan (PNIEC)".

Enagás points out that the new estimate of growth in demand for natural gas in 2019 is 11%, a very high growth in a gas system context "that generates an annual surplus, with a high use of infrastructure and guaranteeing security of supply ".

The company also attacks the "leaks in the media about the content of the circulars" that occurred since mid-June and that, he says, have made the Spanish energy companies lose "more than 8,000 million market capitalization ".

Therefore, the group describes the fronts on which it will try to lower the CNMC proposal. In addition to the allegations, Enagás will carry out a "coordination with companies in the sector" in the sense that they will ask the Ministry of Ecological Transition and CNMC "the right for the sector to be heard in the prior consultation process".

In addition, he adds, he is maintaining "intensive institutional contacts" to explain "the magnitude and general consequences that the approval of these circulars would entail." It also announces an "intense and transparent communication policy with institutional investors, minority shareholders, rating agencies and media" on the processing of circulars, "its impact and the company's position in this regard."

The semi-annual result announced by Enagás is in line with the objectives set for the year as a whole. The contribution of the investees to the net profit was 30%, with an important weight of the international subsidiaries.

During the period, the company invested 645 million euros. This figure corresponds mainly to the acquisition of a stake in the American company Tallgrass Energy. In addition, the company has continued to make investments in the Trans Adriatic Pipeline (TAP) project. This gas pipeline, which will link Turkey with Italy through Greece and Albania, has a construction progress of 88.5%. Enagás participates with 16% in this infrastructure.

On the other hand, the consolidated net financial debt of the company, in which SEPI participates with 5%, stood at the end of the semester at 4,117 million: more than 80% at a fixed rate.

According to the system manager, the demand for natural gas in Spain in the first half of 2019 has increased by 9.4% compared to the same period of the previous year, due to a higher demand for electricity generation (65%) due to the shutdown of thermal coal and industrial consumption. Industrial demand, which accounted for 56% of the total, grew 3.8%, the highest value since data is available.

The forecast is for gas demand to grow 11% this year, according to company data.