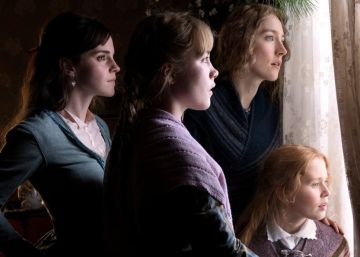 Greta Gerwig believes she has written a love letter to Louisa May Alcott and her famous initiation novel Little women, but in reality he has written it to himself. The actress and filmmaker returns to her alter ego on the screen, actress Saorsie Ronan, to play Jo March, in turn alter ego of the American writer and archetypal hipster and free woman. The result is a film at times charming and happy but excessively self-complacent, in which a luminous Ronan stands out and disappoints an uncontrollable Timothée Chalamet, so delighted to know that a key character is loaded. Despite being directed with talent, Little Women is far from Gerwig’s opera prima, Lady bird, that absolute jewel that narrated with autobiographical dyes the end of adolescence of a young woman from Sacramento who dreamed of flying away.

There are at least three previous adaptations in cinema of the famous work that Alcott published in 1868. That of George Cukor, from 1933, with Katherine Hepburn bringing out the indomitable Jo March; the 1949 Technicolor classic, directed by Mervin LeRoy, with June Allyson in the lead role and Elisabeth Taylor, Janet Leight and Margaret O’Brien in that of her sisters; and the 1994 one by Australian director Gillian Armstrong, with a convincing Wynona Ryder as the fancy aspiring writer. Gerwig is unmarked of his predecessors beginning his history where the others end, that is to say by the definitive conversion of Jo March in novelist. From there the film is built giving intermittent step to his memory: the family nostalgia of a woman who discovers that the domestic is also a powerful literary material.

Despite its molasses and its anachronisms, Little Women It is still a novel of great relevance. Gerwig updates, however, his feminist message using the biography of Louisa May Alcott herself. Uncomfortable with the fixation of female characters with marriage, she manages to introduce her reservations to a social convention so rancid that Alcott (raised in an environment of 19th-century philosophers and pedagogues who fed her rebellious personality) rejected her without hesitation in lifetime.

In addition, he refreshes a character who was always portrayed as Jo’s nemesis, his sister Amy. Now interpreted by Florence Pugh, the character claims his contemporary profile: coquetry, femininity and cursilery are not offensive. Not only do you not have to behave like a man to appear clever and insumisa, but copying your patterns is more outdated than ever. The problem is that Gerwig’s efforts to update the most obsolete aspects of the novel make a dent in the heart of the story and highlight the internal seams of the film. In the first sequence, Jo March receives advice from his editor: the sermons scare the readers. Unfortunately, Gerwig has not applied that warning to herself and, obsessed with safeguarding the actuality of her message, mortgages the excitement for an orphan and mechanical sermon made only for the immediate satisfaction of these times.

Filmin premieres “Contiguo”, a story of love and positivism in a pandemic