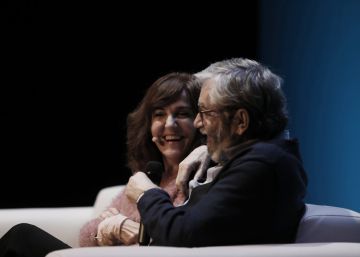 I wanted to play a desktop at the home of the couple of writers Antonio Muñoz Molina Y Elvira Lindo and, explained the literary director of Eñe Festival 2019, who thought it too late to properly recreate the scenery. What he did achieve Sergio del Molino was to generate a relaxed and spontaneous talk at the opening ceremony held on Friday. It was not a couple therapy session, much less, but a chat between friends. "They are a rare case of a couple of writers of the same size," Del Molino explained just before going on stage at the Fernando de Rojas Theater in the Madrid Fine Arts Circle. "Besides his works have the same border spirit on which this edition of the festival is based, they have cultivated many genres."

In the review that Del Molino encouraged to do to the couple, there was space to praise the rice of Muñoz Molina and the cauliflower that he adds; to try to imagine how jazz musician Lester Young walked with moccasins through the snow; or to claim the program Heart, that the author of Full moon It is not lost. That public television space "achieves absolute banality and has that language with incredible expressions like a couple is trying to save theirs," summed up the academic fun.

Lindo spoke with admiration of how hard her husband is: “He is very persevering and I am very nervous. It has calmed me down and made me more careful with what I write. We monitor ourselves so that the ego and vanity do not increase. ” The winks and mutual compliments followed. Muñoz Molina spoke with rendered admiration of Lindo's free spirit. “With her I have learned orality and also irreverence. She is an acidic woman, full of irony, without respect for hierarchy, something uncommon in literature, where we are sometimes cowards. ” She thanked him on the couch.

Manolito Gafotas, the character who threw Elvira Lindo to fame, and who turns 25 this year, also had his place in the talk. The writer said that an American producer is interested in a new project based on this character. For Muñoz Molina more than envy, sin in Spain is condescension, and claimed the value of Manolito, which some wanted to adapt to the turns and expressions of other countries. "But no one would have thought of Spanishizing Cortázar," he lamented. The writer commented how reading the second part of The Quijote it makes her think about how much she has taken from Cervantes. Sancho's exaggerated expressions, including the eschatology for which they pointed out her in the United States, are in that work. "That makes you have a shield," he said.

Before closing the event and receiving a closed applause from the audience that filled the auditorium to the top, Del Molino asked them about New York. “There you learn to be stronger, not to complain so much, you become resistant. Here is the good weather, the ability to interact, the bars, ”said Lindo. For Muñoz Molina "the weather of crude capitalism is very strong", and is exposed in any winter in Manhattan. Thus ended this oral "deambulology" among the trio of friends, by using a term that the author of The Polish Rider he claims, that thinking in movement, that walking, moving forward and opening new ideas, even from a sofa.