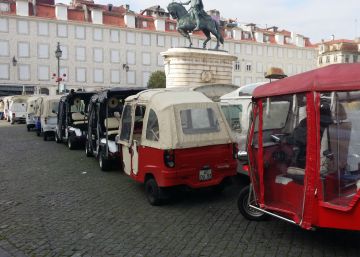 Lisbon City Hall It will close its historic center to the traffic of private vehicles from June. It is the most radical performance in the history of the chaotic transit of the Portuguese capital, although it provides for exceptions. The ban saves the vehicles of residents in the area -Chiado, Baixa, Alfama, Morería- commerce, public transport, emergency services, taxis and electric cars.

“With this measure we will remove 40,000 vehicles from the center, 40% of the total,” said socialist mayor Fernando Medina. They are the most popular streets in the city, such as the Garrett rua, Avenida da Liberdade, Madalena or the Commerce Square. The objective is to reduce the emission of COtwo 60% before 2030 and achieve carbon neutrality in 2050, national measures but in the case of Lisbon it is more difficult to comply because the airport is within the city.

The Reduced Emissions Zone (ZER) will be applied from six in the morning to midnight, during these hours the transit of vehicles of more than 7.5 tons is prohibited, except urban and tourist cleaning trucks. The control will be electronic, without physical barriers. Until June, residents must request a diptych to place in their cars; in July it will be a month of sensitization and already in August the police will begin to fine.

Vehicles prior to the year 2000 will also be prohibited, according to the mayor’s office. A few years ago, the City Council already tried a restriction on the age of the vehicles and, although it excluded the old taxis, it was never effective because of doubts about its constitutionality and, in any case, the controversy raised. Now the Consistory wants to justify its title of “green European capital 2020” and a popular awareness, nonexistent five years ago.

The application of the ZER zone will save the emission of 60,000 tons of carbon dioxide per year, according to official data. An electric transport line will open on the main avenue of the city, that of Liberdade, between the Marqués de Pombal and Commerce square, with a three-minute cadence. “The withdrawal of private vehicles will improve the efficiency of public transport,” said the mayor. In the historic center, the tram is the main means of collective transport, but it is always conditioned to the cars not invade its track and paralyze it, which is usual. The drivers refused to photograph the vehicles that parked in the middle of their tracks, a practice, although it seems strange, quite common among the Lisbon.

Lisbon wants to set an example of environmentalism – it is the first city in the south of the continent that achieves the distinction of a green city – and that is why it will extend the bike lanes from the current 90 to 200 at the end of 2021. It will also plant 100,000 trees in the next two years and will reduce surface parking spaces. The ZER returns 46,000 square meters to pedestrians with the closing of streets to motor vehicles.

The Government has risen to the wave and its prime minister, António Costa, has ordered that the ministers only circulate in electric vehicles. The initiative had the response of the organization Zero environmentalist He asked the Government to take the bicycle through the city.