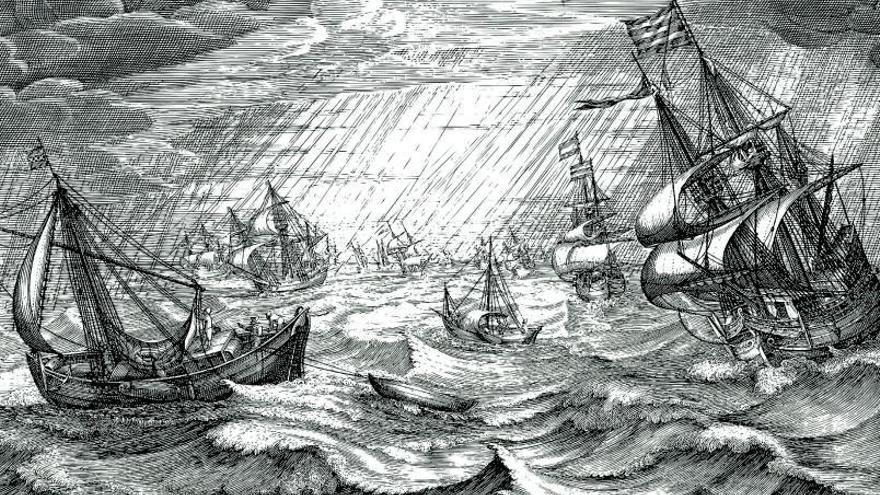 Here is a book for the vicious. Vicious in the 5th meaning that the Dictionary gives that word: the one who practices some pleasant and addictive habit. For example, the habit of reading books about the sea (or the sea, since ambiguous gender nouns allow both articles). It is true that the omnipresence of Wikipedia has restricted us to the vicious of such readings the use of paper: for convenience, above all, since it is usually important bumps. But we resist, balancing hard to hold Huw Lewis-Jones's Navigators (Diaries and Logbooks); Ships (its history through art and photography), edited by Andrew Lambert. Or this work that concerns us today: colossal, colossal (as the editors' note rightly says), entitled The sea and civilization, and that through 20 super, mega, hyper-informed and scholarly chapters is telling us from “it is impossible knowing who faced the sea and the river for the first time ”to the ins and outs of the latest aircraft carriers. With its initial sliced ​​and historical world map. With its more than 100 pages between bibliography and notes. With his photos, reproductions of paintings, various illustrations ... Its author (whoever wants to suppose that by force he had to have a legion of co-writing researchers is very free: read the section, now obligatory, of thanks), Lincoln Paine is a specialist With already five volumes on the sea, as well as articles (in the US sense of the term: not four lines at risk) on different aspects of maritime history. With the manifest purpose of "changing the way you see the world", this man from the marine state of Maine takes us without seasickness and without rest through navigation and shipbuilding in Oceania; in kayaks, mine and pairings; by ancient Egypt; by navigation in the Bronze Age, or the Phoenicians, Carthage and Rome, the monsoons; by China and Southeast Asia in the 3rd to 6th centuries, by the Serse Lima wreck or, the Vikings, the maritime silk route; it pushes us from the Tan Post to the North Son, from the Hanseatic League to the Atlantic after 1492, from the American Revolution to the Korean War… The whole sea, the whole sea and the civilizations that it communicated or produced.

Such a creative effort (colossal, colossal ...) requires the two things that weigh down, in my opinion, the book. Anestilization and decompensation. The first, the lack of narrative style, makes only the very vicious eat it whole. Let's compare. When Paine recounts the battle of Salamina, he does it like this: “The Strait of Salamina is a long and irregular channel, which is protected to the east by the island of Psitalea, and it closes a half mile before opening to the bay of Eleusis… ”. Not a feature of interpretation, just information. On the contrary, let us read the warnings that a compatriot directs - during the same Salaminean deed - to Themistocles, reproduced by Herodotus, in the eighteenth-century translation of Father Pou: “Once they leave Salamis with their ships, goodbye, friend, there will be no more country for whose defense you can fight. Do you know what they will do? each one will return to his city and Greece will perish for lack of advice and wisdom ”. All interpretation, juicy style.

As for the imbalance, when the reader is 100 pages away he still navigates through the XVIII century, and as soon as the steam enters the navigation, the book at full throttle. But where to cut? It may be objected to me. I propose that because of the excessive importance given to the US at sea. Let it be treated like Spain - it is called "Castilla", especially - that sees how Columbus passed through here, the Catholic Monarchs are comparsas in the Colombian company, the "Great and Happily Armada" (the one studied as the Invincible Armada ) two pages are devoted to it. And the Canary Islands… there are twelve.

Is it then a very heavy book? Nothing of that. Read this so handsome: "According to the Egyptian cosmography, Ra had two ships in which he crossed the sky, one for the day, another for the night." Read Chivalrous Chinese Customs on page 235. One caption is titled "The Kingdom of Chola." Read the descriptions of Istanbul or Venice. But there is no shortage of pages (382, for example) in which it takes a lot of reading vice to scale them. It is the vivid style that makes a book always lived, the good telling. Even if it is about the most disgusting. Pigafetta is quoted about Magellan's trip: "The cake we ate was no longer bread, but a mixed powder of worms that had devoured all its substance, and which also had an unbearable stench from being impregnated with rat urine." And enjoyment is difficult if you don't get the brevity of books like, let's say, “Why can't sailors know how to swim? and other maritime curiosities ”, by Nic Compton.

But the effort, yes, it is enormous. Join it to The Mirror of the Sea, by Conrad; Melville's Moby Dick; to Aurora Luque's anthology Aquel to live from the sea and they will be able to have a great marine time ... with the freshness of Homer without going any further: "And he left in silence through the sand of the sea full of rumors."