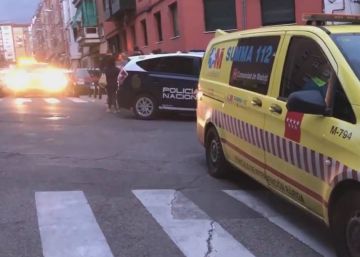 The man arrested this Tuesday after slashing his partner, a 31-year-old woman, In front of his daughters in Madrid, he had a restraining order for victims of abuse. The measure was issued by a court in the Madrid town of Navalcarnero, because they used to live in that area, according to police sources. The aggressor, 42 years old, It was included in the Integral Monitoring System in cases of Gender Violence (VioGén System).

The events occurred around 18.40 on Tuesday in the portal of his home in the district of Ciudad Lineal, before the girls, 8 and 10 years old. FIt was one of the girls who called emergency services to warn of the assault.

Upon arriving at the scene, the policemen spent 15 minutes practicing resuscitation maneuvers on the victim, who was on the floor of the building's portal, with stabbing in chest and abdomen. IThey even went for a defibrillator to the Alcalá Norte shopping center, but finally the woman died due to the seriousness of her injuries.

Some neighbors told the agents in the first testimonies that, somehow, they suspected that the woman, of Paraguayan origin, was mistreated.

She is the fourth woman killed in just 48 hours. On Monday José Luis Abet killed in Pontevedra his ex-wife, Sandra Boquete Jamardo, 39, her sister, Alba, 27, and their mother, María Elena, 59. So far in 2019, 41 women have been killed at the hands of their partners or ex-partners and 30 children have been orphaned. To these data would be added the victim of Linear City and his daughters. It is the worst data for five years.

He 016 It is the number of attention to victims of gender violence. It does not leave a mark on the invoice, but it must be deleted from the call log.