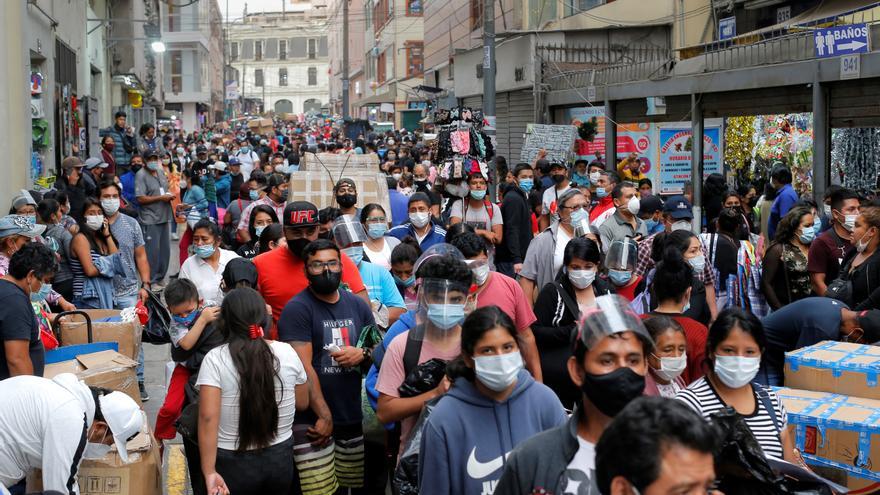 Lima, Jan 18 (EFE) .- The city of Lima, capital of Peru, commemorates the 486 years of its Spanish foundation, six months after the country celebrates the bicentennial of its independence, and in the middle of a second wave of the Covid-19 pandemic that hits her hard.

The Plaza de Armas de Lima was the main setting for the commemoration events led by the mayor, Jorge Muñoz, which included the placement of a flower offering at a monument in honor of the Inca curaca Taulichusco, the last who led the area before the arrival of the Spanish conqueror Francisco Pizarro.

On January 18, 1535, Pizarro dictated its official foundation and for the next three centuries it was considered the viceregal capital of South America.

After independence from Spain, Lima was the capital of the new Republic and the scene of bloody confrontations between different political leaders.

However, in pre-Inca times, between the II-XII centuries, there were several peoples that settled in the valley of the Rímac river, such as the Lima, Wari, Chancay and Pachacámac cultures, which left ceremonial centers and vestiges that survived them.

IN THE FOCUS OF THE PANDEMIC

After raising the Peruvian and city flags, Muñoz explained to the press that “we are in a different time, we are in the middle of a pandemic, more than a celebration it is a commemoration but with the joy and pride of feeling like Lima.”

Muñoz added that “we have to be aware that we are in a second wave, in very complex situations, and that we all have to make every effort to move forward.”

Lima is the region and the most populated city in Peru, with more than 10 million inhabitants, a third of the total population of the country, and therefore it has been the hardest hit by the covid-19 pandemic and is currently going through a second wave of infections with health centers totally collapsed.

The mayor of Lima said that “when one is faced with a situation as complex as this, any measure taken is subject to strengthening, improving or correcting,” when asked about the measures adopted by the Executive to deal with infections, which exceed one million cases and more than 38,500 deaths.

“Some measures have been taken, but we see that the wave continues to grow and I am sure that some more measures will have to be taken,” Muñoz added, referring to a probable new quarantine in the most affected regions.

Faced with the position of several district mayors who demand the closure of all the beaches in Lima and neighboring Callao, Muñoz said that “we must protect citizens” and that “if we have the evidence (of infections in spas), we have to take the measures of the case “.

GREETINGS FROM THE PRESIDENCY AND THE ANDEAN COMMUNITY

The mayor stressed that “we cannot fail to commemorate being proud of being Peruvians, for being Lima residents in particular” and recalled that “Lima is a city with a mixture of cultures at the same time, many cultures but it is only one Lima, thriving, made up of people who are entrepreneurs, fighters and who love their city. ”

In the same vein, the presidency of the Republic, led by Francisco Sagasti, shared a greeting on Twitter in which he expressed that the anniversary of Lima “is an opportunity to demonstrate our resilience in times of pandemic, joining efforts for a society and a more inclusive and sustainable country “.

For his part, the Secretary General of the Andean Community, Jorge Pedraza, also greeted Lima and the people of Lima for the 486th anniversary of their foundation, through his Twitter account.

“As general secretary of the Andean Community, I express my appreciation to the host city of our organization, which has also welcomed me for two years,” Pedraza said.

“I could have sunk, but I trusted my talent and my idea”

Barcelona will host a concert for 5,000 people on March 27