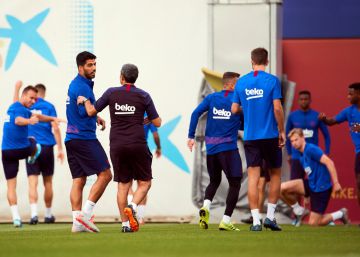 Luis Suarez He is looking for revenge. And it is not the first time in his career. The history of the Uruguayan striker is marked by his self-demand to overcome adversities. He did it in Nacional de Montevideo, when the fans mocked his lack of aim; in Liverpool, indicated by the British press; also in Barcelona, ​​which he risked with his signing after FIFA sanctioned him for biting Italian Chiellini in the World Cup in Brazil. This campaign, a new challenge is posed to the Uruguayan, in the pillory (once again) after getting off the final stretch of last season to be able to dispute with Uruguay the Copa América. The 9 decided to unilaterally operate on the knee and not dispute the final of the Copa del Rey against Valencia. Barça fell to the team that Marcelino then directed and the heavyweights of the group reproached him: "You left us lying."

Faced with the anger of his friends, Luis Suarez tried to explain his decision. “The injury that led me to go through the operating room was due to a meniscus break that I suffered in the tie against Liverpool. That is why I was forced to be operated and miss the final against Valencia against my will, ”the forward justified in a statement last May. “Either they got mad at Luis in Barcelona or they got mad at him in Uruguay. It was a difficult situation of his, ”said Martín Lasarte, the Real Sociedad's technician, who made his debut at 9 in First with National. The tantrum Messi and company passed quickly. The Uruguayan ended his vacation with the Rosario in Ibiza. Of course, Luis Suarez chose to arrive a week before the agreement with the club to the Sports City of Barcelona.

Unlike Messi, Luis Suarez did not want to miss the tour of the United States. “For the club, Griezmann's signing was interesting in many ways. He is one of the best players in LaLiga and is also a way to squeeze Suárez, ”they say from the offices of the Sports City of Barcelona. The dressing room looked suspiciously at the arrival of the French forward, so they informed the president and the technical secretariat. The club, however, turned a deaf ear. “We will see how Antoine fits in the group. He is a player who has always adapted to all the places he has been, ”they emphasize at Barça. Suarez, from the outset, held out his hand to the Frenchman.

After mediation by Diego Godín – intimate friend of Griezmann and Luis Suárez -, the Uruguayan and the French were seen sidelined, connected by their fondness for mate, on the American tour. In the United States they agreed in the two friendlies against Naples, good feelings for Valverde, especially after the 4-0 win in the second duel against the team of Carlo Ancelotti. The Txingurri tried to repeat the formula against Athletic at the premiere in LaLiga, but Barça ended up disfigured and Suárez injured in the solo. A new stumble for the charrúa, who began the course as he had finished the previous one: in the infirmary.

Luis Suarez's injury, unlike Messi, did not suffer complications. “Luis is looking forward to it. This season has competition and knows it. It will be positive for Barça ”, they understand in the coaching staff. The Uruguayan striker returned with three kilos less than his vacation. It was no accident. He changed his diet: no alcohol, little red meat and lots of vegetables. With hydration he has no problems, 9 is a water obsessive. “When I was little I was told that it is good and since then I drink a lot of water,” he explains. The intention of Luis Suarez was to lose weight so as not to overload the knees, especially the right.

"We believe that Luis may be against Valencia," said Valverde, after the Uruguayan participated with the group in the last three training of the squad. "Without Leo there are players who have to take a step forward, as Griezmann did before Betis," said the Catalan coach. A new rematch, nothing new for Luis Suarez.

The club reported the Uruguayan discharge and, at the same time, another setback for Umtiti. After performing new tests on the French player, already injured, a fissure of the second metatarsal of the right foot was detected. It will be low for five or six weeks.