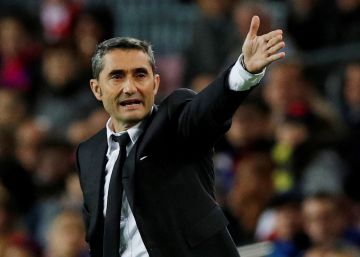 Barça is going from bad to worse if the team's whistle received from their fans after a zero draw with the Slavia of Prague is ignored. The regression is evident and seems unstoppable: there is no longer even the consolation of playing in the stadium, so far an intimidating and winning field, to justify the performance of a team that is very often lost in the opposite field, as already noted in Valencia against Levante. At this step, the only thing that can be presumed and which is the leadership in LaLiga and its Champions group is also in danger.

The classification still serves as an excuse for those who have long referred to the scoreboard after having relativized the role of style with the argument that the game evolves and today there is no more reference than the Premier League. The problem arises when you stop winning, and Barcelona is losing more and more games and titles: in two and a half years it has gone from the League and Cup double to conquer LaLiga. Better not to talk about the Champions since Berlin 2015.

The feeling is that this time Valverde no longer knows what to do after touching and changing several players and modifying a very assumed system since the time of the Dream Team and then sacralized by the figure of the midfielder with Busquets. Barça does not unbalance or control the matches because individualities no longer mark the differences except for Messi and collective football does not press or speed the ball, so that he often feels subjected to the rhythm of the opponents, he gives same as the Levant as the Slavia.

The azulgrana do not act as a team, nor do they have a stable game plan, they lack continuity and often fail the pass and lose their patience: it is enough to count the nine cards already added by Piqué. The situation has been very well portrayed by a comment by Arsène Wenger: “Barça plays as a team in crisis; every time he loses the ball it seems that he will award a goal to the counterattack. The team lacks confidence, dynamism and rhythm; It's too individualistic in the last 30 meters. ” Word of the former coach of Arsenal.

Barça is a hybrid set that does not work from midfield forward in addition to not liking running backwards, now very unstructured and uncontrolled, too predictable and boring, unable to synchronize the pass with the reception, the touch with the uncheck, a play that seemed simple and effective to win the Slavia. When two players are needed, and the action does not depend exclusively on Messi, things are not going well in Barça. Rivals have lost respect in both LaLiga and the Champions League.

Some analysts warn of symptoms of decline, a situation similar to that of Rijkaard's times, while Piqué asks for patience – before appealing to the unit – after remembering that in similar circumstances they ended up winning the triplet in 2015. There are also those who conjure up the times of Tata Martino. In the absence of play, there is also no speech: nobody knows how to encourage the Barca fans, probably because of the absence of leadership in the different stages of FC Barcelona.

A revolution whose martyr is a soldier as loyal as Rakitic is a bad joke that forces him to ask about Valverde's role. The feeling is that the technician has to manage a year of transition, a situation that neither he nor the board wanted, and that he accepted with the complicity of some players who now show that they do not know him or sitting on the bench of the Camp Nou . The risk is that the team is consumed if the situation is not remedied very soon: it is necessary to change the routine for the culture of effort and passion, virtues that are very Barça.

Bad when a team seems flawed and loses ambition, victim of structural errors and not only temporary, because then ends up lamenting for what could be and for what will not be, something already known in the Camp Nou. The Barcelona does not leave the waiting room in which it has been for a long time, like the patients who pass from one test to another to discard what they do not have and to guess what makes them suffer; it is known that Messi has a clause that allows him to leave the team in June and that Koeman has another with Holland that enables him to return to Camp Nou in summer.

Confirmation in the North – The Province

Valencia Basket surprises Barça and takes air in the league