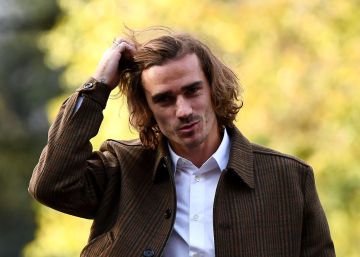 The Barcelona board of directors signed this summer to players such as De Jong and Griezmann to improve the team's game and encourage a hobby dejected by the fall of Anfield. A quarter later, Barcelona continues to be beaten, the coach does not find the starting lineup and football is very scarce, without ambition or greatness FC Barcelona.

The qualification for the knockout stages of the Champions League is still pending the dispute of two very demanding games against Borussia Dortmund and Inter, and the leadership of The league it will not be considered good until Barça-Madrid is played on December 18, after the Barça visit to fields as demanding as those of Atlético and Leganés.

The Barcelona football does not flow, the ball does not run and the conductions are excessive, since there are no clean pass lines and the players do not know how to find their place on the court, all aligned as if they were part of a bar of a football installed in the museum of Camp Nou. From Jong He no longer knows what he has to do to be a transcendent player and Griezmann has not found the “timing” since he left Madrid.

Griezmann He has arrived a year late at Barça. He delayed his signing after setting up a comedy and now it is hard for his teammates to take it seriously and respect him accordingly to a world champion with France. The striker has five games without scoring after giving three assists and scoring four goals, all in LaLiga, two against Betis.

Its incorporation was already quite discussed by analysts because they understood that its natural demarcation is what it occupies Messi. Nor has it been very clear what the coach expects after saying that “life must be sought”, a surprising statement for a team in which the functions are usually marked if the principles of 4-3-3 are respected.

Griezmann is one of the players who makes more kilometers, the striker who stands out the most and also the most interested in convincing Barcelona of his courage and ability to eat at the same table as Messi. The problem is that the Argentine and the French still do not tune, they do not meet, they do not pass the ball and when they do Griezmann does not succeed, as it was seen against Celta.

Griezmann found a goal after Messi's delicious opening. They are not friends, but they are not ignored either; perhaps it seems that among them there is still no chemistry, especially since the French have not deciphered the mysteries of Barça. It reaches to see what Griezmann does when Messi has the ball: most of his movements are not exactly what he expects and wants the 10.

They do not synchronize because Griezmann has not yet mastered Barça's music theory or knows how to play Messi. The speed of the captain and the team, which lately plays foot, are different from that of the Frenchman, a footballer who stings very well into space, technically good, accustomed to marking the differences in the Real society and Atlético.

Just remember what Henry said when he was interviewed for the documentary Take the ball, pass the ball, dedicated to Barça. "At 30 I had to learn to play football," said the striker when asked about his stage at the Camp Nou. The same thing could happen to Griezmann, as Miguel Rico already told Mundo Deportivo.

The timing of Griezmann is not matched with that of Barça. And as long as they are missing, many French stories will be explained, such as that their way of being also costs to be accepted in the dressing room, especially for being so flirtatious, very aware of their way of dressing and combing their hair, capable of throwing confetti in the stands to celebrate his second goal against Betis.

Some people call him the "posturitas". Do not forget that the most veteran players of Barça were willing to postpone the collection of their chips so that Neymar return. This is what Piqué said. Maybe someone still awaits you and entertains you while with Griezmann. After all, there is a kind of curse against those who try to replace Neymar.

Coutinho He had to go to Bayern Munich, it is not clear what will happen to Dembélé and it will be seen how things take to Griezmann. Although the challenge is great for a team that has renounced pure extremes in favor of the trident, it is known that Griezmann has always had his way after having to leave his village because they ignored him in France.

Real Madrid: They try to rob Mariano when they leave a luxury store in Madrid

The praise of McGregor to Donald Trump that revolutionize networks

The EPIC Gran Canaria raises the list in its third edition, which takes place in February – La Provincia