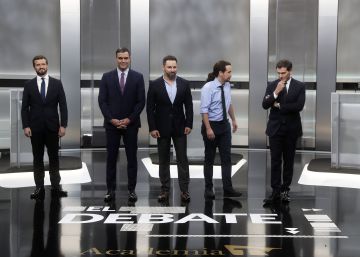 Other election campaign and the parties have not moved a millimeter. The light at the end of the tunnel of ungovernability seems another train that comes to overwhelm us. The debate of the candidates in economic key was disappointing once again. In April, everyone promised tax cuts or spending increases. In November, employment has slowed, although the October Social Security affiliations increased more than expected and are a relief after the summer data. Public revenues grow by half than at the end of 2018. But the parties again make the same promises of tax cuts or increased expenses.

In 2015 Mariano Rajoy breached the Stability Pact and Spain was threatened with sanction. His friends of the European PP who controlled the Commission gave him two more years to make adjustments. Rajoy in those two years did what he does best, that is nothing. In 2019 Pedro Sánchez has sent a budget plan for 2020 saying he has been unable to approve budgets and cannot do anything. The public debt has increased again in 2019 and still close to 100% of GDP.

80% of the measures proposed by the parties in the campaign would lead us to further increase the deficit and debt. And the other 20% sound good in the headlines but the devil is always in the details. When Sanchez talks about fighting the climate emergency, would it mean closing the polluting car industry? One of the containment pillars of the Spanish economy would fall.
When Casado says he is going to replicate what Aznar did, does he propose to mount another real estate bubble? Spain would have to pay its public debt and cause a deep depression putting our membership in the euro at risk. Or when he says he will do the same thing as Rajoy, does he propose to double the 18,000 million hole that was generated in the public pension system from 2011 to 2017? That would force a brutal cut in pensions.

A German president of the European Commission, from Angela Merkel's party, has proposed a sustainable investment plan. The former president of the Commission and the ECB have been asking for it for years. This plan would compensate for the weakness of European exports and reduce the unemployment rate. Spain is at the limit of the 3% deficit limit and needs these investments not to be included in the excessive deficit protocol. Public buildings could be filled with photovoltaic panels, create thousands of jobs and reduce polluting emissions.

This demand policy must be accompanied by industrial and technological policy so that GDP and employment are generated in Europe or we will be financing technological development in China. The future of electric mobility, the circular economy and artificial intelligence should be made in Europe Y made in Spain. Did you hear any of these proposals in the candidates debate this week? Complicated, none spoke of science, technology or innovation.

The Generalitat defends its data on the pandemic: “Maybe we will inform more”