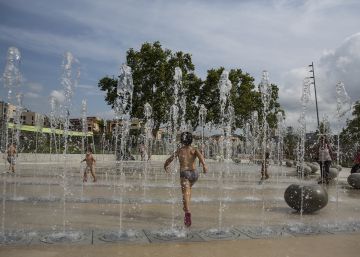 This article may be reading in a pool. Perhaps a funny swimmer will approach you and while he is absorbed in his reading, I will splash him with a water gun. If you are near the gun, you will have received a jet, and if it was far away, it will have been a few drops. At what point does the body of water pass from one form to another? Why does a water jet decide to split into spherical droplets? Why don't cubic or polyhedral drops form? The jet breaks in search of a state of minimum energy, and it turns out that the sphere is the configuration that, for a given volume, has minimal surface. In the case of water, energy is associated with surface tension forces, introduced by Simon Laplace and Thomas Young at the beginning of the 19th century, and which make for example that a needle carefully placed on water does not sink. And this energy is proportional to the area that encloses the fluid. The smaller the area, the less energy.

But how do you pass from the cylindrical jet to the drops? This transition implies the disconnection of the latter through a somewhat traumatic process in which geometric quantities, such as curvature, and physical quantities, such as fluid velocity, grow enormously. When the disconnection occurs, a singularity. The nature of this singularity could only be described in 1993, through a combination of analytical and numerical techniques. The careful mathematical analysis of the singularities is of great help to the understanding of the phenomenon, since the numerical methods that are used in a generalized way to solve the problems of fluid mechanics, fail or cease to be reliable in them.

These issues have reached great interest in recent times due to the appearance of “printed electronics” techniques, with which to produce devices, such as screens and solar cells, flexible and very low cost. The main idea is to build the elements of the electrical circuit by the deposition of drops, which are separated from jets produced by small ejectors. It is necessary to know and control the processes described above to produce drops of the precise size and, above all, to avoid the appearance of sequences of droplets of undesired sizes, called satellite drops, which are quite common in fluid mechanics. The satellite drops are often presented in iterated structures, that is, each satellite is surrounded by smaller sub-satellites, which in turn have their own sub-satellites, similar to those of a fractal structure set, the so-called Cantor set. Last year we proposed an explanation of the natural tendency towards generation of said structures, with a view to their deletion in applications.

Once the drops reach the surface to be printed, their kinetic energy is used to extend them parallel to the surface, where they are deposited occupying a certain region. It is essential to know the size and shape of it, in terms of the velocity of the drop, fluid viscosity, etc. The process of collision with the surface again involves the formation of singularities, associated with the abrupt change in the direction of the velocity of the droplet particles. In 2010, after enormous theoretical, numerical and experimental efforts, they were achieved closed formulas to determine the size and shape of the drop. One of the most curious applications of these formulas is in forensic science: today it is possible to determine details such as the location and position of the victim of a crime from the form of blood splatters.

Let's go back to flexible screens. Finally, the drop deposited is dried by evaporation. Normally, the drops carry active materials (semiconductors, for example) in solution. One would like that when the drop dries, these materials are distributed in the most homogeneous way possible to avoid imperfections that affect the performance of the device. Normally, this is not the case, due to problem called "coffee stain": When the drop dries, the particles tend to concentrate on the edge forming a characteristic ring, which anyone can observe spilling a little of their next coffee. Again, this has to do with singularities that are generated at the edge that cause a very high flow of particles to it. The knowledge and control of the phenomenon, with a view to avoiding it, is another very active area of ​​research at the moment.

This small succession of dramas, in the form of singularities, through which gout goes through illustrates quite well the work in applied mathematics: starting from real-world problems, we use the analytical and numerical artillery at our disposal to provide information, techniques and methods that They can help to understand the phenomena involved. In this interaction between mathematics and applications, continuous contact with engineers and experimentalists is essential, apart from giving clues to theoretical studies and suggesting questions of interest, they allow us to contrast our conclusions with what happens in reality and thus refine and improve Mathematical models