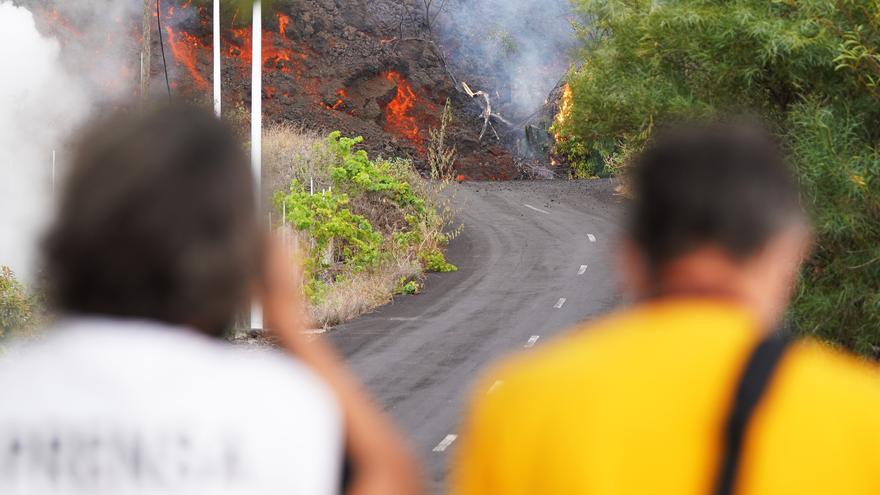 Between the visual spectacle and the scientific fascination for a historical eruption, lives marked by the volcano emerge. It still has no name, but at the home of Floricela Rodríguez, a 54-year-old palm tree, they will not forget the day the earth opened up to expel incandescent magma through seven – then eight, nine, now – mouths. Living in Madrid for three decades, she used to visit her father, a very old and dependent man, five or six times a year. But in the last month his life has been put on edge twice.

The first, with the fire declared in El Paso in August. He evacuated the father by his means, both of them frightened by the dense cloud of smoke. Floricela hurriedly packs her bags again just 30 days later. Lava has taken the house ahead of the father’s caregiver and hers, in the Llanos de Aridane, has been just five kilometers from the magma tongue.

“2020 had been a fatal year, but 2021 is winning the battle,” he says on the other end of the phone, with the sound of Canarian television in the background. Rodríguez has been open for almost 72 hours with all the official information windows. “I need to see what happens, locate through images where the lava is going, what houses it has arrived at. I have left work here and caught a quick flight, on Wednesday I will be there,” says this lawyer, who works as a freelancer.

The volcanoes go with La Palma trees. They are part of their identity and the eruption is a possible catastrophe, although 50 years to this part, a period of seismic tranquility, they had almost forgotten it. “We are quite resilient, we have no other. The volcanoes go with us, but it had been so long since the last one … It is a sad sight,” says Florencia.

6,000 people have already been evacuated from their homes in the municipalities of El Paso, Los Llanos de Aridane and Tazacorte. The Canarian Government calculated that the magma would touch the water on Monday night, but the lava tongue moves slowly. Experts who X-ray the eruption on the ground do not know how long it can last. The volcano has entered a new phase, more explosive – not more dangerous – on the afternoon of Tuesday, Monday. The coastal areas of Puerto Naos and El Remo, the first to be evacuated, have been isolated by the disappearance of parts of the road that connect them.

Although no human losses have been regretted, the material damage has yet to be quantified and will continue to grow as the days go by. At least 166 homes have been buried under lava –An unrecoverable terrain in the following dozens of years–, although official data has not yet been offered on how many crops the magma or dead animals have destroyed because the rescue did not arrive in time. The Civil Guard has participated in specific tasks since Monday and there are images of agents putting the cattle to safety.

“For two days I have been with anguish and sadness for the people I know who are going to lose everything. We have been touched closely by the person who cares for my father. He does not stop crying, they have gotten into a caravan,” explains Rodríguez . He has advanced the salary of the month to the woman. “He did not want to tell me but he had been wearing it for several days,” he adds.

In La Palma, there is also the problem that people build outside the regulations and there are houses that do not appear in the general plan and that are not insured, explains Florencia. Crops are added to that. On the island a part of La Palma trees are cooperative members and participate in the cultivation and commercialization of bananas, with a Canarian denomination of origin.

Floricela and her family have a piece of land dedicated to bananas that is threatened by the advance of magma. What worries his cooperative most, however, now is that the lava will bury the plant where the fruit is taken for export. From Tazacorte to Fuencaliente greenhouses and open-air plantations take over the entire landscape close to the coast. The weekly production reaches 400,000 kilos of bananas per week. To the Peninsula, the main market, around 7,000 tons per week are shipped on average.

The opening of new mouths in the volcano on Monday forced the emergency services to evacuate new neighborhoods of El Paso, such as Tacande. “You are never sure if you are safe. We are in volcanic terrain and the magma we do not know where else it can come out“assumes Floricela.

The eruption has reawakened among the inhabitants an old theory, dismantled, that an active volcano would split the island in two and have effects on the US coast. “This theory is going around in everyone’s head and we are trying not to be alarmed. It is not true, but that increased insurance in Florida in the face of the threat of a tsunami,” he says.

What is certain is that the volcano will leave unavoidable effects, terrain that is impossible to rebuild, and forcibly displaced people. People who will have to change neighborhood, town, perhaps island. The possible management, that of the aid, will be clarified in the coming weeks. The President of the Government, Pedro Sánchez, insisted during his visit to the island that no one will be financially damaged by the consequences of the eruption and anticipated the possibility of requalifying land to accelerate recovery.