Archive image of the transfer of the first copy of the archive to the Ministry of Culture. / C7

«Library doctor power Arizmendi secured. Stop». It is August 1940, a year after the Civil War ended, the Nazis have just invaded France and a handful of officials of the Republic in exile have managed to put Juan Negrín's archive out of reach of the Gestapo (and Franco). ; a brief mention in a telegram confirms it.

Nine years after transfer
from Paris to Las Palmas de Gran Canaria from the file of the republican leader, the Negrín family recount how the thousands of documents that complete a fundamental part of the history of Spain during the Second Republic and the War were saved, and that numerous historians persecuted for decades, when
his existence was just a rumor that no one confirmed.

Although they had already referred on occasion to individual episodes of how the archive survived two wars (the Spanish and the world), for the first time the family reveals the complete journey that they followed from when they crossed the Pyrenees border in 1939 until they one day
Carmen Negrin allowed the American historian
gabriel jackson (1921-2019) go down to the Paris basement where it was kept and open the boxes that no one had touched for almost half a century.

The politician's granddaughter now recounts all the details of the intra-history of the archive and the family's reasons for keeping it hidden in a magazine from the Complutense University, "Documentation of Information Sciences", in an article that she signs together with the historian José Medina, president of the foundation that safeguards the personal legacy of Juan Negrín. 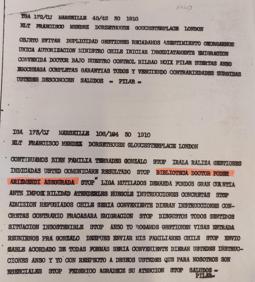 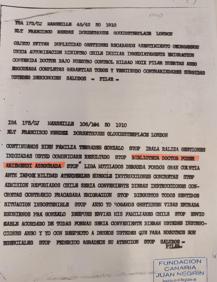 In the middle of the war

Carmen Negrín and José Medina explain that,
in the last months of the warthe Negrín archive followed in the footsteps of the Government: first he went to Valencia, then to Barcelona and, finally, to La Vayol (Girona), to a talc mine called "Canta" in Alto Ampurdán, conditioned to protect the assets of the Republic.

With the evacuation of Barcelona (January 1939), the Negrín archive traveled to Toulouse, at the service of the Government in exile in the last months of the Civil War. In September of that same year, France and the United Kingdom declared war on Germany for the invasion of Poland, but
the Gallic Army did not take long to capitulate and Negrín and his collaborators prepare to flee from Paris to London.

«We left Paris at dawn on June 12 (1940), Paris-Tours, Tours-Bordeaux, the same stops as the French Government... it took us four days... everything I tell you is pale compared to reality , our departure from Spain has become small, ”writes Feli López, Negrín’s partner, in a letter.

The Negrins arrive in London, but
the archive stays behind, in Toulouse, in occupied France, and no one knows what has become of him... until the Republican Minister of Finance in exile, Francisco Méndez Aspe, receives this telegram in the British capital in August 1940: «We continue well (.. .) Stop Irala carries out the indicated steps, you will communicate the result Stop. Library doctor power Arizmendi secured Stop (...) Regards Pilar».

It is
Pilar Lubián, official of the Ministry of Financeresponsible for managing the economic resources of the Spanish Refugee Evacuation Service (SERE), which communicates to his superiors that the library (and archive) of Juan Negrín are safe with an officer from the Police Corps, José de Arizmendi, who it is located in Marseilles, in still «free France».

There, Arizmendi makes a decision that will ultimately save the file: he asks for help from
Gilberto Bosques, the consul of Mexico in Vichy France, a character who is compared in his country to Óskar Schindler, because his visas saved the lives of more than 400 Jews (in addition to countless Spanish exiles). Arizmendi tells him that the boxes he entrusts to him contain only "books", so as not to compromise him, and together they keep them in a warehouse in Marseille.

Arizmendi manages to escape to Mexico, but Lubián is arrested as a member of the French Resistance and
ends up in a Ravensbrück concentration camp (which he survived) and Bosques is also arrested and transferred by the Nazis to a prison in Germany. And the thread of the archive is lost, until the end of the World War.

Already in November 1945, Negrín wrote from Mexico City to the Secretary of Relations of the Aztec country,
Francisco Castillo Najerato tell him about "his personal library", about the adventures he has been through, about the help of Consul Bosques, about the Marseille deposit... And he asks him to help him recover his books, again avoiding any mention that engages Mexico in a custody of documents that would have contravened international law.

In the draft of that letter, which is kept at the Foundation's headquarters in Gran Canaria, Negrín himself explains the reason for the flight from the Toulouse archive to Marseille:
prevent it from falling into the hands of the Gestapo,
the German secret police, and the Franco governmentwhich at that time was still persecuting the exiled Spaniards.

The library and the archive eventually end up in Negrín's house in Paris, in a basement, where his partner, Feli López, first, and his granddaughter Carmen Negrín, later, kept them.

Historians such as Juan Marichal, Ricardo Miralles or Manuel Tuñón de Lara
they searched for the file, without successand Gabriel Jackson and Ángel Viñas tried to convince Juan Negrín Jr. to allow them to consult him, but they met with a strong refusal.

Carmen Negrín explains in this article why: the family had already delivered to the Franco Government, fulfilling Juan Negrín's wish, the documents on the gold from the Bank of Spain sent to Moscow for
pay for the war material of the Republic and was scalded. «The misrepresentation of the gold papers made a dent in the family and explains the prolonged silence; they wanted to safeguard the memory of Juan Negrín”, writes