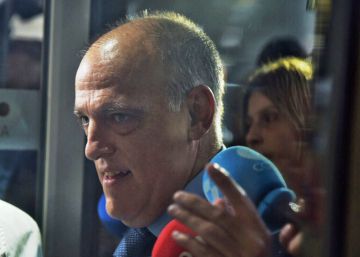 Javier Tebas has ratified this Thursday in his statement at the trial by the supposed size of the Levante-Zaragoza of 2011: According to the current president of LaLiga, Zaragoza bought Levante players to let themselves be won (the duel ended 1-2) in the decisive match that faced them on May 21, 2011 at the Ciutat de València stadium. According to Thebes, this was what a player from the Aragonese club told him and other people linked to the world of football warned him. Thebes was then vice president of the League and was a lawyer. But Thebes has gone further in his statement in the first trial held in Spain for the alleged size of a First party. According to the president of the LaLiga the question did not surprise him "because in the end of the season, to go down to Second or go up to First they were quite chaotic in this regard." That is, the arrangement of parties was frequent. Or that at least that was the persistent “runrún” extended in the world of football. Part of his work, then as vice president of the employer's office, consisted, in counting, of calling on the phone the top leaders of the teams that were supposed to let themselves win to warn them of what they had told him. Until 2010 the arrangement of parties was not even expressly contemplated in the Criminal Code and its regular public complaints fell in a broken coat, he lamented: "There has always been a fairly passive attitude in this regard."

The president of LaLiga was the impeller six years ago of the investigation of the Levante Zaragoza party – in which the Aragonese club played the descent to Segunda, which it avoided with a victory by 1 to 2, with which the Deportivo descended. A case for which now three managers of Zaragoza are being judged in Valencia, the entity itself, its technical staff and the 18 players summoned that day by both teams. In total, 41 individuals, who face sentences of between two and four years in jail, and a legal entity, Zaragoza.

Tebas has detailed that the first notice he received from the adjustment was given by Augusto César Lendoiro, then president of Deportivo de la Coruña, a club that also played the descent that Saturday of 2011 -and descended-. Lendoiro told him that, according to a player of his team, Sergio González, now coach of Valladolid, Zaragoza was going to buy the decisive match to secure the victory. Thebes then called the president of the Levant, Quico Catalán, to communicate the matter and ask him to try to prevent it.

The following testimony, in this direct case, he received, according to Thebes, months later, in his law firm, where a Zaragoza player, at the time in a situation of bankruptcy, had come for another matter. He approached him to ask him about the issue and the soccer player honestly admitted the arrangement: "He told me:: I'm tired of this, I have a lot of pressure." I told him to report it. But he replied that it was impossible. That if he did he would be considered a sneak in all the locker rooms and would not play again. He asked me to submit the complaint, to keep his name and not tell any information that could reveal his identity. ”

The most relevant of that point of the accusation of Thebes, on which the case is based largely, is that according to the president of LaLiga the Zaragoza player told him the system allegedly used to commit fraud: the Aragonese club had made a transfer to a group of Zaragoza players, around 100,000 euros to each, they had withdrawn in cash and handed it to Ballesteros, a Levante player, who had distributed it with his teammates. And that version coincides with what the judicial investigation has revealed: the club transferred a total of 965,000 euros in successive transfers, of unclear justification, shortly before the game, to nine members of its squad, to its sports director and coach, these extracted the money almost immediately and in the following months the accounts of the Levante players experienced a strange lack of activity, which only seems compatible with the hypothesis that they had abundant amounts in cash.

The third source that spoke to Tebas about being was, according to his testimony this Thursday, Fernando Roig Nogueroles, son of the owner of Villarreal and director of the entity, a year later. The Castellon club played the descent then, also with Zaragoza. And Roig called him "worried" because a player of his squad, Javi Venta, had told him that Zaragoza "bought games." Venta knew it firsthand because he had received 35,000 euros for letting himself win a year earlier when he was in the Levant, as Tebas said Roig told him. Javi Venta is today one of the defendants in the trial.

Thebes has said that in that season, 2011-2012, the next to the alleged adjustment being judged, there was a strong rumor that the Aragonese club had bought from its rivals Getafe and Racing de Santander. And he has maintained that Antonio Prieto, former sports director of Zaragoza and now accused, was known in the football world for being in charge of “intermediary in the purchase of games in the clubs where he was”.

Zaragoza: Raphael Dwamena is operated from the heart with the hope of returning to football

Osasuna: The former players of Betis deny having received money from the former leaders of Osasuna