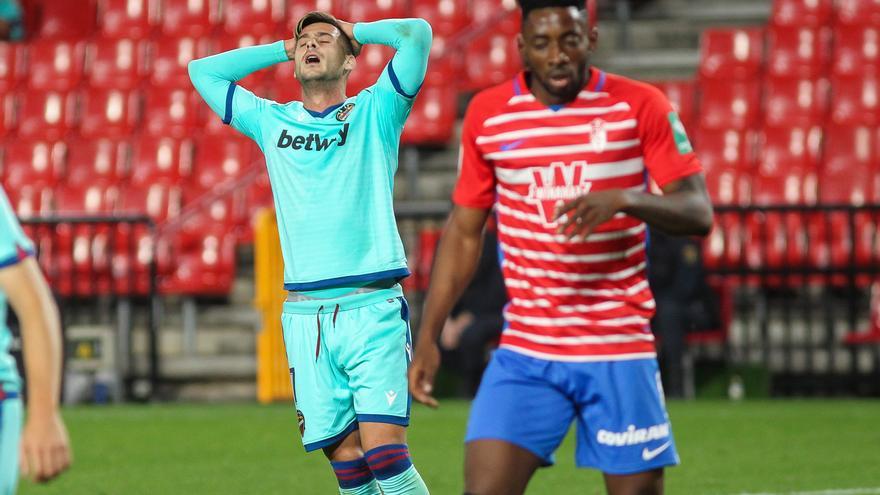 Granada and Levante tied (1-1) this Sunday at the Nuevo Los Cármenes Stadium, a result that makes the Andalusians lose their first points this season at home and that causes the Valencians to accumulate five games in a row without winning and continue in relegation positions.

The expulsion with a direct red from French Maxime Gonalons at a quarter of an hour marked a clash in which the Pomegranate with an early goal by the Venezuelan Darwin Machís and the Portuguese Rubén Vezo tied for a Levantine team that had a lot of ball possession but little clarity to break the defense in inferiority of the rojiblancos.

Granada, which started with Jesus Vallejo on the right side due to injury problems in that position, he scored 1-0 in the first dangerous action of the crash, a great individual play by Machís that beat Aitor Fernández with a hard right hand.

Levante, who could not count on in the end José Campaña Due to some last minute muscle discomfort, he was trying to react from the possession of the ball when the play that marked the match arrived at a quarter of an hour.

A Gonalons hard tackle on Rochina was punished by the Aragonese Jaime Latre with yellow cardboard, although the referee changed the color of the card after reviewing the action on the monitor at the request of the VAR and decided to expel the Frenchman with a direct red.

From there, Levante turned on the goal of an Atletico team that defended itself close to its frame but with a certain order, although they enjoyed good chances to tie Rochina, Macedonian Enis Bardhi and Jorge Miramón.

The equalizer came in minute 34 on a corner kick bounced to perfection by Bardhi for a powerful header from Vezo.

The local reply, also from set pieces, was signed by Antonio Puertas against Aitor Fernández who prevented Granada from taking the lead again before the break.

Levante also dominated in the second half, forcing the Portuguese Rui Silva to avoid the comeback with outstanding interventions against a far shot from Bardhi and another much closer from Roger Martí.

Granada, despite the inferiority, held up well on the basis of discipline and sacrifice the stakes of the visitors, who could not break the local defensive fence and did not create any more scoring chances until the end.

Incidents: Match of the eighth day of The league Santander played at the Nuevo Los Cármenes Stadium behind closed doors.

They propose to fine Valencia with 2.36 million euros