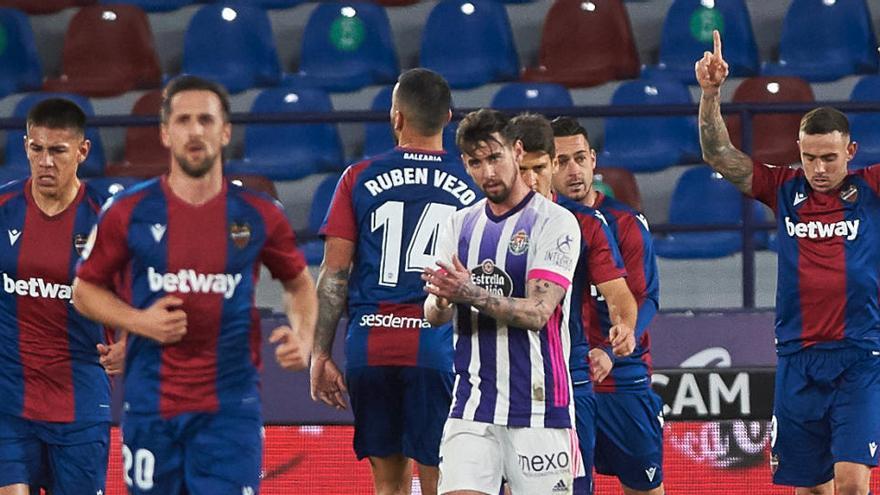 The alternatives of the second half led to a two-point draw between the I raised and the Valladolid, which reflects the development of the game between two teams that sought the victory and that remained with the bittersweet feeling of not having achieved it2-2).

The first half, poor in quality, was level, but after the break, Levante grew more than Valladolid and he frequently approached the pucelana goal, something he had not achieved until then.

Football during the first minutes was put by Valladolid, with a lot of ball possession and a clear goal option wasted by Alcaraz, who finished off a good service from Orellana.

After a quarter of an hour of play, the forces leveled off because Levante got a ball that they had barely managed to have until then and started playing, with penetrations on the wings, very close to Masip’s goal, although without generating options for danger.

The match had no emotion in the first half, since the alternatives of possession on the part of both groups almost never ended near the areas. The ball was thrown many times towards the rival field with long displacements, especially by the locals.

Thus, it was very difficult for danger to surround the goals of Aitor Fernández and Masip, who barely had to intervene in a first half of clear superiority of the defenses against impotent attacks because the ball did not reach them and because when it did, the rivals they impeded any movement.

Only a header from Orellana shortly before the break can be considered a second goal option in the first period for Valladolid, who also had the first of the second half in a shot from Alcaraz that came out near a goal post Levantine.

Little by little, Levante improved and had more arrival, especially in the penetrations of Clerc on the left wing, but the goal options were still not present in the match, while Sergio González’s team was more conservative against an opponent who was getting closer and closer to his plot. .

The improvement of Levante was reflected almost immediately on the scoreboard with a gallop by the band of De Frutos, who gave Dani Gómez to open the scoring. After the goal, Valladolid did not react to the team of Paco López, who maintained control of the game with a game of constant attacks.

However, in an isolated action, when Valladolid had the most problems, a steal of the ball allowed Alcaraz, in a distant and placed shot, to establish the tie and shortly after, a new attack by the Castilian team pI use the 1-2 on the scoreboard after a good attack that Óscar Plano resolved.

Levante was activated and as the match approached its conclusion, Roger established a 2-2 just based on the merits of one and the other.

Incidents: Game played without an audience at the Ciutat de València stadium.