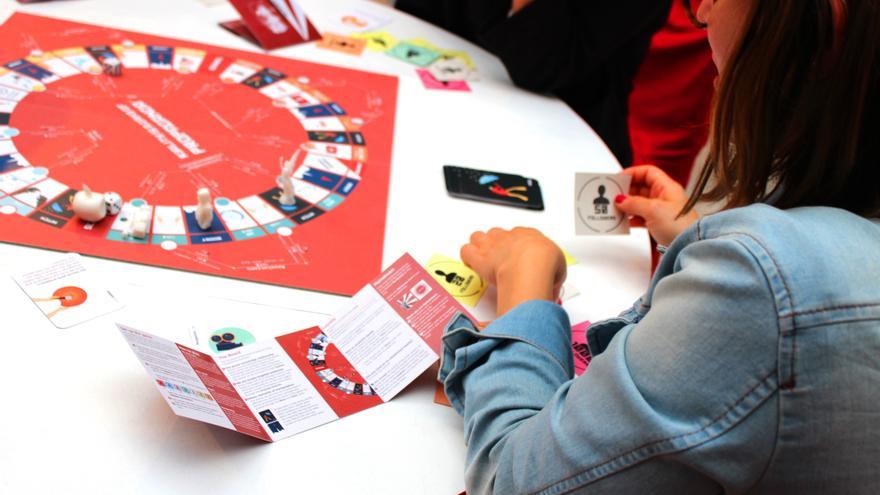 Just before the pandemic started and the mass demonstration sounded weird, the account @OhMyLoving posted on Twitter a humorous comment that ironized one of the most recognizable activist rituals of the last 30 years: “The batucada is a tool of the system. It has been designed from high places to: 1. Make communication between protesters difficult. 2. Block your own mental thread. 3. Make us remember Safri Duo, thereby generating a melancholy that incapacitates us for the fight ”.

Beyond the joke, the truth is that activism has been taking many forms for several years at different scales and contexts. While the strike or the demonstration remain classic but indispensable tools of protest, in recent years we have seen activism make the leap towards playful formats to combine political reflection and fun. This is how many board games have been born in recent years: using the Internet as a platform to generate community and often financing themselves independently through micro-donations.

"Chronicles of the Outbreak is a game that was born in the context of the social protests that began in October of last year in Chile. On October 18, 2019, the so-called biggest social outbreak in the recent history of our country began ”. It counts Simon Weinstein, Member of Fractal Games, the small publisher and distributor of board games in Chile that has produced Crónicas del Estallido: a free card game intended to be printed and played at home that reflects on how Chilean society reacted socially and politically to the consequences of the Pinochet dictatorship. A game that connects therefore to the historic change of Constitution some days ago.

Weinsten acknowledges that the commercial part is secondary in this case: "Every cultural or artistic product has a political charge behind it. In Crónicas del Explollido we decided to make that decision public, assuming that it could bring us a commercial cost." In fact, the objective The game is openly social: "The game is inspired by a concept of social memory. Assuming that social memory is a concept related to subjectivities and power. Who writes the story? Who decides what things we will remember?"

In Chronicles of the Blast each card contains an event, with the date it occurred and a brief description. Another of the most common trends in this type of game also occurs here: a community welcomes the game and even participates in it: “As we wanted it to be an appropriate game, there was no time to fully take care of the illustrations, so we made the decision to open to people outside of Fractal Games the possibility of illustrating one or more cards. That decision was very important in what would happen to the game, since somehow the project began to take on a life of its own, causing great interest among well-known artists and amateurs alike ”.

The Chilean publisher has other similar games that go along these lines: “Hidden Memory is a game designed exclusively for classroom use, which has been developed together with the Museum of Memory and Human Rights of Chile and Goethe Institut. OR Corruptia: a strategic game that ironic about the representatives in parliament and their questionable way of working.

"Propaganda”Is a board game created as a final degree project at the University of London by the Albanian designer, documentarian and game creator Sindi Breshansi. “I initially started the game in 2017. That era was called post-truth, after the Trump and Brexit campaigns were based on feelings being more important than facts. Led by Evgeny Morozov, the conversations about the power of social media had only just begun, as for the first time we could see that the mechanisms that were built to unite us were now dividing us. I remember once thinking to myself: "How do you know that what you know is real?"

"Propaganda" is not an industrial game. In fact, it is completely mediated by the experience of Breshansi, who although now resides and works in London, was born in Albania: “Actually, this question arose from a deep concern for the reality that has accompanied me throughout my upbringing in Albania . Albania used to be a dictatorship and the memories of my parents, like building bunkers for a fictional enemy that never came, always haunted me ”. The game has just been nominated in several categories of the INDICADE, the California Independent Games Festival.

In Spain we have not been oblivious to this trend. A look at the category 'Games' financed through the Verkami crowdfunding platform gives us clues to the number of games that are being financed through small donations. In recent years, many independent and community projects have broken out, in many cases demonstrating the need to combine activism and play.

The feminist podcast Fuchsia Blood He asked four years ago for 4,000 euros to be able to carry out a feminist Trivia: he managed to raise more than 70,000 and created Reunited Feminisms. The game has now been three editions and there are a total of 7,500 copies distributed in homes and bookstores. Brick He also asked for 5,000 euros and ended up raising more than 36,000 on the same platform to carry out a card game that jokes about the real estate bubble in the Spanish state. OR Ruiz!, a card game based on the rhetorical style of Mariano Rajoy, also successfully funded through a micro-donation campaign.

"In 2016 I was already a big fan of Mariano Rajoy Brey's phrases to the point that I had hang up some t-shirt design with some of them and, surely helped by my dyslexia, one day I woke up with the idea of ​​making a deck of cards that would allow the random mixing of Mariano Rajoy's phrases; That same day I made the first prototype on pieces of paper and I immediately realized that there was play ”, he declares José Félix Gléz. Saint Sebastian, creator of the game along with David Egaña.

For the creators of this game it is clear that there is a trend: "In any type of format or medium, the conjunction between humor and politics is experiencing a great boom (...)" Troika "," El Ladrillazo "," Crisis ", "Secret Hitler" or "War On Terror" are examples that board games can also be a support for the transmission of ideas and lead us to reflect on the world around us, "says San Sebastián. The third edition of ¡Ruiz! has just come to light so as not to let the tragicomic fall into oblivion Marian grammar.

“I can't help wondering if we don't function with a very testosteronic and Calvinist concept of politics, which thinks that to do politics you have to suffer. From the ranks of the most classic activism, they often reject other forms of action or protest more linked to the ludic, ”the journalist and researcher wrote recently. Macarena Hernandez in a text entitled "Politics is a serious thing”. And it is that political board games are fun, and very serious.