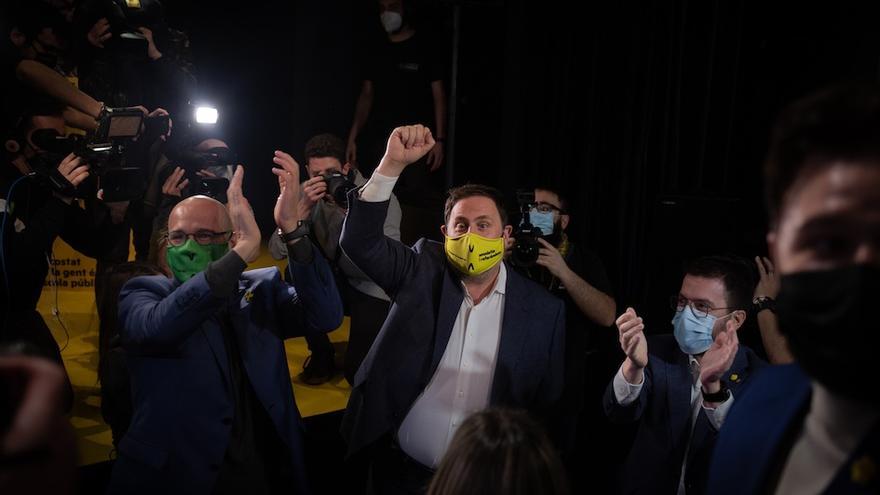 The leader of ERC, Oriol Junqueras, has once again starred in an electoral act this Friday, after three years and two months without being able to get on stage due to being in prison. He has done it in Badalona, ​​where his party celebrated the first act of its agenda after giving the starting gun. The formation was not clear when it designed the campaign agenda if the former vice president could join this first appointment, but the release of all the prisoners this Friday morning, thanks to the third degree granted by Penitentiary Institutions to all of them, has allowed Junqueras or Raül Romeva have accompanied the Republicans, as well as Jordi Turull and Josep Rull have done the same at the event held by Junts in the city of Reus.

“They do not like us to talk,” Junqueras began, who assured that at the same moment that he stepped on the stage “they are doing everything possible to close us again because they are afraid of us.” The ERC leader has shown the most conciliatory facet and has summoned Companys to ensure that after their time in prison they return “with a spirit of reparation and justice.” “We do not come with bad words or with reproaches, not even when they imprison us, because we have another job, because we love this country and the people,” he assured his people in a small-format act as imposed by security measures. for the pandemic.

Junqueras has asked his supporters to vote on February 14, also thinking of the prisoners. “We do not give the pleasure to people who do not want the people or justice. We do not give them the pleasure of believing that they can win because they lock us up,” he said, after stating that “if these elections are not won by ERC, it will be Catalunya who will lose “. He has also had veiled words against his Junts partners. “We know”, said the leader of Esquerra, “that it is much more useful to be more and more than to be more and more pure but less.”

The former vice president has insisted on praising his formation as the “closest to the people” and the most capable of making social policies. “We know, because the prison is also a good place to do it, that there are many people who suffer. For health, economic reasons, because they have been left without work or because despite being in an ERTE they do not receive the money they have. There are those who suffer because they do not have a decent home or because they have a precarious employment situation. We know this because we look like people, “he assured.

Like the leader, the imprisoned ex-minister Raül Romeva has also referred to his prison situation. “We do not know how much we can continue to enjoy these microphones but you know that we will take advantage of them. There are those who are afraid that we will use them,” said Romeva, who has declared himself “higher than ever.”

Aragonès also declared himself the continuation of the work of Junqueras. “Whenever one of us is imprisoned, there must be someone on the side willing to take over the momentary relief, willing to continue and be one more link in this chain of the republican left of Catalonia,” he said. “There is no repression that can break this chain,” he pointed out, which is why he called for “building a republic of rights and freedoms, through the two great consensuses of amnesty and self-determination.”

ERC leader in Congress, Gabriel Rufián, has also taken the floor at the Badalona event and, like Aragonès, has shot darts at his main rival, the former Minister of Health. “The PSC is the Sanchista Party of Catalunya”, has launched Rufián in a humorous tone. “The solution is not a candidate that is an” effect “. They call it the” Illa effect “, like a yogurt that expires. Drink the juice that runs out of vitamins. Vote for Illa before February that if it does not disappear”, Rufián has ironized.

However, the main criticisms of the deputy in Congress have been for his rivals from Junts, against whom he has charged for their reluctance to the pacts in Madrid. “I have two news, one bad and one good. The bad news is that this will be the most complex campaign we have ever done because we are facing people who have won so much that they think the country is theirs. And that is why we have to beat them. The good news is that we have already beaten them before, “he said, citing a few electoral appointments in which ERC came first, such as the two general or the last municipal ones.

Turull and Rull, in Reus

Two other prisoners, Jordi Turull and Josep Rull, have also campaigned with their party this Friday, in this case at the event that Junts has held in the city of Reus. “Despite the threats from the Prosecutor’s Office and the State, who want us on our knees and surrendered, we are standing here. It is not our own merit, it is thanks to so many people who have not stopped giving us strength, courage and hope within from jail, “proclaimed ex-minister Turull, in an emotional tone. The jailed politician has assured in the act that despite “the adversities and the repression”, they “have not allowed themselves to fall into resignation.”

For this reason, Turull has claimed to “democratically overwhelm” the State in the next elections. “It is an opportunity for those who want us devastated to be democratically overwhelmed,” said the former minister, who has called his own to vote so that “millions of little ants with ballots” can “knock down the state elephant, disguised with a toga “.

Josep Rull has expressed himself in the same sense, who has reaffirmed his political convictions despite being in prison. “We are never going to give up on the challenge of leaving our children a better country,” he said. For Rull, Junts’ candidacy in the next elections is a “huge wave of hope.”