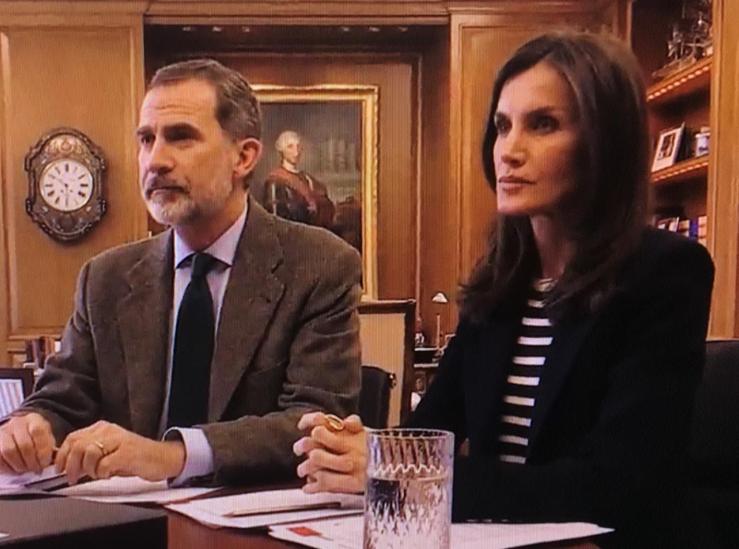 The Queen Letizia that for the past fifteen days has been keeping quarantine despite having been negative in the coronavirus test, it has appeared today for the first time with the King while both had a video conference with the president of Mercadona, Juan Roig to be interested in logistics in the supply of food and basic necessities.

Since her confinement in her residence in the Zarzuela complex, Letizia has established telephone contact with various social sectors, complementing the follow-up that the King has been carrying out. Letizia contacted the heads of some hospitals, as well as representatives of the Spanish Association Against Cancer, the Spanish Federation of Rare Diseases, the Drug Aid Foundation. This same morning he was in contact with the president of Unicef ​​and with the director of the Disability Board. All the groups have sent him their problems aggravated by the health crisis. He spoke to the respon

Accompanied by his management team, Roig has expressed his pride for the work and effort of the 90,000 Mercadona workers. The President highlighted the value of the agrifood chain, in which 2.5 million people (farmers, ranchers, transporters and industry) work daily, to supply businesses with the necessary products daily. In addition, Roig has stressed that it is very important that the economy does not stop, but always guaranteeing the safety and health of workers. The Mercadona president has finally pointed out that Spanish society has an obligation to create the necessary economic and social conditions so that the country can take off as quickly as possible when the epidemic ends.

Before the videoconference with the president of Mercadona, the King also had videoconference contact with the President of the Galician Federation of Fishermen’s Associations, José Antonio Pérez Sieira, to know the impact of COVID-19 in the sector of the fishing, considered an essential productive activity and that in Galicia alone it encompasses 40,000 direct jobs, which process 70 percent of fresh fish in Spain and 84 percent of Spanish production. In the conversation, the president of the Galician brotherhoods has expressed his concern about the difficulties that the inshore fishing sector has especially to comply with the protection measures against the virus in small boats