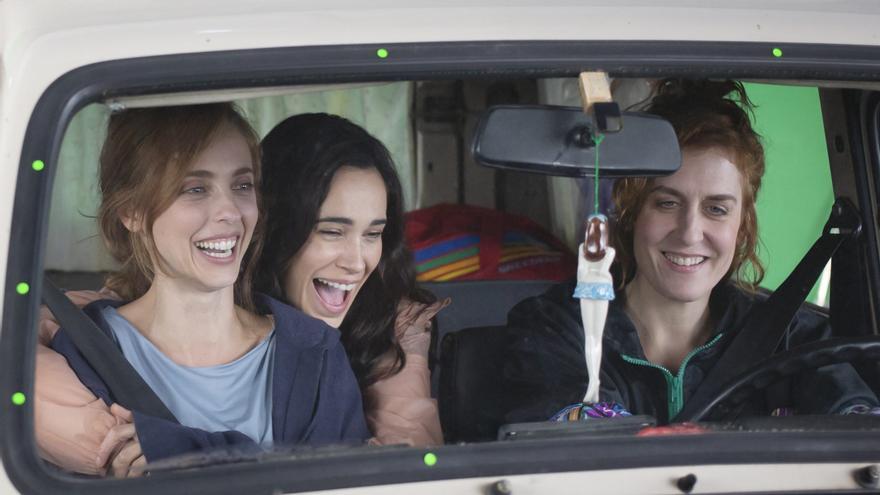 Leticia Dolera placeholder image (Barcelona, ​​1981) returns to recover its women in crisis in the second and last season of ‘Perfect life’, the Movistar + series that earned her two awards at the Cannes festival, the Fotogramas de Plata, an Ondas, two Feroz awards … and a disgust for the controversial dismissal of Aina Clotet for her pregnancy. In this six-episode run, fiction also vindicates the female nude keeping it away from the morbid and sexual connotations and treating it with the greatest naturalness: the creator and protagonist herself appears looking at her vulva. “I really wanted to normalize our body,” he acknowledges.

-Your character, María, begins the season with her debut as a mother, but with postpartum depression. Why did you want to show it?

-When I was writing the first season of the series about four years ago, when I did not even know if it would be produced, a friend told me that during the first year and a half of her son’s life she had regretted being a mother, That had made him feel awful. She explained it to me when the child was already three years old, and it struck me a lot that someone with whom I share almost everything could not tell me before, that she lived it alone. When Movistar + asked me to do the second season, my friend’s story came to me. Also, I think he fit in very well with Maria.

-Because in the first one they leave her and her idea of ​​a perfect life, her life plan is broken, but so many things happen to her later that she doesn’t have time to mourn for that couple and that idea of ​​a lost family. And suddenly he finds a motherhood that was not as he had thought.

-María goes so far as to say that it is not possible for her to be a mother.

-It’s what you feel. She is disconnected from her son because she has not grieved yet, she has not gone through that pain because of everything she has lived through in the last year. In addition, she lives in a social and cultural context where what is communicated to her is that a woman has to be devoted to her child. I have told you the story of my friend, but to write this second season we documented ourselves a lot, we spoke with many mothers and we saw that it is super common to travel where María passes. And what also surprised me, and that’s why it’s in the script, is that it took a lot of women a long time to be able to look at their vulva.

-You appear looking at it this season, it will be a commented scene.

-Well, it is also good that we talk about what happens to us in our pussies. Again the taboo of the vulva, which has to be perfect, eternally young. Now there are even a lot of operations. The state of vulnerability in which the system places us so that we have to get to operate on the vulva so that it is as we are told it has to be! I wanted to talk about that and that women dare to look at our vulva, that they are diverse, different. There are as many models as there are women in the world.

-Aixa Villagrán, who plays her sister Esther, also has an extensive scene of nude from the waist down.

-There is not the intimate journey of connection with your own vulva, there what I wanted was to normalize our body and move it away from sexualization, to show a female body far from eroticism and desire. Naturalizing the bodies, which is another pending thing that we have, the taboo with the body.

-Your character undergoes therapy this year to try to be at peace with herself again.

-The idea of ​​therapy came very naturally to me. For starters, because if you have a character with postpartum depression, they have to go to therapy. And also because I started therapy four years ago and, for me, it is a personal workplace of self-knowledge and that loads me with tools. I am very happy that mental health is now part of the media and political agenda.

-You who usually give prominence to female characters in most of your stories, do you think they are judged more than male?

-It is part of that story of the patriarchal value system where women have to be self-sacrificing mothers or women who are there to please male sexual desire. If we do not fit into one of those patterns, if we get out of that scheme, there is a judgment in society and it seems to be that in most stories as well. Although I want to believe that this is changing.

“It is good that we dare to talk about our vulvas, to look at them, because it is a taboo subject”

-Movistar + has already announced that this second season of ‘Perfect Life’ will be the last. Was it your decision?

-Yes, because right now I don’t feel an impulse, I don’t know if it’s creative, where these characters have to go. I think they have to spend a while where I have left them now. I think that this second season does close the trip they are on, what happens is that life does not stop turning you around. You don’t go through a crisis and that’s it, but things will keep happening to you, because that is being alive. It’s about not fighting with it and trying to surf the waves. But do not surf avoiding them, but go over the waves.

-Do you have a new project already in mind?

-I have arrived from Argentina a couple of months ago, where I have been directing the first two episodes of a series that is created by the ‘showrunner’ and screenwriter Erika Halvorsen, who took a feminist essay called ‘The End of Love’ which will star the actress Lali Espósito [‘Sky rojo’]. Now I’m doing remote post-production, while I’m mulling over a new project, I don’t know if it’s for film or TV …

-Do you see yourself developing a project in which the protagonist is not a woman?

-Yes of course! But hey, at the moment what I get is this. In fact, in my second short film the protagonists are men.

-What is your perfect life?

-Well, it doesn’t exist. There is life, which is a wonderful miracle.

– And your life has been turned upside down many times, as in the poster of the series?

-Yes, and more times he will keep turning me around. That is why it is good to go to therapy, to have the tools so that those turns do not block or paralyze you, but are one more step.