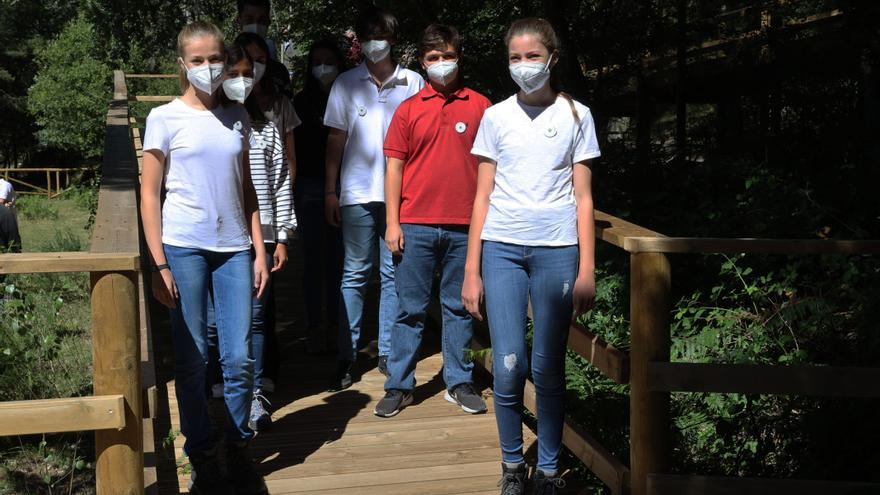 The princess Eleanor and the Infanta Sofia they have dedicated their first official act, alone and without the kings, to show its commitment to the environment, joining the European campaign “A tree for Europe” by planting beech paths in a centenary forest.

In jeans and a T-shirt, with good field shoes, the 15-year-old heiress to the throne and her sister, 14, have joined some thirty boys and girls their age to tour part of the Hayedo de Montejo and plant media dozen trees on the occasion of the World Environment Day.

The beech forest, located in the Madrid town of Montejo de la Sierra, About 90 kilometers from the capital, it has been listed as a Cultural Heritage of Humanity since 2017 and is part of the Sierra del Rincón Biosphere Reserve.

It is an impressive forest on the banks of the Jarama River, where a team of 8 forest managers cares for some 30,000 beech trees, a dozen of them over 300 years old and classified as “singular trees” in the Community of Madrid.

At the foot of the most representative of them, the “Rock beech”, A venerable specimen that grows on a rock ledge on the hillside, the princess and the infanta have joined a group of young people with whom they have planted five beeches and a yew tree.

The beech is a very slow growing tree. In fact, Eleanor of Bourbon and his sister have planted individual specimens about 50 cm high, which according to the explanations of the forest rangers would be about 10 or 12 years old.

The boys and girls, all between 14 and 16 years old, of 11 different nationalities, but mostly students from Madrid schools, have traveled along the Senda del Río together with Leonor and Sofía accompanied by forest rangers who have explained to them the peculiarity of this forest, which is the southernmost beech forest in the European Union.

It is about 100 hectares of beech trees in Monte del Chaparral, a 250-hectare forest declared Biosphere Reserve in 2005 and Natural Heritage of Humanity in 2017, the most important international recognition for a natural space.

The visit of Leonor and Sofía and the meeting with the boys and girls of their generation is an event organized by the Office of the European Parliament in Spain as the culmination of the campaign “A tree for Europe”, which the President of the European Parliament, the Italian David sassoli, launched in August 2019, the objective of which has been to encourage the mayors of all EU countries to plant trees in their municipalities and involve the youngest in caring for biodiversity.

In Spain, 610 localities have joined the initiative, which have planted a total of more than 25,000 trees.

The organizers of the “A tree for Europe” campaign have been the members of the “Team Europe”A group of young university students whose objective is to bring their generation closer to the EU and encourage European institutions to listen to young people, explained its president, Julia Fernández.